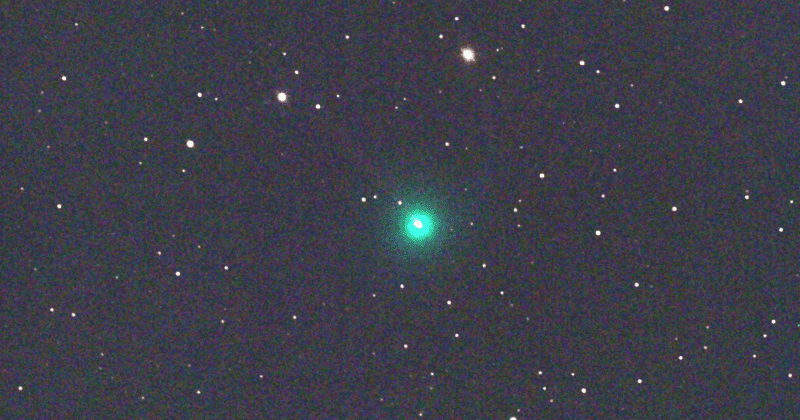 Eager stargazers will now be able to see the Comet SWAN in the night sky with the naked eye. The greenish-blue comet along with its 11 million-mile long tail will be visible starting tonight, as it journeys towards the Sun. The astronomical traveler can be best viewed from the southern hemisphere. But fret not, according to astronomers, those in the northern hemisphere will still be able to see it low on the horizon in the pre-dawn hours, reports the Daily Mail. The heavens are giving us all a reason to look up even in these particularly hard times.

This is how comets greet: by wagging the tail! Hi Earthlings!#FollowTheComet! https://t.co/xpdOFvvNUn

The NASA/ESA solar flare monitoring spaceship captured the spectacular image and it's gorgeous. So just imagine seeing it with your very own eyes.  SWAN actually stands for the Solar Wind Anisotropies camera on NASA's Solar and Heliospheric Observatory (SOHO). It is currently about 53 million miles from the Earth and is getting brighter as the weeks pass. It will head northwards towards the Sun and is currently at its closest to the Earth. It will then come roundabout after it orbits the Sun on May 27. This comet is expected to be a "significant" comet in terms of visibility, according to the European Space Agency. Binoculars are recommended for a better viewing experience, of course.

"As for the cool-factor, I would give it a big resounding MAYBE," Tony Philips, an astronomer, and writer who runs the website spaceweather.com told The New York Times. "It just depends on how the comet reacts to solar heating as it approaches the sun in the next few weeks." He recommends cautious optimism for the viewing of the comet. Space.com also warns enthusiastic stargazers that what we see in the photographs is not what we're going to get to see in the sky. Even small telescopes, they say, won't replicate the long comet tail which can only be achieved with the help of a long exposure. For us, the tail will be a fraction of the length we are expecting to see. The comet is now as bright as the faintest star that is visible to us in the night sky.

The small break is over, my dear Earthlings: I am getting brighter again! #FollowTheComet!https://t.co/8INpy16aB4 pic.twitter.com/JR8a8DaNPK

"I don't like what I'm seeing in F8 SWAN's light curve," Robert Pickard, a member of the International Comet Quarterly (ICQ), noted in a post to the ICQ Facebook group. "I see an outburst, followed by fading, then some recovery, then more constant fading." Michael Mattiazzo, the amateur astronomy enthusiast, who was the first to discover the comet in April had a similar theory. "Two brightness surges, followed by a drop in activity," he said of the comet. "My guess is that it will outburst again before finally disintegrating." Mattiazzo is a resident of Swan Hill, Victoria, Australia. Although a pathologist by profession, the COVID-19 outbreak gave him some time to focus on his hobby of stargazing which was when he chanced upon Comet SWAN.

Hello Earthlings! This is me as seen from Alabama! #FollowTheComet! https://t.co/mP9Ufcjn0T

"I discovered this comet by searching SOHO data on a public website," Mattiazzo wrote on his website. "On 2020 April 9, I downloaded the latest SWAN comet tracker animation map and noticed a steadily brightening, moving object that did not correspond with a known object. There were 5 other known comets detectable in the data. It takes plenty of patience and experience at looking at the data because there are many false positives due to its low resolution and background sources, especially in the milky way region," he wrote and stated that the next challenge was to find the comet in the sky. This comet is officially named, C/2020 F8 and is mainly composed of frozen gases which is why it glows brighter as it approaches the sun.

A new #comet was discovered last month by amateur astronomer Micheal Mattiazzo from Australia. Just, he did not look at the sky to do so. He inspected images from #SOHO, our Solar and Heliospheric Observatory.