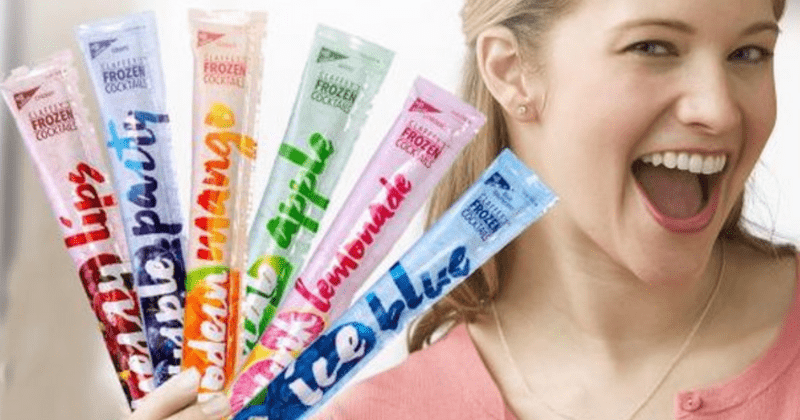 Summer's right around the corner and that means my diet is about to consist of only one thing - frozen sugary sweet treats. No summer barbecue or party is complete without popsicles, ice lollies, softies, or whatever cold dessert you fancy. While these sweet treats are nice and all, I can't help but feel like they were so much more satisfying when I was younger. However, Costco's kicked things up a notch and now stocks the adult, I-do-my-taxes version of the popsicle - boozy "frozen cocktails." I don't know what sounds more refreshing (or classy, duh) than lounging by the pool with a couple of these frozen wine popsicles, to be honest.

According to PEOPLE Magazine, some customers have spotted these boozy popsicle sticks on the shelves of certain Costco outlets. Known as Claffey’s Frozen Cocktails, they're about 110 ml and made with orange wine. So, if you can't step out into the citrus orchards of Florida or Hawaii this summer, be prepared to feel like you're sippin' on some fresh oranges with these frozen wine cocktails.

And the best part? They're only 90 calories per popsicle. Technically, this means I'm still working on my beach bod while treating myself, right? I mean, come on, even 350 grams of straight up, diced watermelon is at least 100 calories and those are not going to get me wine drunk and happy. Claffey’s Frozen Cocktails are also healthy in other ways - they don't use artificial flavoring, relying instead on the natural sweetness from cane sugar to sweeten their popsicles.

What's more? They're completely free of gluten. To all my gluten-allergic beach babies, these frozen sweet treats were obviously made just for you. They come in six delicious, boozy flavors, all in fun, summery names, including Apple, Cherry Lips, Pink Lemonade, Ice Blue (blue raspberry), Modern Mango and Purple Party (grape). By volume, they are about six percent alcohol, so depending on your alcohol tolerance level, you may even get to try all six flavors and still be able to distinguish one from the other.

A 12-pack of these boozy bad boys will set you back about $17.99 at Costco (though PEOPLE reports that they are not available on the Costco website just yet) or you could purchase some online from Emilio’s Beverage Warehouse for $20.99, or Ranchos Liquor for $21.99. Are these alcoholic ice lollies reason enough to finally shell out for a Costco membership? I'll let you think about that for a little bit (though - yes, totally yes).

These sweet treats were first found by the Instagram user The Costco Connoisuer who took to the social media platform to enlighten everyone else. The user uploaded a photo of Claffey's Frozen Cocktails on the shelves of their local Costco, stating in their caption, "Spotted. Claffey’s Frozen Cocktails at Costco! All natural, wine cocktails, come in six amazing fruity flavors: Cherry Lips, Pink Lemonade, Ice Blue, Modern Mango, Apple, and Purple Party. Naturally gluten-free, 6% alcohol by volume, and only 90 calories each!"

As per the official Claffey's website, their frozen cocktails are about to hit the shelves at local Costco outlets in the states of Florida, Texas, Pennsylvania, New Jersey, Mississippi, Alabama, and Georgia any day now. But if you're anything like me and just can't wait to get your hands on these sweet treats, you're better off sending an email to customerservice@claffeyscocktails.com demanding that they line your nearest supermarket's aisles with their boozy icicles. Politely, of course.