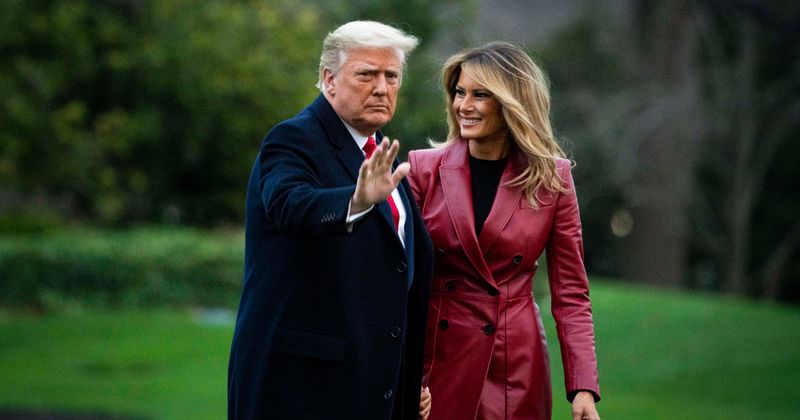 There is now a website through which you can book Donald Trump and his wife Melania for personal appearances. The website, 45office.com, allows visitors to book the former POTUS and FLOTUS for events. Users “interest[ed] in inviting Donald J Trump or Melania Trump to participate in your event” are instructed to use a form provided, reports The Guardian. The form asks questions such as “Will Media be Present?” and whether any “Notable Attendees” are expected. The website also offers personalized greetings for occasions such as “Birthday (adult), Birthday (child), Birthday (veteran), Military retirement, Wedding, Wedding anniversary, Condolence, New baby welcome, Graduation, Girl Scout gold award and Eagle Scout award.” A statement for greetings on Trump’s website reads: Thank you for your interest in receiving a greeting from Donald J Trump and Melania Trump for your special occasion. Please allow up to six weeks for processing of your request.

Want to book Donald or Melania for an event? Trump has a new website for that https://t.co/rQlDCOvXCM

The website has been created, it says, to preserve "the magnificent legacy of the Trump Administration, while at the same time advancing the America First agenda. Through civic engagement and public activism, the Office of Donald J. Trump will strive to inform, educate, and inspire Americans from all walks of life as we seek to build a truly great American Future. Through this office, President Trump will remain a tireless champion for the hardworking men and women of our great country – and for their right to live in safety, dignity, prosperity, and peace."

Want to Book Donald or Melania Trump for an Event? Trump’s Brand New Shameless Website Let’s You Do Just That https://t.co/uXpMfBRTmm

Donald Trump, who has always been vocal with his opinions in the past, has not received much of the limelight lately. Trump had been removed from various social media platforms in January, following riots by his supporters on the Capitol building in Washington. Defending the ban at the time, Facebook chief Mark Zuckerburg said, "We believe the risks of allowing the president to continue to use our service during this period are simply too great."

NEW: Facebook has removed a video featuring former President Trump, a company spokesperson said Wednesday, citing his indefinite suspension from the platform. The video was posted by his daughter-in-law, Lara Trump. https://t.co/DVKmBArL6S

Ever since social media platforms banned the former President, there hasn't been much activity to report from the 74-year-old. Until recently that is. Donald Trump had his first interview since he left the White House with his daughter-in-law, Lara Trump (who is married to Eric Trump) on her online news show The Right View. However social media platforms swiftly took off the interview from her page. According to BBC, Lara Trump who is also a Fox News contributor posted a video of herself interviewing her husband's father. She later posted a screenshot of an email she received from Facebook warning her of the ban. One message read: We are reaching out to let you know that we removed content from Lara Trump’s Facebook Page that featured President Trump speaking. In line with the block we placed on Donald Trump’s Facebook and Instagram accounts, further content posted in the voice of Donald Trump will be removed and result in additional limitations on the accounts.

Donald Trump suggests he will run for US President again in 2024 in TV interview with Lara | Daily Mail Online https://t.co/Pi4VToKuVN

As we previously mentioned, in the 18-minute video, Trump spoke about “social media censorship, China, Joe Biden, the FAKE NEWS, and a potential 2024 run.” Trump made some comments about how "boring" Twitter had become without him. Perhaps that's why he's put forth a new website? The former President also, unsurprisingly, made fun of political rival Joe Biden saying he "didn't know where the hell he was" when he fell down the stairs on Air Force One. As for another run for the Presidency in 2024, he said, "You do have hope, that I can tell you, you do have hope. We love our country, this country, we all owe a lot to our country, but now we have to help our country.'"

“Every American should be outraged by this because today it’s Donald Trump; tomorrow, it could be you.”@LaraLeaTrump issued a warning after #Facebook removed her interview with former President Donald Trump earlier this week. https://t.co/KvSgdc0upz