trending celebrity people lifestyle news animals
She Was Abandoned As A Baby Due To Albinism, Now She's A Vogue Model

She Was Abandoned As A Baby Due To Albinism, Now She's A Vogue Model 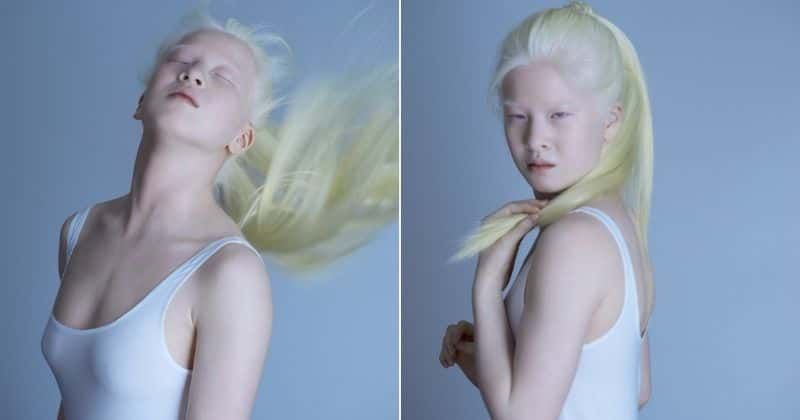 Xueli was a baby when she was dropped off on the ground outside an orphanage. Little did she know her life was soon about to change. Xueli has albinism and looks different from most people. The rare genetic condition is a result of having a reduced amount of melanin or no melanin at all. This makes Xueli's skin, eyes, and hair very pale. She is also sensitive to sunlight. In China, the condition is seen by some people as a curse. But not to the staff at the orphanage decided to name the baby they found outside Xue Li in the most beautiful way. Xue means snow and Li means beautiful. Later at age 3, she was adopted by the Abbing family and moved to the Netherlands to live with her new mom and sister. Now at age 16, she has graced the pages of Vogue and been the face of many campaigns for top designers.

Speaking of her entry into the world of modelling, she told BBC, "I fell into modelling by chance when I was 11. My mum was in contact with a designer who was originally from Hong Kong. She has a son with a cleft lip and she decided that she wanted to design very fancy clothes for him so people would not always just stare at his mouth. She called the campaign 'perfect imperfections' and asked if I wanted to join her fashion show in Hong Kong. That was an amazing experience."

The teen is now hoping to use the platform of modelling to celebrate differences and raise awareness about albinism. She hopes to inspire others to embrace their natural beauty and remind them that it's more than okay to be different.  She said, "In modelling, looking different is a blessing not a curse and it gives me a platform to raise awareness of albinism," adding, "There are still models who are like eight foot two and skinny but now people with disabilities or differences are featured more in the media and this is great - but it should be normal. Models with albinism often get stereotyped in shoots to depict angels or ghosts and it makes me sad. Especially because it perpetuates those beliefs that endanger the lives of children with albinism in countries such as Tanzania and Malawi." She elaborated that  "the way to talk about it is to say 'a person with albinism' because being "an albino" sounds as if it defines who you are. People say to me that I have to accept things in my past but I think that's not the case. I believe you need to see what's happened and understand why but not accept it. I'm not going to accept that children are being murdered because of their albinism. I want to change the world."