The wrestler's body was found on the shore three days after a rip tide pulled him under water while swimming at sea. 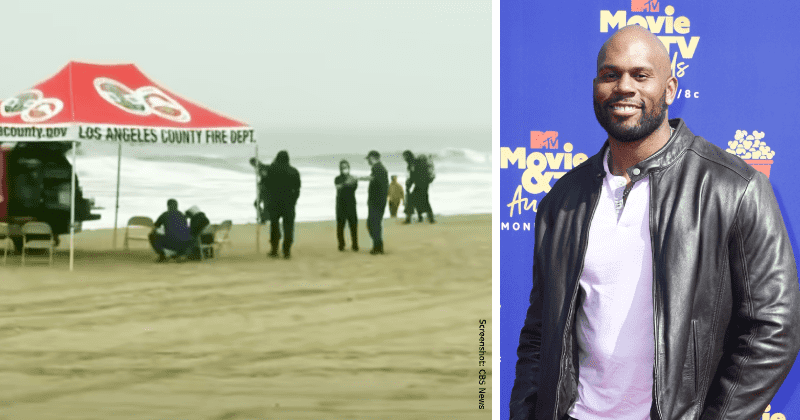 The search for WWE star Shad Gaspard reached a tragic end after his body washed ashore on the California beach, three days after he went missing during a swim. It was a passerby that spotted his body on the shore of Venice Beach and alerted the authorities in the early hours of Wednesday. While there was initial speculation that it might not be WWE star Shad Gaspard's body, the Los Angeles police confirmed that it was the 39-year-old. "The decedent was identified as Shad Gaspard," police said. They informed Shad Gaspard's family, reported The Guardian. Siliana Gaspard, the wrestler's wife of 11 years, along with a few relatives came to the spot and were found grieving and consoling each other.

The WWE star got caught in a riptide while swimming with his son last weekend at the Marina Del Rey, which had just reopened because of the Coronavirus pandemic. Gaspard's 10-year-old son, Aryeh, was rescued by lifeguards and several other swimmers after the pair got caught in the strong currents of the sea. They were not able to save Gaspard after the tide pulled him out to the sea. Many onlookers and rescue guards said Gaspard pointed to his son and asked them to rescue him first.

"That group was stuck in one of the rip currents and were swimming just north of the lifeguard tower. That's why lifeguards were able to get there so soon, but unfortunately, one did, however, submerge," said Pono Barnes, the Lifeguard Specialist, who was part of the team that rescued the boy. The wrestler's son and his wife, Siliana Gaspard, who were present at the beach were heartbroken. "I saw the young boy who was inconsolable and his mother who had her arms wrapped around him. The whole thing was just heartbreaking, absolutely heartbreaking to see this mother and child in complete despair," said an onlooker.

The thoughts of everyone at WWE are with Shad Gaspard’s family during this difficult time. pic.twitter.com/dLRnF6oElX

Other WWE stars led by Dwayne “The Rock” Johnson paid tribute to Gaspard through the day. "Man, this is a tough one. A really tough one. Great guy," wrote the actor and former wrestler on Twitter. "Shad drowned in the ocean, but not before instructing lifeguards to save his 10yr old son first," wrote Johnson as he posted a picture of them together on Instagram. "That’s the love of a father. This is a tough one to process. Love and light to Shad’s family. And your warrior spirit lives on through your son." Wrestler Triple H tweeted his condolences: I join fans around the world as we remember Shad Gaspard as a beloved performer and a caring father. In absolutely tragic circumstances, please keep his loved ones in your thoughts.

WWE released a statement after Gaspard's death was confirmed by the authorities."Admired by friends and colleagues for his warmth and humor, Gaspard was no stranger to heroic deeds. In 2016, he broke up an armed robbery in Coral Springs, Fla., pinning the suspect to the ground until police arrived," read the statement, according to People. "Gaspard was also a multitalented individual, creating his own graphic novel and acting in several TV shows and films, including Brothers and Think Like a Man Too."

Never did the meaning “brother “mean more to me than it did with #ShadGaspard. I’ll never forget the day Shad posted these pics of us early 20 something-year-olds,& illustrating our pathway through life’s accomplishments & into fatherhood side by side 4 20 years!I love u brother pic.twitter.com/jJSDCuWnk5

Gaspard debuted on WWE in 2006 and was known for being one-half of the tag-team group Cryme Time, along with his partner, JTG. After retiring from wrestling in 2010, he moved on to acting, portraying small roles in films such as Think Like a Man Too and The Last Sharknado: It's About Time. Prior to his wrestling career, he worked as a bodyguard for celebrities such as Britney Spears and Mike Tyson.