Marty Jannetty claimed self-defense, saying he would have been raped by the drug dealer if he didn't kill him. 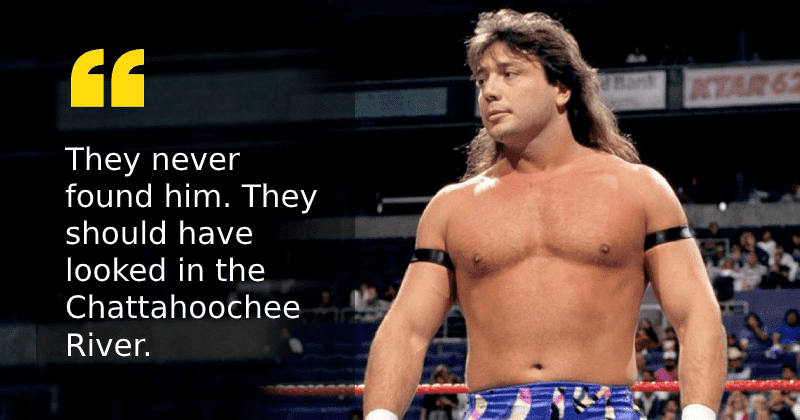 WWE legend Marty Jannetty 'confessed' to murder on Facebook, claiming that he made a "man disappear' when he was just 13-years-old. Marty Jannetty is a popular wrestler and was part of the "Rockers Duo" that featured Shawn Michaels in the 1980s. The 60-year-old took to Facebook to share the incident and added that the man was 'never found' and that 'they shoulda looked in the Chattahoochee River.' Jannetty claimed he allegedly killed a drug dealer after he tried to rape him. Georgia cops have announced that they have opened an investigation based on the WWE star's claims, reported The Daily Mail. Jannetty also stated that it was the 'first time' he had made someone disappear, implying he had killed more people. He addressed the post and claimed he was only acting in self-defense.

Marty Jannetty woke up today and decided to casually confess to a murder. pic.twitter.com/l8yGSq17oO

Marty Jannetty appeared to have made the confession while talking about being heartbroken. He also posted a picture of himself along with a woman. Jannetty said the incident happened as he tried to buy weed. "I was 13, working at Victory Lanes bowling alley buying weed from a f** that worked there... and he put his hands on me... he dragged me around to the back of the building... you already know what he was gonna try to do," wrote Jannetty on Facebook. "That was the very first time I made a man disappear... they never found him... they shoulda looked in the Chattahoochee River." Taking Jannetty's age into account, the alleged incident most likely happened in 1973.

Jannetty said he had kept this a secret all along. "I never told anyone this, even my brother Geno... cause Geno would've killed him, and I didn't want my brother gone, hell he'd only recently came home from Vietnam," wrote Jannetty. The former wrestler made the revelation as he wrote about his alleged relationship with a woman. "Winnie, I like you so damn much, probably my favorite.. but I promised myself way back then, nobody would ever hurt me again.. that includes you.. I loved you but you hurt me with your f**ing Jamaican jealousy.. you can go your own way, I don't need you.." read the post. The former wrestler deleted the post shortly after.

Columbus Police Department launched an investigation into the incident after the post went viral, reported TMZ. "We are going to look into this," said a police spokesman. "The first step will be seeing if we have any missing persons or unidentified remains cases that match the limited information in the post." Jannetty addressed the post as he called into the Boston Wrestling Show. He claimed he was only acting in self-defense. “If I couldn’t haven’t handled myself, that dude would have raped me,” said Jannetty, reported NY Daily News said.

Marty Jannetty woke up and
1. Gave a murder confession
2. Implied it wasn't the only time
3. Revealed where he buried the body. pic.twitter.com/OlMb8J1YEr

The former wrestler claimed the drug dealer grabbed him by his hair and dragged him behind the bowling alley and tried to rape him. “I can’t say he deserved to die, but he deserved to get his a** beat,” said Jannetty. “And, when I was beating him in the head with a brick, I was only trying to beat his ass, I wasn’t trying to kill him." He also responded to the original post confirming he had murdered a man. "That was a billion years ago, plus, I have the satisfaction of knowing that b*tch a** Ninja never got to do that to another kid," he wrote.

Jannetty is no stranger to controversy and was released by the WWE after a domestic disturbance charge in 2005. Jannetty is also a self-confessed addict and has had issues with drugs, alcohol, and sex addiction. He was set to return to WWE in 2007 but failed a drug test which put an end to his career as a wrestler. In a Facebook post in 2017, he claimed that a DNA test proved his daughter Bianca was not his biological daughter. He then called her 'f***ing hott' and asked if it was okay if they had sex, reported NY Post. He later claimed his account was hacked. Last year, he said he was seeking treatment for sex addiction before posting a picture with his alleged counselor and claiming he had sex with her. "You all know I play on here a lot, but I am about to be real," wrote Jannetty. A majority of his Facebook posts are him boasting about having sex.

"I have been partying way too much lately, possibly every day since WrestleMania. I don't know, but I need to stop, but it's just hard, my personality doesn't allow me to be bored. For me going from 350 days a year on the road, and over 100 beautiful ladies per year, to living in backwoods Alabama right now and only doing shows on the weekends, what the hell else am I gonna do during the week?" wrote Janetty in one post. "Drink, smoke a lil plant, possibly throw a lil powder up, then have sex with all the neighbor girls. But it's got to stop," he added.