Ocasio-Cortez also called out Ted Yoho for invoking his wife and daughter as a defense for his abusive language. 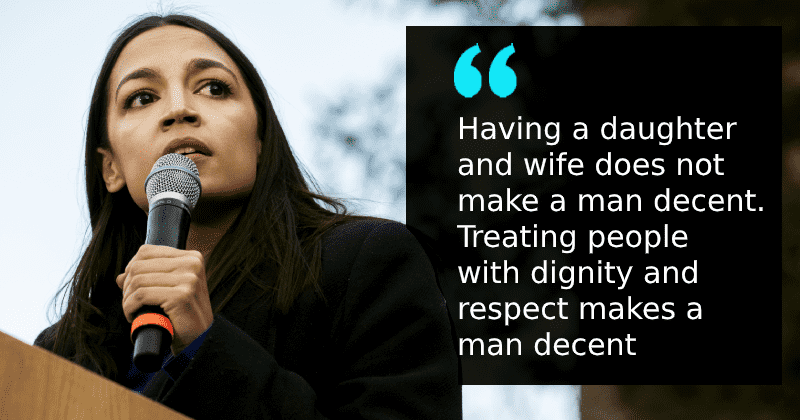 Alexandria Ocasio-Cortez hit back at GOP Congressman Yoho over his non-apology and delivered a thundering speech pointing out that his abuse was representative of abuse entitled men targeted women with. As we reported, Yoho had accosted Ocasio-Cortez on the steps of Capitol Hill and called her a f*cking bitch. After outrage from all quarters, Yoho delivered a non-apology by claiming he didn't utter those words despite a reporter corroborating the claims that he had indeed used abusive language against her. She declared his apology "not acceptable," in a remarkable speech on the House floor, reported CBS News. She added that his abusive tirade against her reflected a "pattern of an attitude toward women and dehumanization of others."

‘This is not new and that is the problem’ — Rep. @AOC called out Rep. Yoho, Trump, DeSantis, and ‘the entire structure’ that upholds sexist, dehumanizing attacks from men in politics pic.twitter.com/Dmeun7hw5B

"What I believe is that having a daughter does not make a man decent. Having a wife does not make a decent man," said Ocasio-Cortez, referring to Yoho's claims in his 'apology' that he couldn't possibly demean or hate women because he had a wife and a daughter. It's a card that abusive men have resorted to since time immemorial. Not only was Ocasio-Cortez not buying it, but she also called him out for it. "Treating people with dignity and respect makes a decent man. And when a decent man messes up, as we all are bound to do, he tries his best and does apologize, not to save face, not to win a vote. He apologizes genuinely to repair and acknowledge the harm done so that we can all move on." Ocasio-Cortez pointing it out on the House floor that Ted Yoho was no decent man.

There's a lot going on, but there's a reason @AOC's speech today on the House floor is resonating. She says what for too long has gone unsaid. Silence is not an option. The moment for reckoning with misogyny and harassment, in Congress, and in the country, is here.

It was earlier this week that Ted Yoho had accosted the Democratic lawmaker and abused her in full view of a reporter from The Hill. “Out of nowhere, Yoho comes up to me and puts his finger in my face and flies off in a rage," AOC told Yahoo News, before adding that he started shouting at her, calling her crazy and shameful. “At first I tried to talk to him, but that just made him yell over me more,” she added.

After Yoho invoked his daughters in his defense, Ocasio-Cortez turned the tables on him. "The harm that Mr. Yoho levied, tried to levy against me, was not just an incident directed at me but when you do that to any woman, what Mr. Yoho did was give permission to other men to do that to his daughters," said the Congresswoman. AOC said she couldn't let girls and women know that Yoho's behavior was acceptable. "Representative Yoho decided to come to the floor of the House of Representatives and make excuses for his behavior, and that I could not let go. I could not allow my nieces, I could not allow the little girls that I go home to, I could not allow victims of verbal abuse and worse to see that, to see that excuse and to see our Congress accept it as legitimate and accept it as an apology and to accept silence as a form of acceptance. I could not allow that to stand which is why I am rising today to raise this point of personal privilege."

“What I do have issue with is using women—our wives and daughters—as shields and excuses for poor behavior. Mr. Yoho mentioned that he has a wife and two daughters ... I am someone's daughter, too.”

Such a powerful speech by @AOC: pic.twitter.com/X7XSXmcuHB

Ocasio-Cortez was responding to Yoho's non-apology after the Republican claimed he had said "bullsh*t and denied that he had used any profanity. He then used his wife and daughters as cover. "You can have daughters and accost women without remorse. You can be married and accost women. You can take photos and project an image to the world of being a family man and accost women without remorse and with a sense of impunity," she said. "It happens every day in this country. It happened here on the steps of our nation's Capitol. It happens when individuals who hold the highest office in this land admit, admit to hurting women, and using this language against all of us."

aoc's floor speech moved me. men are often socialized to feel entitled to your attention, concern, or submission. the moment you refuse to give it, you could risk violence. we know this, too well, from strangers and lovers, parents and children, neighbors and pastors

AOC added that she wasn't expecting an apology from Yoho. "I do not need Representative Yoho to apologize to me. Clearly, he does not want to. Clearly, when given the opportunity, he will not, and I will not stay up late at night waiting for an apology from a man who has no remorse over calling women and using abusive language toward women," she said. Ocasio-Cortez said she wasn't going to stand and take abuse meekly. "My father, thankfully, is not alive to see how Mr. Yoho treated his daughter," said AOC. "My mother got to see Mr. Yoho's disrespect on the floor of this House towards me on television. I am here because I have to show my parents that I am their daughter and that they did not raise me to accept abuse from men," concluded AOC.