One of the most popular ones is where a woman named Mell Hall showed how easy it was to spike drinks in five different ways. 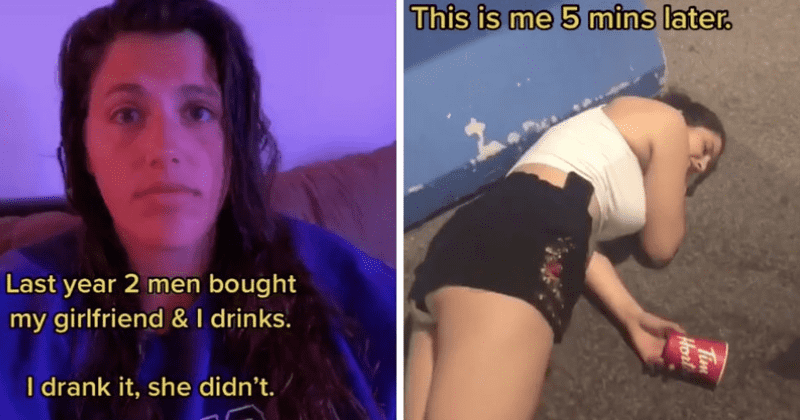 Off late, women on TikTok have been sharing videos of how to protect their drinks from getting spiked. Now there are a lot of sleaze bags and creeps out there waiting for a moment to put their devious plans to practice. Drugging oblivious people at parties and other gatherings and later sexually assaulting them has become all too common. There are numerous stories of women being victims of sexual assault and date rape. Mell Hall, a Toronto resident, recently posted a TikTok sharing how easy it was to spike drinks using a glass of water and some popcorn kernels. Filmed in her kitchen, she just thought of the idea in order to warn other girls but never expected it to go viral and being viewed millions of times.

Hall dropped the kernels in five different ways—by handing money over, extending a hand to shake, picking up the adjacent glass, bumping into the counter by accident, and making conversational hand gestures. Each time the popcorn kernel (representing the drug) was dropped discreetly. Speaking on how she started to make the videos, Hall said, "I made it in response to a comment on another one of my videos. I had been talking about how coasters are a simple and effective way to protect your drink. There had been some comments from people who felt this was paranoid or unnecessary. The comment I decided to respond to was about whether or not a drink being spiked while you’re holding it is actually noticeable. I decided the best way to respond and explain the risk was with a video.”

There's A TikTok Trend Where People Show How To Protect Someone's Drink From Getting Spiked https://t.co/lduv6OjhDH

According to Buzzfeed News, Hall spoke about choosing videos as a medium to convey the message and about used things in her kitchen to bring the message home. "A visual would be clearer and have a greater impact. So, I searched my kitchen for something pill-sized and got to work," she said. Talking about the trend of videos warning against spiked drinks, she said she was happy many of them were making them and also highlighted the seriousness of the issue. Another TikToker who has been making videos on the issue is 26-year-old Stephanie Tavares, from Montreal, Canada. Tavares said she started making them after an experience of consuming a spiked drink herself at a bar. While her friend also got the drink, she chose not to drink it while Taveres decided to go ahead—and passed out in 5 minutes.

i got roofied last year and i was only drinking water. its something i never thought would happen to me bc im very vigilant but all it took was setting my drink down for one moment. i was totally disoriented and couldve really gotten hurt, please stay safe

"I wanted to remind people that it’s not just a funny trend, that it’s an actual serious issue with dangerous consequences," Tavares said. What's worrying is that there were a number of comments in her videos victim-blaming her. But these were a small number and she said the majority of the comments have been positive of what she was trying to convey.  She said "...because I accepted a drink — that happened to be spiked — a bunch of people are telling me it’s my fault, that I should have known better, and to never accept a drink from a man," Tavares added a lot of people who engaged in this kind of abuse were not usually held accountable and that bringing awareness to the subject was something that was needed extensively.

In the TikTok videos, people are seen playing Kendrick Lamar's "Money Trees" in the background while putting in text their stories of being given spiked drinks. The trend was created by TikTok user @enoughliv, according to Buzzfeed News.