trending celebrity people lifestyle news animals
People Are Sharing Their Stories To Show How Unfair And Cruel Student Loans Are. What's Yours?

People Are Sharing Their Stories To Show How Unfair And Cruel Student Loans Are. What's Yours?

While education loans were made available, the cost of education shot up and shifted more money to banks and the rich. 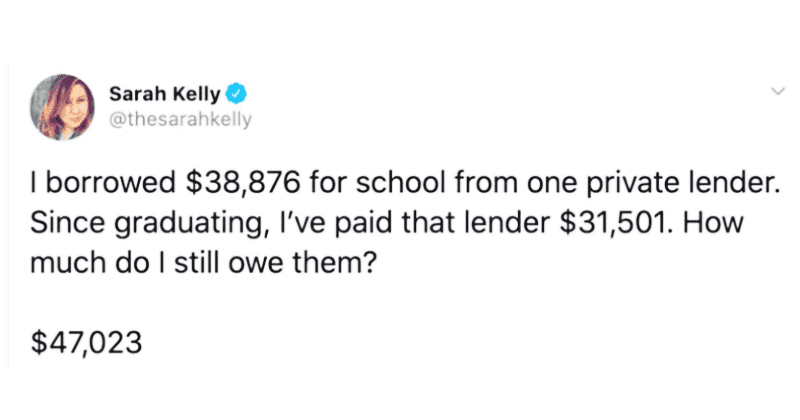 The American dream is being weighed down by student debt, stifling the future of the country. A Twitter thread by Sports Illustrated editor Sarah Kelly highlighted the problem of student debt in the country and showed how richer people got access to education at a lower cost when compared to those with lesser means when it should be working the other way around. Kelly wrote: I borrowed $38,876 for school from one private lender. Since graduating, I’ve paid that lender $31,501. How much do I still owe them? $47,023. She then points out that those who with lesser means ended up being stuck in a vicious cycle of debt. She wrote: These are not my only loans, just the dumbest and highest-interest loans. The *current* cost of tuition at the University of Kansas is $10,092 a year so wealthier families will actually pay a tiny fraction of what I will have paid for the same education.

So anyway everyone please remember that student loan debt is a structural problem, not a personal problem, and that usury is a sin. And Rock Chalk.

Kelly made the thread to also remind those burdened by student debt that it was a "structural" problem. While education is often touted as an escape route from poverty, the system was clearly designed to obstruct those with lesser means to climb up the financial ladder. Millennials have for long been labeled irresponsible by boomers but a rigged financial system and the economy is fighting tooth and nail to make it harder for them to buy a house and live a debt-free life.

Wow! Great job, @RachaelBL . You have successfully identified the system level problem. Thats the very first step. Now we must begin to dismantle these oppressive institutions and this capitalistic BS ideology that it's fine to get rich off of someone else's struggles.

Bernie Sanders and Elizabeth Warren were among the Presidential candidates who promised to cancel student debt, so millennials could get a decent start in their career. "We are going to forgive student debt in this country. We have for the first time in the modern history of this country a younger generation that if we don't change it, and we intend to change it, will have a lower standard of living than their parents, more in debt, lower wages than their parents, unable to buy the house that they desire," said Bernie Sanders at the time.

Sanders had intended to tax Wall Street to pay off the student debt. The Vermont senator pointed out that the taxpayers bailed out Wall Street during the 2008 financial crisis and now it was time for Wall Street to repay the American people. “Congress voted to bail out the crooks on Wall Street, do you remember that? They provided seven hundred billion in federal loans and in addition trillions of dollars in zero or very low-interest loans. So I think the time is now for Wall Street to repay that obligation to the American people. If we could bail out Wall Street, we sure as hell can reduce student debt in this country,” said the senator. Unfortunately, Democrats sidelined Sanders and Warren and opted for Biden, while Republicans nominated Trump for reelection. Donald Trump actively worked to gut the existing student loan forgiveness program.

After Kelly shared the tweet about her loan, countless others shared similar tweets revealing what Kelly had claimed — a structural problem. One twitter user wrote: My law school loans been over $200k since I graduated 8 years ago lol. I pay between $1-2k every month. principal hasn't been touched. love it.

I did the math last night and on my $50K in student loans, I've made payments totalling about $50K over the last 12 years.

of course, in years past, higher education was also never intended to be treated as a "thing anyone except the wealthy accessed" and the student loan debt is their vengeance on ordinary people being allowed to know things

Work myself to death since healthcare is a debt sentence & social security won’t exist by the time I’m of “retiring age”. Or just wait for the nuclear apocalypse. #millennialretirementplans pic.twitter.com/fsadjbOn0l

Hope we don't die in our chairs during a meeting that could have been an email.#MillennialRetirementPlans

I borrowed about $100K (had to) & now owe almost $140k. I'll never get out from under these student loans no matter what I do (teacher). They'll be causing me anxiety, sleep deprivation, & preventing me from doing things I want to do w my life literally until I die. Sucks.

I have student loans totaling $260k. I will never be able to pay them off. Income driven repayment is the only way I can live life. The system is so broken and it needs a change