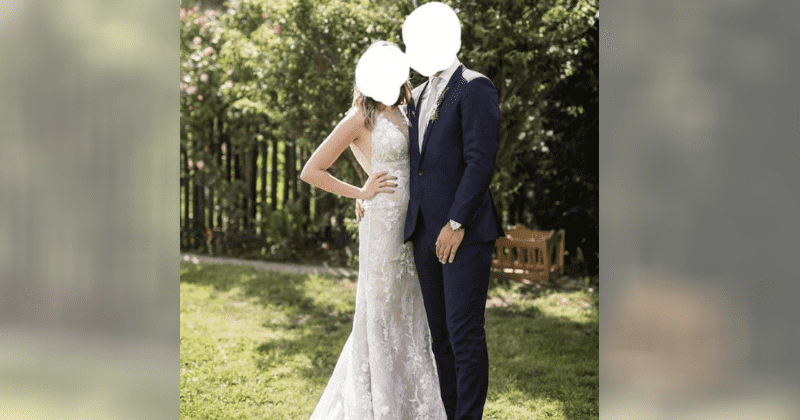 There are certain unspoken rules when it comes to weddings. The first rule is to never wear white, especially a white gown or dress to the wedding unless you are the bride. However, there are rebels among the guests who just find ways to upstage the bride. Either as a way to be the center of attention on someone else's special day or losing a bet, wearing a white gown when you are not the bride is not seen as acceptable - even though all the men look identical. It's something you just don't do. When a Redditor uploaded a picture of a woman and a man from what looked like their wedding day, everyone was shocked to find that they were actually siblings.

The caption on the photo read: This girl looked absolutely gorgeous, stunning, and every other word for perfect. But she is NOT the bride. You had one job to keep with one rule and still... The picture was posted in the Wedding Shaming subreddit, a place on the internet dedicated to "shame wedding themes, brides, grooms, wedding party, in-laws, outlaws, guests, Uncle Bob, vendors... you name it, we shame it!"

Judging from the responses on the post, this woman is not the only one who has turned up at a wedding in a white wedding gown-like dress.

Ladyyjustice wrote, I went to a wedding where a woman wore a white dress to the ceremony and then went home and changed into a different all-white dress for the reception. They weren't wedding dresses but I mean, really? You had 2 chances, sis. User Mulchdiggumz had something like this happen to her from a person who would soon be her mother-in-law. She said, My MIL wore a custom made white gown to my wedding. Custom. Made. She could have picked any color. Was even a similar cut to mine... she said the only color that looks good on her is white - her daughter got married this weekend and she wore blue so probably not true. She also told me not to worry that she bought a black shawl so we would not "clash in pictures"....her words lol.

The original poster did some more digging and found another picture from the wedding with the woman standing next to the bride. While the bride wore a plain white dress, the other woman's dress looks much fancier. They also found out that the other woman was the bridegroom's sister. In screenshots explaining how this discovery was made, someone has explained that they initially assumed the woman was the bride until they found out their second name was the same. Besides, they also saw the real bride. The wedding was also from the Czech Republic where the person thinks something like this would not matter at all.

After this small clarification, Redditors also realized that she was probably the Maid of Honor and she did not have any bad intentions for wearing the dress. User illogicallyalex stated, Those pictures make it seem like it was clearly a planned thing that the bride was probably okay with. The dress matches the bloke’s ties. It sounds like the one posting to the group is making assumptions without actually knowing anything about the wedding itself. If it was a regular wedding guest that turned up like that, then absolutely it’d be horrid, but I get the feeling that mightn’t be the case here.

YeahWTF20 made a sharp observation as well. They wrote, Ok, so that's definitely the MOH. Remember that at Royal weddings, it's common for the BMs to wear white. At Kate Middleton's wedding to Prince William, her sister Pippa was MOH and wore a white dress like that. And going back to the 90s, the Queen's niece Sarah Chatto had about 4 bridesmaids who all wore white dresses that were a version of her own. They added, I suspect that tradition was their inspiration.