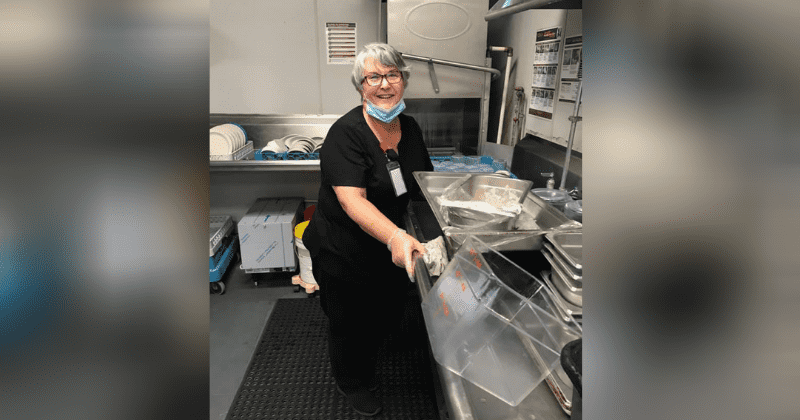 Before the pandemic struck, Mary Daniel and her husband Steve were inseparable. She used to visit him every day at his Florida memory care center. In March, however, the center stopped allowing visitors in due to the pandemic and they were kept apart from each other for 114 days.

According to Daniel, being in isolation took a heavy toll on her 66-year-old husband, who suffers from Alzheimer's. In a stroke of luck, the facility he was recovering at needed a dishwasher. They offered her a part-time dishwashing job and she seized at the opportunity.

"I told them, 'I'm gonna be the best dishwasher you've ever had because I want to be here because I need to be with him,'" she told CNN. Before the coronavirus outbreak was declared a pandemic, Daniel said that she would help her husband get ready for bed each night and they would watch TV together before she would tuck him in. "That was our set routine and then all of a sudden I'm gone," she said. "And he doesn't know why. He can't understand why." After the facility shut down, she said that they tried doing window visits, but this only ended up upsetting Steve and making him unable to carry on conversations. Trying to socialize via FaceTime didn't work out as well either.

When Mary Daniel was told she couldn't see her husband Steve, who has early-onset Alzheimer's disease, at his nursing home, she knew there had to be another way to see him. https://t.co/XSUKdVguyM

57-year-old Daniel said that it's a good thing she can now get to see her husband after she is done with work. That being said, her days are pretty busy scrubbing dishes, mopping floors, and cleaning the kitchen. "It is full on legit, I had to do a Covid test, a TB test, 20 hours worth of video training and a drug test," she said, adding that she was going to use her paychecks to do something nice for the rest of the staff.

Daniel's first shift started on July 3. Steve even happened to recognize her despite the fact that she had a mask on.  "I walked into his room and he said my name, he said Mary, which was also a relief," she said. "So when he said, Mary, and gave me the biggest hug, I mean, we both cried."

"I told them, 'I'm gonna be the best dishwasher you've ever had, because I want to be here, because I need to be with him,'" Mary Daniel told CNN. https://t.co/loUFqFNRow

According to her, Steve is far more relaxed since she has been able to visit him regularly."He came up from behind me and put his arms around the front of me ... which is an incredible feeling," she said, reminiscing a hug during a recent shift. "So, he knows who I am. There's no question, he knows who I am even in a mask."

The emergency order to prohibit visits to nursing homes was declared in Florida back in March. This included assisted living homes, and other long-term care facilities except for families and friends in end-of-life circumstances.

REUNITED AT LAST: Mary Daniel took a dishwashing job at her husband’s assisted living facility just so she could see him. She tells @willganss what it was like to reunite after 114 long days. pic.twitter.com/yDnoA0x9O9

The state has become a hotspot, and officials on Friday reported 11,433 new Covid-19 cases and 93 deaths, according to data on the Florida Department of Health (DOH) website. State Gov. Ron DeSantis recently extended the restrictions this week for another 60 days. "Visitor restrictions have been put in place at communities across our state as a safety measure, aimed at protecting the vulnerable population we serve. But it has been hard on families and residents alike, so we felt creative solutions were necessary, especially in the case of Mary and Steve," said Kelley Withrow, the executive director for Rosecastle at Deerwood, in a statement. "We are happy to report that Mary is off to a great start in her new role, and we are excited to see the positive changes in Steve's demeanor as well."

Ooh! That’s love 💕 & devotion.. priceless... I’m glad ur hubby is doing better.. Alzheimer’s is hard to deal with on a whole, so I’m very happy that u were able to find a way to still b there for him. Lots of love to you both ❣️

Daniel also said that she is appreciative of the hard work that everyone has put in and understands why these rules and regulations are in place. She also went on to urge the state and Gov. DeaSantisa to tweak the restrictions. She has started a Facebook group with other families trying to get back with their loved ones who are in quarantine-zones. "It's incredibly sad to see that these patients are significantly declining because they are isolated," she said. "We are isolating these patients to save them, but the isolation is killing them."