Contrary to popular belief, a heart attack is not limited to chest pain. Thus, it is imperative for women to know about these signs. 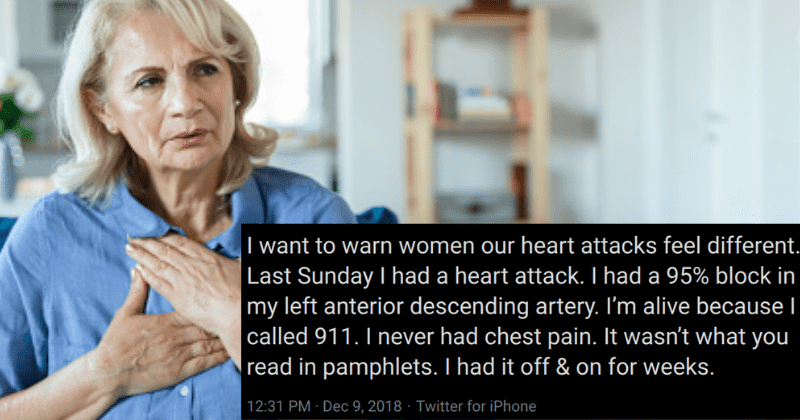 Heart-related diseases are the leading cause of death in America, striking one every 40 seconds (on average), according to the American Heart Association. Around 805,000 Americans experience a heart attack every year, especially women for whom cardiovascular disease, including strokes, are considered the number one threat, claiming nearly 400,000 lives annually.

The lack of awareness surrounding the symptoms of a heart attack could be the reason for so many deaths. That's exactly what Twitter user gwheezie tried to explain in her post as she warned other women of the less apparent symptoms that are overlooked by most. Despite being a nurse herself, gwheezie was unable to deduce that she was having a heart attack because the symptoms did not match the tell-signs. Sharing her devastating experience in a string of tweets, she posted:

I want to warn women our heart attacks feel different. Last Sunday I had a heart attack. I had a 95% block in my left anterior descending artery. I’m alive because I called 911. I never had chest pain. It wasn’t what you read in pamphlets. I had it off & on for weeks.

Explaining her symptoms, she continued: The pain ran across my upper back, shoulder blades & equally down both arms. It felt like burning & aching. I actually thought it was muscle strain. It wasn’t until I broke into drenching sweat & started vomiting that I called 911. Initially, gwheezie brushed it off thinking she had strained her muscle. I’m a nurse. I’m an older woman. I had been spending the week helping my neighbor clean out her barn, I thought I strained some muscles. I took Motrin & put a warm pack on my shoulders, I almost died because I didn’t call it chest pain, she explained.

I was at a funeral Thursday for a woman who was sick all last weekend, starting Friday night...reportedly vomiting and diarrhea. She had had a massive heart attack and flat lined in the ambulance Sunday morning. She was 77. This tweet is important.

The day before my heart attack I drove 6 hours to help my mother who lives in another state. I thought I should go to a dr but I had to help my mom who is 90 & I’d just tough it out because it wasn’t real bad, read another post. I was lucky, I had no idea what hospital to go to, the female medics who picked me up took me to a hospital that does cardiac caths, i had 4 stents placed an hour after I got to the er. That was Sunday. I was discharged thurs & at my daughters house & back to tweeting, she concluded.

I'm glad you're okay. Thank you for sharing. There's heart disease on both sides of my family, so this info might save my life one day. ❤️@threadreaderapp Unroll please.

Twitterati appreciated that the nurse used her experience to raise awareness about the disease. User Suzzane Kilfoy, who also suffered a heart attack in the past, shared: Women experience cardiac episodes different than men. So glad to learn you didn't have to stay in the hospital for long. With second attack I was at Walmart sweating/weak. Husband was in the car waiting out by the door so it was horn and hazzard lights up to the ER. Meanwhile, Wendy Nevett Bazil expressed: So glad you called! My sister died just this way 11 years ago this week. She left work and drove herself to her doctor’s office and collapsed in the waiting room. My MIL also had this sort of pain and died suddenly. I often stress about “how do you know this is different?”

Here are some of the other tweets:

Let's keep this going and raise awareness for the women we love. As a cardiologist I so appreciate this. pic.twitter.com/NWjs4ZQ6qP

Thank you for sharing! Everyone is different and as a FA/CPR/AED trainer many people do not realize that classic heart attack systems don’t always hold true especially with women. Glad to see you are on the mend! 😊😊😊

My aunt had similar symptoms. Pain in her back and shoulder and muscles ache type burning in her left arm. On the way to the mall to Christmas shop, she started to sweat and vomit. They were next to an ER, took her in, she was having a heart attack. All’s well, glad you are, too

Female Heart Attack Symptoms
-Pressure or pain in chest, more than a few minutes or goes away and comes back
-Pain or discomfort in one or both arms, back, neck, jaw, or stomach
-Breaking out in a cold sweat
-Shortness of breath
-Nausea/vomiting/lightheadedness
-Back or jaw pain https://t.co/sncYTddMQb

I had that feeling on and off for a while and then it got replaced with a constant chest pain that refuses to go away! It’s like my heart is in constant pain but I can manage the pain, I think I’ll go to the hospital tomorrow to get that checked out! Wish me luck!

Heart attack affects both men and women differently, thus it exhibits different symptoms. It is not just limited to chest pain, something that most men experience. A study published in the Journal of the American Medical Association (JAMA) revealed, "42 percent of men with a heart attack reported chest pain, compared with 30.7 percent of women." Thus, it is imperative for women to know what these signs are so they can get treatment earlier.

Do you know the five major symptoms of a heart attack? Learn about the signs and how to prevent heart disease: https://t.co/qeu73oSyPd pic.twitter.com/Px4DspPX3I

Disclaimer : This article is for informational purposes only and is not a substitute for professional medical advice, diagnosis, or treatment. Always seek the advice of your physician or other qualified health provider with any questions you may have regarding a medical condition.