The strange incident took place at EDM at Dirtybird Campout in Southern California. 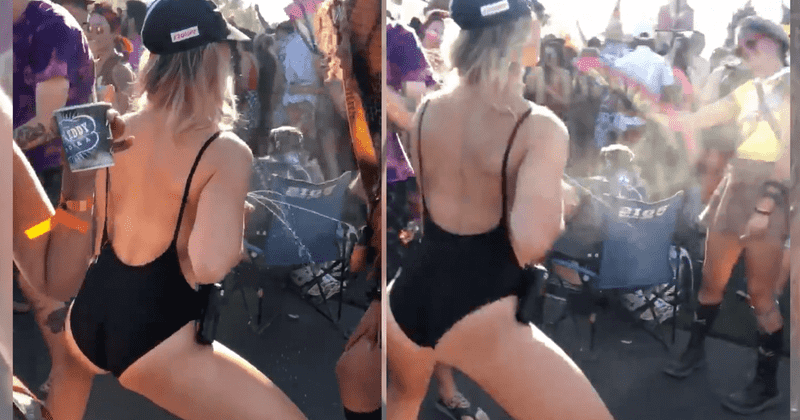 Trigger Warning: This article contains graphic details and videos of indecent exposure that may be disturbing to readers.

The woman continues to dance without a care in the world while everyone around her is stunned. One person can be overheard saying: "Oh s**t. Jesus Christ!" Some can even be heard cheering her on in the video and appear to egg her on. According to LADBible, the footage was filmed at EDM at Dirtybird Campout in Southern California and has since gone viral. Surely people had a lot to say about the "lactating legend". In the comments, one man asked: HOW IS SHE DOING THAT?! Another shared: Yooooo breast milk is like fucken gold and she’s just squirting out like it’s water?!? One woman asked the question that probably every breastfeeding mom was likely thinking: Okay, but how does she produce so much milk? Another had had enough, saying: Good lord, people are disgusting.

Dirtybird Campout, Just when I thought I had seen it all. You never disappoint. Shit got pretty weird #dirtybirdcampout pic.twitter.com/hohsM73ftN

In another incident, a German woman traveling without a ticket sprayed a ticket controller when the latter ordered her and her friend to get off at the next stop for not having a ticket. This diversion helped the man with her to flee from the scene. The 31-year-old woman reportedly ran off as soon as police arrived while officers had to pin the woman down on the ground as she refused to identify herself. According to German news outlet Deutsche Welle, the woman was eventually taken into custody and brought to the police station, where police initiated a criminal complaint for riding without a ticket and grievous bodily harm, the report said. However, she was later released.

And that's not the end of bizarre breastfeeding stories. One woman claims she can squirt milk from her armpit! TikTok user @ollieoooop, a mom-of-three from Minnesota, revealed that breastfeeding moms can experience "pitties," that are lumps or swelling that develop in the armpits when breast tissue becomes engorged, according to The Daily Mail. "Basically, you have breast tissue in your armpits and when you get engorged, sometimes that tissue swells. However, I am the only instance that I know of or that I can find of this specific thing that happens to my body.  I can shoot milk out of my armpit. And if it wasn't disgusting enough just to hear it, I'm going to prove it." The mom proceeds to show how "breastmilk" came out of her armpits after squeezing the area. Some moms who saw the video confessed that they can also shoot milk from their armpits.

What is armpit breast milk, and just how common is it?! Meet one mom who went viral sharing her story and learn more about the phenomenon from lactation consultant Priscilla Medina!https://t.co/ws8jgG2sqH