Denise Miresmaili, from Los Angeles, was able to capture the magical moment of the dolphins jumping in and out of the water. 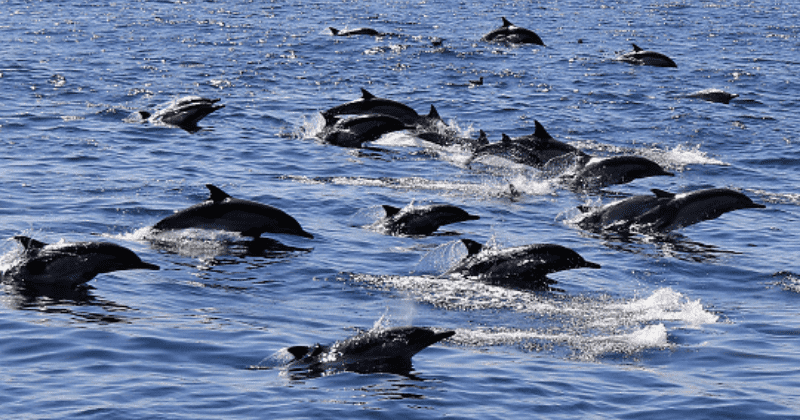 Imagine you are out in the ocean to take your boat out for a spin. The salty ocean breeze feels refreshing. There is no vehicular traffic to slow you down. But then out of nowhere a pod of dolphins are making their way through the ocean. And as their domain, they do get the right-of-way. If this is the type of traffic to stop you in your tracks, it is always worth it. Dolphins are friendly and curious animals and are even called the dogs of the ocean. But sometimes they may shy away to avoid human contact. For them to give us a glimpse of themselves in the wild is always exciting.

This is exactly what happened to a woman who was on her boat. She was greeted by at least 100 dolphins. Denise Miresmaili, from Los Angeles, was able to capture the magical moment of the dolphins jumping in and out of the water. The dolphin pod swam next to her boat near Oceanside, about half a mile from the shore. She got a close look at the dolphins by being in the right place at the right time, reported 6 ABC. She said that the dolphins just kept jumping out of the water and that a flock of birds started following along.

Though it may seem like it is not easy to spot dolphins in the wild, an even bigger pod was spotted a few months ago off the coast of southern California. People onboard a whale-watching vessel had the privilege of witnessed nearly 1,000 dolphins swimming together alongside their boat. The rhythmic jumping in and out of the water was a mesmerizing sight. Spectators on the Dana Wharf Whale Watching vessel watched the “super pod” of dolphins for nearly four hours as per the charter boat company.

“This behavior is known as the Dolphin Stampede, we were the first location to coin the phrase,” the whale watching company stated. “The dolphins take off so fast they turn up the water making it white water, you can hear them swimming through the rushing water. They are so graceful even in the frenzied behavior and we are so amazed to see them right off our coast.” Bottlenose dolphins can be seen off coasts throughout the world and in the United States are not endangered or threatened under the Endangered Species Act (ESA), but they are protected under the Marine Mammal Protection Act (MMPA).

As per National Oceanic and Atmospheric Administration (NOAA), these dolphins happen to be one of the most well-studied marine mammals in the wild. They are much easier to come across in the wild. This is due to the fact that they live close to shore and are distributed throughout coastal and estuarine waters. But this also means that it puts the dolphins at increased risk of human-related injuries and death. But dolphin sightings of huge proportions, all at once are rare but do happen from time to time. One of the largest groups of dolphins, an estimated 100,000, were seen off San Diego in 2013, reported Fox 23. In 2020, a superpod of dolphins was seen off Laguna Beach and in 2019, a large group was seen off Dana Point.