Woman Triples Size Of Her Lips To Be More 'Fashionable': "I Look Prettier With Bigger Lips"

Andrea Emilova Ivanova, 22, from Bulgaria, has visited almost all the clinics across the country and has spent thousands of pounds to get bigger lips. 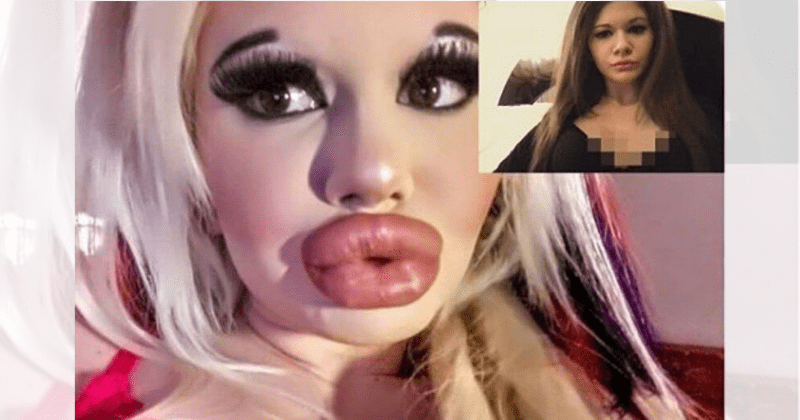 A Bulgarian student is so obsessed with increasing the size of her lips that she has visited almost every cosmetic clinic in the country's capital city, Sofia and has spent a great amount of money to achieve the look she is satisfied with.

But there is no one standard size that she is content with and she keeps on getting work done on her lips again and again. Andrea Emilova Ivanova, 22, claims that she has got a lot of proposals online for her looks.

At the same time, there have been a number of haters who have panned her for her lips. She is however not fazed and continues to pose pictures of herself after a lip job on her Instagram account that has some 15,000 followers, stated a Daily Mail report.

She wants to, in fact, triple the size of her lips to make it more "fashionable" and has had at least 15 procedures done so far pumping in all kinds of lip fillers and gels.

She spends as much as $167 for each treatment and claims to have been obsessed with big lips since she was very young since it made her look "prettier." Ivanova is a student of  German Philology at the Sofia University St. Kliment Ohridski.

Woman TRIPLES the size of her lips in a bid to be more 'fashionable'https://t.co/pTO1CNnCdB

Just when you think you have seen it all Woman TRIPLES the size of her lips in a bid to be more 'fashionable' the world Is beyond repair https://t.co/yH6Qu8D2DT via @DailyMailAU #lips #fillers #craycray

She said, "'I like my lips now, more than before and I feel very happy with them, because I look prettier with bigger lips, and in Bulgaria this is fashion now. I have visited almost all clinics for aesthetic procedures in Sofia and I put in my lips almost all kinds of lips fillers: Princess Volume, Princess Filler, Hyaluronica Vital Esthetique, Apriline Forte, Revolax Deep, and Teosyal."

Talking about her fan following, she said there were a lot of people who liked what she did and she was encouraged by them.

Ivanova said, "I get thousands of compliments on my lips and on my outfit, and on my vision and style every day from people all over the world. I have both positive and negative comments, but women write most of the negative comments. There are people who like me with bigger lips and there are people who like me with smaller lips but it doesn't matter to me, because it's important for me, how I like it. Other people's opinion is irrelevant."

For her, there is nothing like a perfect look. It keeps changing and accordingly, she visits a clinic for a procedure when she feels like.

Highlighting this fact, Ivanova said, "I can't give any indication of how big is too big, or can lips be too big, because for each person: "big" "bigger" and "too big" are different concepts. I'm broad-minded and I think people should be free to choose, which one is for them big, bigger or too big. There are no boundaries for me."

Woman TRIPLES the size of her lips in a bid to be more ‘fashionable’ https://t.co/OGqiY9s4ox pic.twitter.com/5A1bh0iAc4

At this rate, Ivanova might even get her lips so swollen that she could qualify for the world's biggest (artificial) lips, if there was a contest like that. She ironically claims she is not following anyone's lead although big stars and celebrities all over the world have confessed going for lip jobs.

Ivanova said, "Yes, why not? But in my country (Bulgaria) the big lips are fashionable and there are many girls with fillers in the lips too."