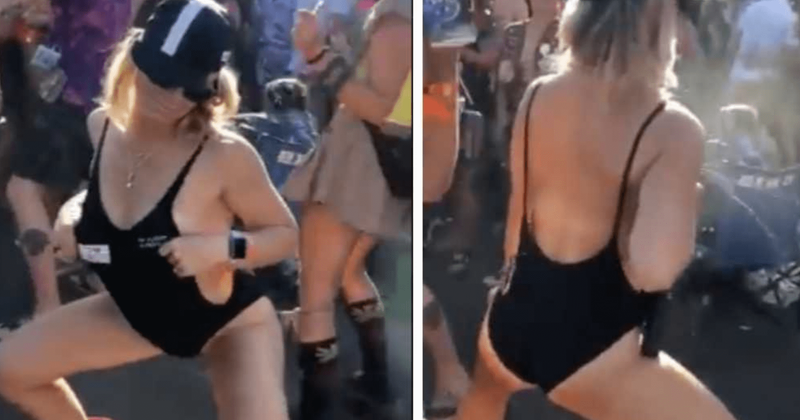 Trigger Warning: This story contains pictures and videos of indecent exposure some readers may find disturbing.

When it comes to dancing, some people have the moves and some don't. In some cases, they are just downright bizarre, such as this woman who was captured on camera two years ago dancing at a dance music festival and spraying breast milk on the people around her. In the clip, captured by a man named Eric Falconi, we see a woman dressed in a leotard, cap, sunglasses, and red boots dancing around a group of people before she whips out her breasts and starts squirting milk on the crowd leaving them gobsmacked. Then, in a disturbing turn, a person appears and crouches down in front of her in a bid to catch some of the milk in their mouth, Cafemom reports.

Dirtybird Campout, Just when I thought I had seen it all. You never disappoint. Shit got pretty weird #dirtybirdcampout pic.twitter.com/hohsM73ftN

The woman carries on unabashedly much to the disgust of some, and amusement of others. One person can be overheard saying: "Oh s**t. Jesus Christ!" as others laugh and appear to egg her on. Upon closer listening, you can also hear people chorusing with "Oh God", and "Oh S**t". Reports suggest that the video was taken at Dirtybird Campout - an EDM festival held in Southern California and garnered millions of views and comments since appearing on social media.

A third replied: "This the kind of shit that makes white people look bad. I’m about to start suing," thoroughly disgusted with what she just watched. Yet another commented: "White people... Y'all have never failed to make me question my existence. And I'm white."  A fourth user wrote: "This is what it means when you turn something so pure and amazing into something corrupted and gross." There were hundreds and thousands of responses to the controversial video with the gist of every comment expressing their disgust at the woman's actions.

Sadly instances such as these are not a one-off. In a similar incident, a woman on a tram in Germany sprayed a ticket taker with breast milk after she ordered her and her friend to get off at the next stop for not having a ticket, Deutsche Welle reports, according to New York Post. Police who investigated the matter said that the 31-year-old woman "exposed her breast and sprayed the ticket controller with breast milk"  when she asked for tickets and then promptly told them to get off for not furnishing them.

She reportedly ran off as soon as police arrived while officers had to pin the woman down on the ground as she refused to identify herself or cooperate with them. The woman was taken into custody and into a police station, where she was booked for riding without a ticket and for causing grievous bodily harm.