After experiencing contractions she gave birth to a baby boy at just 26 weeks but the kicker here is the fact that she didn't even know about the pregnancy. 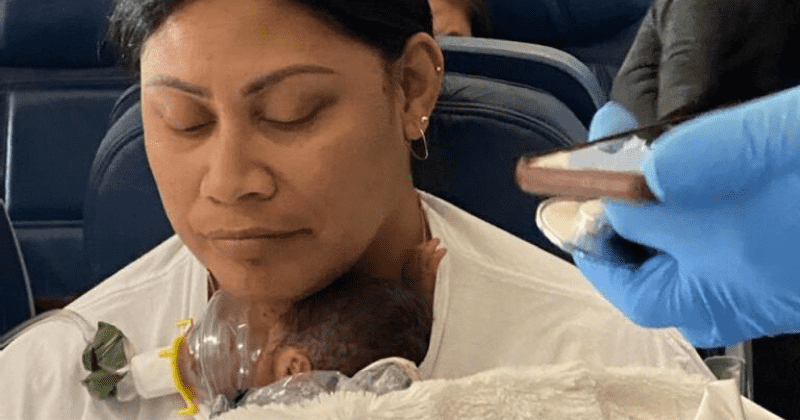 A flight from Salt Lake City to Honolulu was one that changed a Utah woman's life in the best way possible. Lavinia Mounga was on her way to Hawaii with her family on Wednesday, April 28, when she suddenly went into labor. After experiencing contractions she gave birth to a baby boy at just 26 weeks but the kicker here is the fact that she didn't even know about the pregnancy. "Overwhelmed in the best ways," she tweeted the following weekend.

“I just didn’t know I was pregnant, and then this guy just came out of nowhere,” Lavinia “Lavi” Mounga admitted. https://t.co/iVB3nKSZID

Mounga's story went viral after a fellow passenger, Julia Hansen, shared the news on TikTok saying, "A baby was just born on this plane" in a clip. In the footage, passengers on the Delta flight could be seen cheering and congratulating the woman for her incredible achievement mid-air, reports Daily Mail. Surely, people were curious how Mounga was allowed to board the flight in her condition. So Hansen cleared the air after revealing, "To those wondering how she was able to fly in her third trimester, I sat next to her dad on the plane and he said they didn't even know she was pregnant," revealed Hansen."

In the clip, a crew member is heard over the plane's intercom directing the passengers to remain seated "to allow a passenger to seek medical assistance." Thankfully, there were many nurses and doctors aboard the flight, who assisted Mounga with the birth. Following the surprising incident, a nurse from Kansas City named Lani Bamfield took to Facebook and wrote, "If anyone would like to know how our trip to Hawaii is going… here's how it started. We delivered a 26-27 weeker in the airplane bathroom, in the middle of the ocean, with three NICU nurses, a Physicians assistant, and a family medicine doctor we were able to make it THREE HOURS before we could finally land but the baby and mom did great. God was definitely with us up there."

The names of the NICU nurses are Lani Bamfield, Amanda Beeding, and Mimi Ho, and the doctor was Dr. Dale Glenn. They were amazing!!

Mounga and her baby, who she named Raymond Kaimana Wade Kobe Lavaki Mounga, were immediately rushed to the hospital as soon as the flight landed in Honolulu. The baby's father, Ethan Magalei, was equally stunned as he described his son's arrival as "a miracle." Although he wasn't present on the flight to see his son's birth, he was extremely thankful that both mother and child were in good health, per his Facebook post. Magalei went on to thank each and every member who assisted with the birth of their child and expressed his hopes to be "the best dad" to the baby boy.

Lavinia Mounga who had no idea that she was pregnant went into labour while flying to Hawaii. pic.twitter.com/72Gxkur5K8

A spokesman for the Hawaii Department of Transportation, Jai Cunningham, said that the pilot and crew followed protocol and alerted them about the situation before landing. "It was a medical assist, it wasn't deemed a medical emergency so that sort of notifies you that mom and baby were in good shape," Cunningham said. "Then the crew emergency medical services group met them and were able to transport them to a nearby hospital." He explained that this is not something that happens on a flight often. "It's not that common for childbirth, obviously cause most of the time once women get far along in their pregnancy doctors kind of advise them against doing such things cause you're on a plane for five, six, seven hours," he noted.

HONOLULU — A doctor and a team of neonatal medical professionals were in the right place at the right time – helping a Utah woman deliver her baby onboard an hourslong flight to Hawaii.

Lavinia “Lavi” Mounga was traveling from Salt Lake City to Hawaii on April 28 for a fami… pic.twitter.com/nFLKi6YQdY

A Delta Airlines spokesperson confirmed that a baby was born aboard the company's flight. "The safety of our crew and customers is our top priority. Our crews are well trained to manage a number of on board medical scenarios. Every aircraft is equipped with medical equipment and crews have access to expert counsel during flight when an issue occurs," they said. A spokesperson for Kapiolani Medical Center told KHON, "Mom and baby were brought to Kapiolani and are doing good. Mom has been discharged already but baby is still in the NICU as he was born early."