"McRacist": Woman Gets Called Out For ‘White Lives Matter’ Tattoo On Her Arm 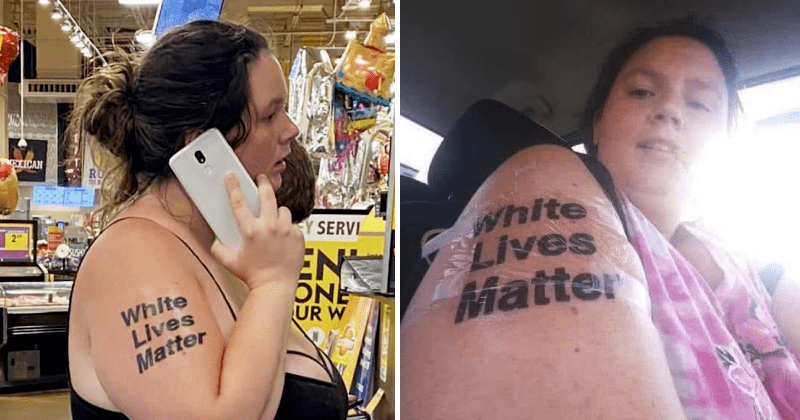 A woman sporting a White Lives Matter tattoo was called out for promoting white supremacy and was slammed on Twitter. In the image posted, the woman can be seen showing off her "White Lives Matter" tattoo on her arm. It's no coincidence that the woman chose to get a tattoo right amidst the Black Lives Matter protests happening across the country. For most white people, their entire personalities revolve around denying the African-American community rights and boasting about their own alleged supremacy. The point of the Black Lives Matter protests is not to deny that other lives matter but to make a case for their own community because it is the African Americans who are being oppressed and killed by the police department. White people have enjoyed all the privileges and cornered a majority of the resources in America but you can trust those who espouse white supremacist ideology to play the victim and make it all about themselves.

A twitter user posted the image of the white woman sporting the tattoo and pointed out that she had chosen the McDonald’s font. One user commented, “Ah yes the McRacist.” Another commented, "At least she’s advertising so we know to avoid.” Another Twitter user called her the "Queen of the Karens." If you're not familiar with the term Karen, it's used to denote entitled privileged white women who deem themselves superior to everyone, especially those from the black community. Most of the all-lives-matter backers are white nationalists and supporters of Donald Trump. This week, 2 All Lives Matter demonstrators were found re-enacting George Floyd's death as a way of registering their protest against the Black Lives Matter march in Franklinville, New Jersey, reported CNN. One of the protestors shouted "Black lives matter to no one," making it very apparent that they all championed Neo-Nazi ideology.

She got the McDonald’s Font pic.twitter.com/YNmMsFsuX3

It's also ok to change your opinion after learning up on the issue at hand. Countless white people have woken up to the oppression of the black community since the video of Floyd's death went viral. For those who have inked racist tattoos, a tattoo artist in Nashville is offering to cover them up for free, according to NewsChannel5. Colby Hunter of Sage & Serpent Tattoo in Inglewood made the announcement on Facebook for those who had a change of heart about racial injustice. "This is something I'm able and capable of doing. If they have made that turn in their lives and want to change their ways, I want to help out and make time for it." Swastikas and SS bolts are some of prominent racist symbols tattooed.

My friend saw her in Kroger in Smyrna, Ga. pic.twitter.com/9eIxbnbPsb

Hunter has stressed that he will offer his services only to people he believes has had a change of heart. "I would like to hear people's stories. It's not just free cover-ups for people who are actively racist. They can stay at home and I won't do anything for them," said Hunter. So if the white woman ever wants to get her tattoo removed for free, she can always reach out to Hunter but, of course, she needs to mean it.

Protests broke out in all fifty states across America after George Floyd, a 46-year-old black man was killed by George Floyd, a white Minneapolis cop on May 25. Derek Chauvin, the white cop, had kneeled on Floyd's neck for over 8 minutes, ignoring the pleas of Floyd to ease pressure on his neck. Floyd died saying, "I can't breathe." The other three cops responding to the case refused to intervene despite multiple bystanders including the person filming the incident begging for them to intervene and rescue Floyd. The sheer apathy of cops towards blacks was evident in the video and it drew shock and outrage. While it was evident that cops were more likely to target the black community, white people didn't imagine it to be this apathetic and visceral. Without video evidence, the case wouldn't have become an issue.