trending celebrity people lifestyle news animals
Woman Heartlessly Dumps Dog On Street While It's In Labor, Spits On Her: "She Ain't Worth It"

Woman Heartlessly Dumps Dog On Street While It's In Labor, Spits On Her: "She Ain't Worth It" 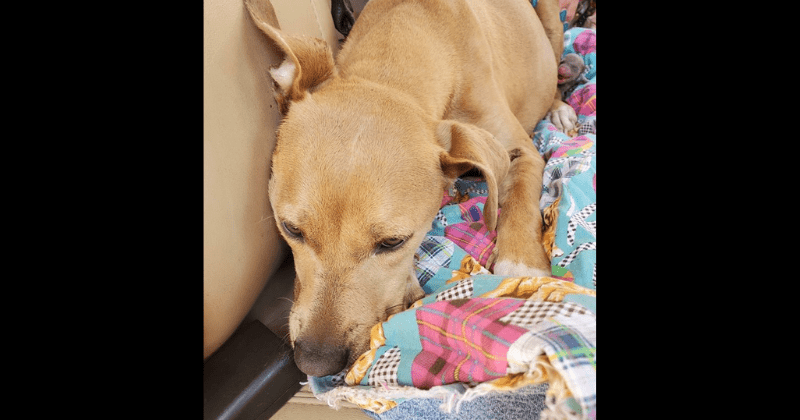 A woman heartlessly abandoned her abused and maggot-infested dog in the street while the poor animal was in labor. She even allegedly spat at the Labrador-pit bull mix, called Annie,  and when rescuers came to save the animal, she said: "She [Annie] ain't worth it". The animal abuser hasn't been identified yet as the incident took place on her driveway in Woodward towards the end of April. It was a gruesome sight as a premature puppy was half hanging out of the dog's body. Other people in the neighborhood saw this shocking sight and immediately alerted rescuers.  Once they arrived, the neighbor told the rescuers that Annie's owner had previously let her other five dogs attack her over a prolonged period. This violent assault led to Annie having open wounds that would be eventually infected with maggots. Police officials are yet to launch an official probe into this case and charge her for her vile treatment of the dog.

Rescuers called to the scene by a neighbor were stunned to see the dog's owner come out and tell them not to bother trying to save herhttps://t.co/WNGl7bIbha

Annie, meanwhile, was rushed to a nearby animal hospital where a veterinarian noted that the new mother suffered from extreme dehydration and malnourishment. The dog's birth canal was completely dry as a result, forcing her to endure painful labor. Sadly, her newborn pups, all ten of them, were either stillborn or died shortly after they were born, Metro reports.

A 1-year-old pregnant dog rescued from abuse in Oklahoma is fighting for her life in Aurora.​ https://t.co/th8PrXXof1

The animal rescue posted about Annie on Facebook on April 29, writing:  #MamaAnnie was left with 6 other dogs to starve. She was found laying in the driveway, PREGNANT, IN LABOR, IN DISTRESS, and BARELY RESPONSIVE — with one baby halfway out. She was vomiting maggots! We learned that she had multiple open wounds that were at least a week old that was infested with maggots. She was rushed to Woodward Animal Hospital where Dr. Didier found her to be extremely dehydrated and malnourished, so much so that it affected her kidneys, she was too dehydrated to deliver her puppies, and she could not produce milk.

The poor bleeding and infected dog had to then undergo emergency surgery for her near-death condition. Annie was then transferred from Oklahoma to Pawsitive Restorations rescue in Aurora, Colorado for additional treatment. Reports stated that she was also put under strong medication prior to an emergency surgery that was conducted so that her damaged skin would not fall out. A spokesperson from Pawsitive Restorations told the outlet: "‘This constant dripping lead to severe dehydration and Annie required round the clock hydration. Her skin was beginning to break down, and if she didn’t have this surgery urgently her skin would begin to slough off of her body."

The human beast that spat on Annie & let her other 5 dogs attack Annie should be taught a lesson,The woman should be whipped as she ain't worth anything.. Woman dumped maggot-ridden dog in labor, spat on her and said 'She ain't worth ihttps://t.co/KA1xX1dU3n

On May 4, Annie underwent another surgery and the vets said that she appeared to be recovering. That being said, being abused caused her to experience vaginal bleeding on May 8 and that sudden occurrence made her kennel look like a murder scene. The dog was diagnosed with varicocele, a rare condition, and her veterinarian is reportedly working to figure out her treatment. Meanwhile, Annie's medical bills have increased to $15,000, with the amount set to rise as her healing begins.

Pawsitive Restorations president Krissy Mosbarger, while talking to KDVR, said that Annie is like a "ticking time bomb" at the moment and that she is determined to give the pooch a second chance: "She’s a ticking time bomb… Her owner said she wasn’t worth it.  She is.. oh she absolutely is. And we are going to show her just how worth she is. Annie will know love in her lifetime."