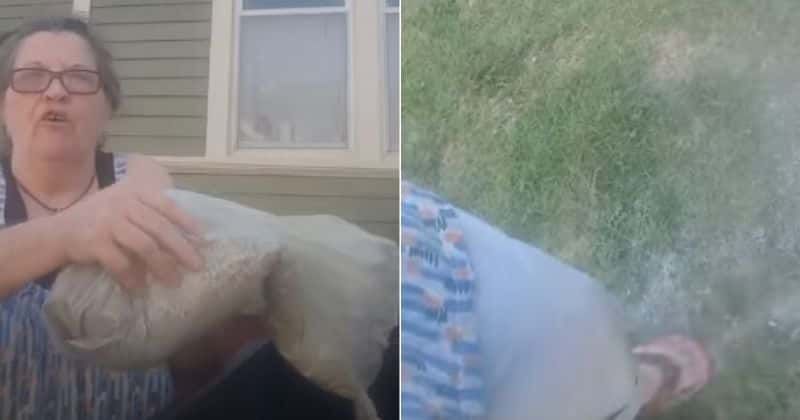 A video of a woman dumping the ashes of her late "nasty bastard" husband into a trash bin has been commended by people online. The woman named Marsher Widener, according to her YouTube account, filmed herself during the cathartic act and explained her reasons for doing so. Widener begins by holding a black box that contains his ashes. She brings it forward to show her viewers the name of her husband, "Donald Lee Widener." She then opens the box and takes out a polythene bag filled with the ashes and begins to slowly pour it into a trash bin nearby as she recounts the abuses he had inflicted on her over the years. His own brother and children didn't want to have anything to do with him.

"Peace in peeps!" says Widener at the beginning of the video, and continues, "Now I know you won't understand why I am doing this. This is Don Widener, and his family don't want him, his brother doesn't want him around, his kids doesn't want him, uh, actually they want him to go in the gutter or the toilet but today where's he going?. To give some context, she explained, "He used to work at the landfill. He drove a garbage truck for picked up for businesses, uh, trash, so we're sending him back to the landfill today." She then exclaims "Alright, here he goes" as she throws the box "into the dumpster."

She then focuses the video on the bag of ash and begins opening it as she says, "This is for all the pain and all the turmoil he has caused my children and myself and what he caused his parents, so this is his goodbye."  She then starts pouring some of the ashes in the trash and says, "So this little bit right here is for all the times he kicked me in the head" and adds rather matter-of-factly, "Yep put my head through a window." The ash dust starts flying around and Widener reacts by saying. "uhh..he's getting on my face" as she tries to wave the dust away and remarks "nasty bastard, nasty." She then pours some of the ash in the ground and says, "Some of him is going on the ground...oh my gosh, we don't want him here" and rubs him right into the dirt.

She continues, "Now he's all smashed into the dirt." She then slowly empties the bag into the trash bin and says "so this is for all the pain and sorry he has created (for) everyone..he is going back to the landfill," and says a final goodbye "ADIOS AMIGOS!" The ash flies all over again and she once again remarks, "nasty bastard, nasty." A viewer, King of Pie2 commented on Marsha's video and wrote: Unfortunate that the ashes couldn't be dumped in hell directly. The landfills the next best thing though.  Another, Carlos PC2 expressed his hope for a better future: Marsha I hope everything is better from now on for you and your family. Danielle Bylsma recounted her own story of being abused: I was raised by my grandmother and she beat me mercilessly and emotionally abused me every day.

She added: My other family members weren't immune to her violence either and when she was cremated we threw her ass in a dumpster too. I'm really glad I I'm not the only one who has done this. I hope you're well and recovering from the pain this person caused you!