Woman Allegedly Burns Down A House After Finding A Large Spider

The fire, which was clearly started intentionally, led police to arrest Alexcia Berry for arson. 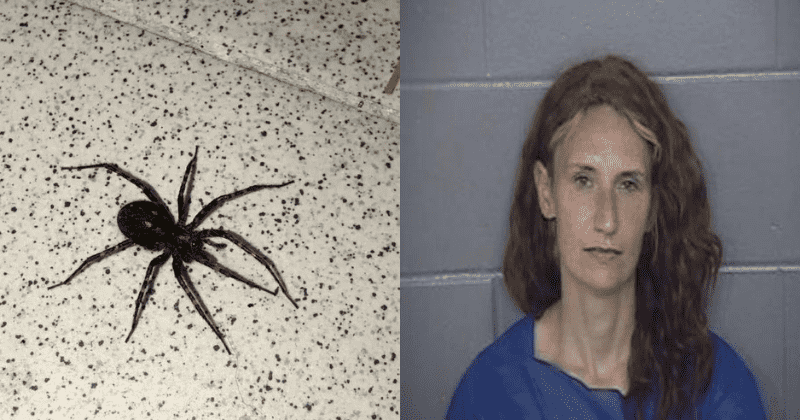 Entomophobia, the fear of insects, and Arachnophobia, the fear of spiders, are quite serious concerns. The discomforting effect that insects and reptiles tend to have on our psyche is well-noted in many a research journal and also in pop-culture references. People will do anything to avoid freaky bugs and absolutely stay clear of them whether indoors or outdoors. However, you wouldn't consider burning your entire house down just to kill a bug or two.

That's exactly what happened in Kansas City, Missouri where one woman actually did the unthinkable because of a certain creepy-crawly, Craft Diply reports. Killing these pesky insects with fire seems to be optimal as it gives you that edge of being well-protected. People who live in Australia or even Arizona may have surplus experience in dealing with unwelcome creatures in their houses and usually resort to using fire to drive them out. Back in KC, a woman in the vicinity of Oakley Avenue and Bonita Street said she saw a huge spider and had to get rid of it. Alexcia Berry ended up burning the entire house down as a neighbor even submitted a surveillance video of the incident to the police.

A Kansas City resident sent surveillance footage to police which helped them track Alexcia Berry down.

The fire, which was clearly started intentionally, led police to arrest Berry for arson. After taking her into custody, she admitted to starting the fire. She said that she did start the blaze but had a 'good reason' for doing so. She told the police that she was provoked into the arson by a big spider. The best (or worst) part about all this is that there's no word on the spider's condition and she didn't actually see it die. However, given the circumstances that a house burned down as a result of arson, it's safe to say that the spider was also caught in the blaze. While arachnophobia is not to be taken for granted or ridiculed, there are surely other ways to solve this condition than burn your own house down.

Meanwhile, Berry's neighbors said the house may have been occupied by squatters. “They keep staying in it, keep burning it up. You keep hearing rumors about drug addicts left and right," said one resident. It must have been pretty bizarre for the neighbors to witness such an arson. Berry will likely face charges for this and it is going to cost quite a bit to repair the house... all for a (possibly harmless) spider. Meanwhile, on the internet, several people were amused and frankly quite appalled at how this incident turned out.

"I have experienced spiders this year and I have been terrified, mainly in distinguishing the type of spiders we have. After much study and checking with my daughter, I do believe we have had some recluse spiders. I have purchased peppermint oil and now make it a habit to spray it at least weekly in areas where I have seen the critters. They do NOT LIKE peppermint. You put drops of oil in water in a spray bottle and spray areas well." wrote one user. "All that is needed to add to the story is the spider slowly crawling out of the burnt rubble in the middle of the night." added another. A third said: "Actually the spider followed her out of the house and watched it burn from a neighbours tree, I have that info from good source." Another user joked that: "Plot twist, spider survived by hopping onto back of firefighter and has now provoked a second arson."