Reeves proves time and time again that he's one of the nicest people in Hollywood. 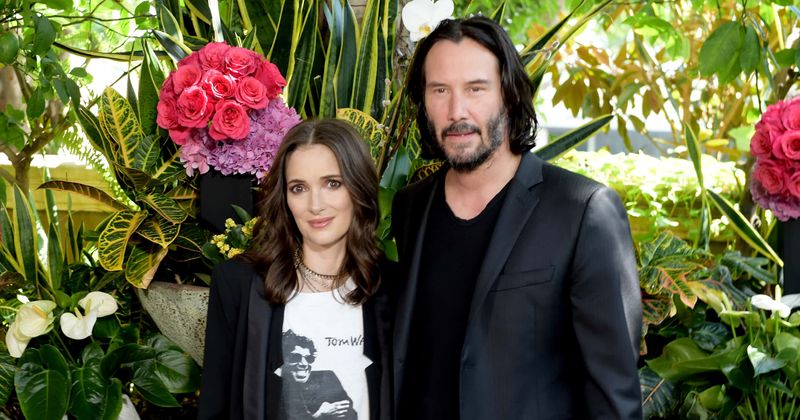 Winona Ryder and Keanu Reeves starred in Francis Ford Coppola’s Coppola’s 1992 film Dracula, an adaptation of Bram Stoker’s vampire story.  Ryder played Dracula’s main target Mina Harker, and Reeves portrayed her fiancé. Winona Ryder recently revealed the bizarre lengths director Coppola wanted the actors to go to while on the set. According to The Independent, during the filming of a scene involving Gary Oldman’s Dracula transforming into a pile of rats, the director did something out of the blue. He stood off-camera repeatedly shouting “You whore!” in order to get Ryder to believably cry. He also tried to get her male cast members to join in too. Reeves being the gentleman that he has always been, refused.

Keanu is a gentleman, we don't deserve you

“To put it in context I’m supposed to be crying,” Ryder told The Sunday Times. “Literally, Richard E Grant, Anthony Hopkins, Keanu … Francis was trying to get all of them to yell things that would make me cry. “But Keanu wouldn’t, Anthony wouldn’t … It just didn’t work. I was, like, really? It kind of did the opposite.” Although Ryder says she and Coppola are ‘good now’, the experience led to a long-term friendship with Reeves, after he refused to upset her unnecessarily. The two have acted in a number of films together since. The three include 2006’s A Scanner Darkly, 2009’s The Private Lives of Pippa Lee, and 2018’s Destination Wedding.

i think about the fact that keanu reeves and winona ryder could be married because of francis ford coppola daily and i have no regrets pic.twitter.com/c1sdQzij89

In a previous interview with The Talk, Reeves joked that Ryder calls him "husband", reports PEOPLE. Francis Ford Coppola hired “a real Romanian priest” for a wedding scene involving the pair's characters. When co-host Carrie Ann Inaba asked him if it was true, Reeves said, “That’s what Winona says.” “Once in a while, I will get a text, ‘Hello, husband,'” he shared. “I didn’t really believe her, and then Francis Ford Coppola, the director of Dracula, contacted Winona and said publicly that, yeah, that really happened, the priest did a full ceremony, and Winona and I got married.” Inaba asked, “So, it’s real?” Reeves joked, “Yeah, it’s awesome.” Ryder told EW that the two “actually got married in Dracula.” “No, I swear to God, I think we’re married in real life,” she added. “We shot the master and he did the whole thing. So I think we’re married.”

Winona Ryder and Keanu Reeves might actually be married https://t.co/NsW01h1pFw

Jokes apart, Keanu Reeves has had a rough past. We previously reported that he suffered so many tragic losses: his best friend, his girlfriend, and even his baby daughter. In 1993, his best friend River Phoenix, brother of Joaquin Phoenix, died of a drug overdose at the age of 23. His girlfriend Jennifer Syme and him were preparing for the birth of their daughter, Ava who sadly was stillborn on Christmas eve in 1999. Shortly after the couple broke up, Syme died in a car crash in 2001.

In 1998, he met Jennifer Syme at a party, and fell head over heels in love. Within a year, she was pregnant with his baby. pic.twitter.com/l9mMhWXAQS

Despite the many heartbreaks in his life, Reeves has found love again. He is happily dating 46-year-old artist Alexandra Grant. The couple met in 2009 at a dinner party. In fact, they're even working together. They have produced two books: Ode to Happiness, released in 2011, and Shadows, released in 2016. Ode to Happiness was Reeves' first step into the writing world and Grant's first artist book, reports PEOPLE. They were photographed holding hands while attending the LACMA Art + Film Gala presented by Gucci in Los Angeles in November of last year: their first official outing together.

Fans love Reeves so much that they have dubbed him as one of the nicest actors in the business. Insider has even gone on to list 13 reasons why the actor is the "greatest person ever". This list includes everything from being respectful of his fans, and frequently posing for photos and signing autographs for them to random gestures of kindness like giving up his seat on a crowded subway train to secretly donating huge sums of money to children's hospitals. More recently,  the actor geared up to be part of a 15-minute Zoom chat with a lucky winner for an initiative to raise funds for charity. The proceeds will be donated to Camp Rainbow Gold, a children’s cancer organization aimed at providing emotionally empowering experiences to kids in Idaho diagnosed with cancer reports. The call will take place in the week beginning July 6. According to the website, the event is called "A Little One-on-One with Keanu". The description reads: Bill & Ted. Speed. The Matrix. John Wick. You know him. You love him. This is truly priceless and now you have the chance to Zoom with him from home! Get your questions ready and spend 15-minutes with actor, director, producer and musician, Keanu Reeves.

The bid for the exclusive chat with the actor is set at $75,200 at the time of this publication... isn't he just the sweetest!?