trending celebrity people lifestyle news animals
Wife Returns From Shopping To Find Her Injured Husband In Bed With Her MIL, Asks If It's Wrong

Wife Returns From Shopping To Find Her Injured Husband In Bed With Her MIL, Asks If It's Wrong

The woman's husband was on bed rest for a while after meeting with an accident. 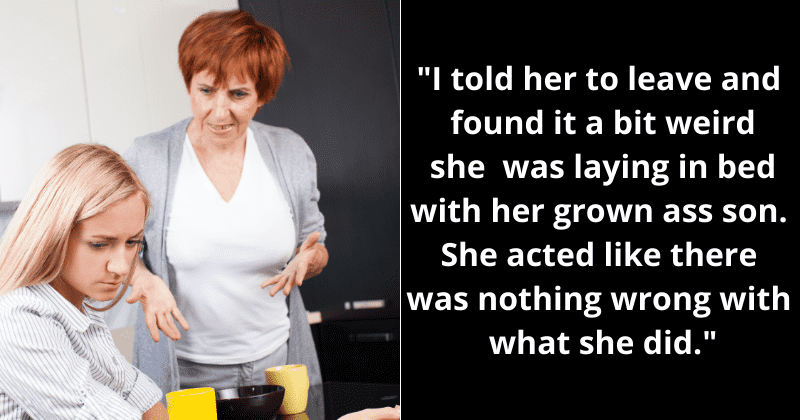 One woman was left feeling uncomfortable after walking in on her mother-in-law (MIL) in bed with her husband. It's not as bad as one may imagine but it did leave the woman feeling weirded out. According to Cafe Mom, the woman explained on Reddit that her husband first had a vasectomy and then soon after his procedure, he was in an accident. This left him with a "couple broken ribs, a head injury and a broken leg." While her husband was recovering from the car accident, he had to be on bed rest for a while. She asked her in-laws to help out but noticed MIL had started to act like her husband's "primary carer." Then it started to get a bit too much for her.

She explained: My husband sometimes is out of it so he doesn't know what's going on, on more than one occasion he has called her my name, and she doesn't bother to tell him that she is his mother.There are several times where I tell everyone to leave him to sleep or rest, but MIL doesn't listen and when I know she isn't downstairs I go up stairs to look and she is in our room, and she's woken him up and talking to him like he is a baby. He's a bit jacked up on meds so I don't think he really knows what's going on.
I've always kicked her out my room and she been getting more and more snarky with me. She also has been fighting FIL to, because they were supposed to be helping out with the kids, but only FIL does most of it.

When the woman returned from buying groceries, she walked in on something she just couldn't let go of. She wrote: Just a couple hours ago did I get home from getting the groceries and while FIL is helping out with kids MIL was nowhere to be found, so I went upstairs, our bedroom door was shut slightly, and when I pushed it open I found MIL laying in bed with my husband, I told her to leave and found it a bit weird she was laying in bed with her grown ass son (is it just me who finds this wrong?) She acted like there was nothing wrong with what she did. I told her I was literally on the verge of throwing her out, and as she heads downstairs she screams about my parenting and the wife I am. She continued to scream about me for a minute until I got sick of it and ran back downstairs, the moment my feet hit the floor her mouth shut. I told her to repeat herself but she ignored me.

The post received some mixed reactions. Some felt the wife was making a big deal out of nothing but others came to her defense saying MIL needed to respect boundaries. DollyLlamasHuman said: Please tell me you tossed her ass out of the house and she is banned from here on out. Rumbleinmybumble wrote: If hes on bed rest and hes broken it makes sense she wants to go in your room to care for him. Adult or not hes her son and she cares about him and wants to look after him. If it was a normal week yes it would be bloody weird. But its not a normal week. And he cant just get up and go sit on the couch with her to have a chat or watch TV or whatever.  PrettyLilPeacock pointed out: Your bedroom is YOUR area. That should be a CONCRETE boundary. Nobody but you and hubby go in there, especially uninvited, and ABSOLUTELY ABSOLUTELY nobody but you and hubby lie on your bed. Set the boundary clearly to MIL-in front of FIL. Tell her if you find her in your room again, she will be told to leave. If you ever find her in your bed again, she will never be welcome back. Be firm, be clear, and don't accept any back talk about it.