The newlyweds decided that they would contribute equally to all their expenses which were why the woman assumed they would be paying for their own meals as well. 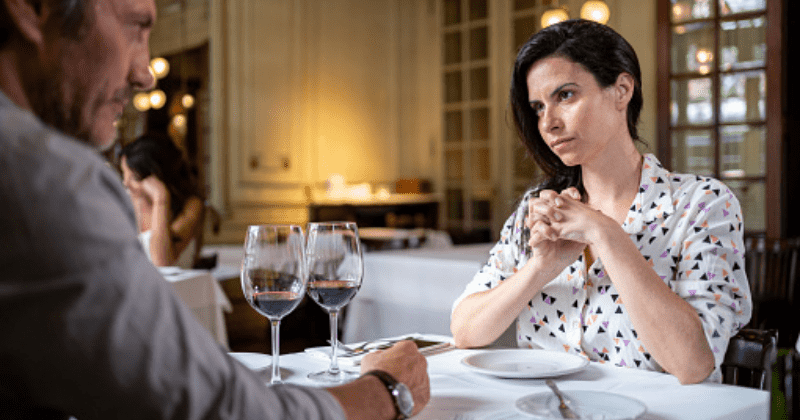 We have come a long way in the fight for equality between men and women. But are far from done. Women have broken out of the restricted private spheres of household work to become financially independent. Picking up the check at restaurants had become a much-debated topic about equality as espoused by feminism. Why were only men were expected to pick up the check? True equality is when paid too, right? Thankfully, the days when men were the only ones financially capable of picking up checks are gone. The issues have evolved now and taken on a more complex form.

A woman took to Reddit's AITA forum to ask if she was a jerk for not paying for her husband's meal at a restaurant. The 30-year-old woman who works as a secretary has been married to her 32-year-old husband who is a police officer for four months. She explained that her husband likes to be independent in all aspects, especially when it comes to money. But there's a problem. "He's bad with money meaning he never plans for tomorrow and enjoys buying new things every day," she wrote. When she approached him about getting a joint account, her husband surprisingly agreed. Soon, his salary doubled and so did his spending.

"It was just like grab the money and go spend it," she said. "Not okay because we have commitments." He would not even run his expensive spending by her. When she decided to discuss his careless spending habits with him he told her that since it was his money that he was spending, he did not have to tell her how he spent it. He then admitted that having a joint account was unnecessary and was probably a bad idea. He told her, "Am I crazy to think that everyone should just be able to have their own money to spend regardless of whether they were married or not?" So the newlyweds decided that they would equally contribute to all their expenses. The husband agreed as long as he could do whatever he wanted with his money.

The couple went out to a restaurant one night where the woman assumed they would be paying for their own meals, according to their financial agreement. So at the end of the meal, she naturally asked the waitress to separate their bills. Her husband was confused when she heard her request and said, "You're not gonna pay for my meal too?" She reminded him about their agreement and told him this is what separate finances meant. He got upset when she said this and told her that he had spent all the money he had before coming to the restaurant. He did not think she would refuse to pay for him. He argued with her and threw a fit. She then just paid her half and was leaving, when he called her selfish and mean.

Setting aside the fact that you didn’t talk about how to handle your finances before getting married, girl, you gotta... pic.twitter.com/XywZUgnop7

"He came home 2 hours later telling me his buddy came and paid for his meal no problem," she continued. "He said I shouldn't have declined to pay for his meal and was being mean to him. I told him to not take his misplaced anger out on me but he still argued with me about what I did and how unacceptable it was." She took time to calm down and the following morning spoke to her husband about seeking out therapy and he retorted by saying, "Okay, But who's paying?" He then brought up the dinner bill again and wanted her to apologize to him.

While it has been declared that she is not the A-hole, Redditors are concerned about their marriage. One user wrote: NTA but jeez, how did it get to this point? What was the financial discussion like before marriage? I mean, if this isn't resolved somehow the marriage will fall apart. Quirky_Bumblebee_461 stated: NTA. But money issues cause about 40% of divorces. Good luck. Others were of the opinion that both parties in this situation sucked. WebbieVanderquack said, Firstly, you should have discussed this before you got married. Secondly, if you're already arguing over the cost of a meal 4 months in, you have problems that need solving pretty urgently. I was with you until you left him at the restaurant with no means to pay. That was a really petty way to win an argument, and it puts you both in the AH basket. 4 months ago you people vowed to love each other, and you need to do it.

Girl, why did you marry this man? Did they not discuss all this before they got married, cause she knew this about him. pic.twitter.com/wGGZSIwqv7