Before the plane crashed, Brian Sweeney left his wife a heartfelt voice note that she cherishes every day. 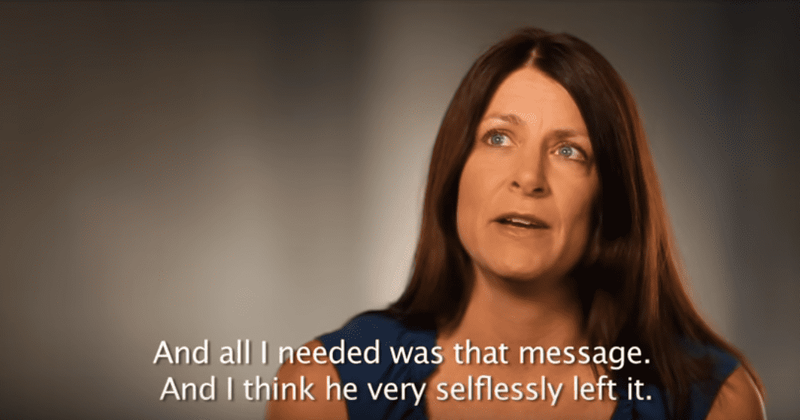 18 years ago today, the hijacked United Airlines Flight 175 crashed into the South Tower of the World Trade Center. Every year after, we remember the victims of those attacks. Among them was Brian Sweeney, a passenger on the plane whose voice message to his wife was made public a year after the attack. The message is one of the most powerful artifacts left to us from that day, and has a place of honor in the National September 11 Memorial & Museum, which dedicated an installation around the recording so that visitors could listen to it using a telephone. Sweeney, a 38-year-old former U.S. Navy pilot from Massachusetts, was a passenger on United Airlines Flight 175, and he left the message for his wife, Julie Sweeney Roth, three and a half minutes before the plane struck the South Tower of the World Trade Center.

"We assume he was calling from the back of the plane, because he said, 'They might come back here. I might have to go. We are going to try to do something about this,' " Julie told CNN in 2004. "Whether he was doing something or whether [the hijackers] were coming back, I don't know that...It was more speculative than fact as far as why he hung up the phone quickly — whether it's because they were charging the cockpit, or whether they were coming back to where he was and he didn't want to be seen on a phone." Sweeney's message had a cool and collected demeanor even as passengers in the plane were unsure about their fate. "Hey Jules, this is Brian," Sweeney said. "I'm on an airplane that has been hijacked...if things don't go well, and they're not looking good, I want you to know that I absolutely love you. I want you to do good, have good times, same with my parents. I'll see you when you get here. I want you to know that I totally love you. Bye, babe, hope I will call you." Sweeney also called his mother, Louise, while on the plane, and she preferred to keep his message to herself. Flight 175 was hijacked on September 11, 2001, while en route from Boston to Los Angeles with 56 passengers on board. There were no survivors after the plane crashed into the South Tower.

Your breath is checked, for a second, reading this. pic.twitter.com/jSgt335PoS

For Julie, the message remains a lasting gift for her to remember her late husband by. “I was lucky Brian called and spoke to me on that message,” she told PEOPLE. “He told me what he believed and I grasped onto that with all I had, and I’ve embraced life — I am living it as I know he would want me to do.” The grieving wife decided to make Sweeney's message public in 2002 in the hope that it would comfort others who had lost loved ones on that flight. “The priority to him in those moments was to let his loved ones know that he loved us and that it was okay to move forward and do what we needed to do,” Julie, who now lives in New Jersey, said. “Though he believed he would see us again, he wanted us to know it was all going to be okay no matter how it turned out.” She added, “There are still times when I cry and I listen to his message,” she says. “It’s still a part of me and there’s probably still a lot of healing I have to do.”

That Brian Sweeney voicemail is amazing, in terms of its grace, courage & selflessness. I am in awe #911Anniversary

Almost 3000 people died as a result of the attacks, in New York City, Washington D.C. and outside of Shanksville, Pennsylvania. Since then, at least 1000 more people are reported to have died from illnesses related to the debris and dust caused by the attacks. Julie is now remarried, and for nearly a decade, has volunteered at the 9/11 Tribute Museum, a family-run center that highlights the stories of victims and survivors of the attacks. She says her work there and the people she's met through the center has helped her grieve. “Moving forward does not mean you have forgotten your past. I don’t use the word closure, I don’t believe in it, people throw it out there all the time. You don’t ever close the door to something like this,” she told PEOPLE. “It’s one day at a time. That’s all this life is, one second at a time.”