The two have been happily unmarried for 37 years 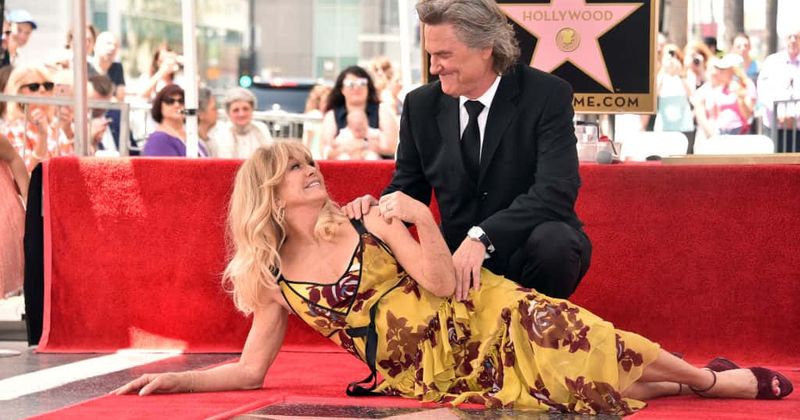 Kurt Russell and Goldie Hawn are honestly #couplegoals. We love how their relationship isn't based on labels but things that really matter in long-lasting companionship. Hawn is 75 years old and Russell is 69, and the two have been "happily unmarried" for 37 years. Time hasn't stopped them from being a playful, flirty, sexy couple who still look at each other with adoring eyes and big hearts. They first began dating while filming for the 1983 flick Swing Shift, and neither of them has looked back since. In a recent interview with PEOPLE, they insist there's no big secret to their lasting love. Hawn said, "You’ve just got to want to be together. I don’t think there’s any way other than do it." Russell recalls being vividly impressed with Hawn's look. "The images of her were alluring and attractive, so all those things were taking place," he said, adding, "But then you get to know somebody and you begin to find that, yeah, you do share things in common deeply. Hey, listen, it goes where it goes."

As for seeing the couple on-screen, fans are finally getting the chance to watch the gorgeous pair as Mr. And Mrs. Santa Claus in the Netflix film, The Christmas Chronicles 2. The pair haven't acted together since 1987's Overboard, but their chemistry is just as sizzling as it was back in the day. "I was excited about playing her," the actress shared of her latest role. "She hadn't been really defined yet really as a character. She's always been in the background, making cookies. And now it's a new world, right? And they gave Mrs. Claus magic, and Kurt was a big part of that as well, of designing the character."

The Christmas Chronicles Part 2 gave me all the lovely Christmas feels I wanted this year. Such a big, beautiful, fun Christmas movie. Kurt Russell is in magical form yet again. And Goldie Hawn is adorable as always, she's made to play Mrs. Claus. Wonderful movie! 😍🎅🤶🎄 pic.twitter.com/xobQGxWerD

The pair also share a beautifully blended family despite not being wedded. Over 37 years, they have raised their son, actor Wyatt Russell, 34, as well as their children from previous marriages: Russell’s son Boston and Hawn’s kids, actors Kate, 41, and Oliver Hudson, 44, who fondly refer Russell as "Pa." "For people like us, the marriage certificate wasn’t going to create anything that otherwise we wouldn’t have," said Russell. "I don’t know. 40 years isn’t enough to finally say, 'Well I guess...'"

Hawn added, "Well, we’re not at 40 years yet. Our children got married. I mean, they didn’t not get married. Oliver’s very happily married and Wyatt’s very happily married. Katie got married once and that didn’t work, and she’s with this most amazing human and I don’t know if she’ll marry again. The point is that we all tried marriage and sometimes marriage doesn’t work." And that's fine with the pair. "It’s okay. It’s not about the marriage. It’s about the people and the relationship, and the will to stay together," Hawn said. "And that’s a big one because if you want it, you can have it. You’ve got to give things up, but the joy and the excitement of being together and touching the toes of somebody at night is really a nice feeling."

The two also recently appeared on The Ellen DeGeneres Show where it was oh-so-obvious: the pair still seem like a couple who's just in the flirty fun days of initial dating. Hawn told DeGeneres that working with Russell on Netflix's The Christmas Chronicles 2  felt "just like a honeymoon." The 75-year-old elaborated, "We'd go out and have dinner and we were just together and it was intimate—it was just the two of us. I just thought it was the most fun time ever. It felt like our honeymoon."

When asked by DeGeneres when Hawn fell for Russell, she replied, "I loved the way he looked at my children. It was really something special." The Private Benjamin and First Wives Club star added, "I fell in 'love' but I also fell in 'like' and those are two pretty big deals." We love how they still make an effort to do fun things together. They've been together a whopping 37 years, so we're pretty sure we know what they're talking about.

Love needs no labels, and marriage necessarily isn't for everyone. If we ever find true love, this is the kind we can only dream of!