'Girls Just Want To Have Fun' Is The Best Movie You've Never Seen, Here's Why

The 1985 film became a template for future dance movies and rightfully so. 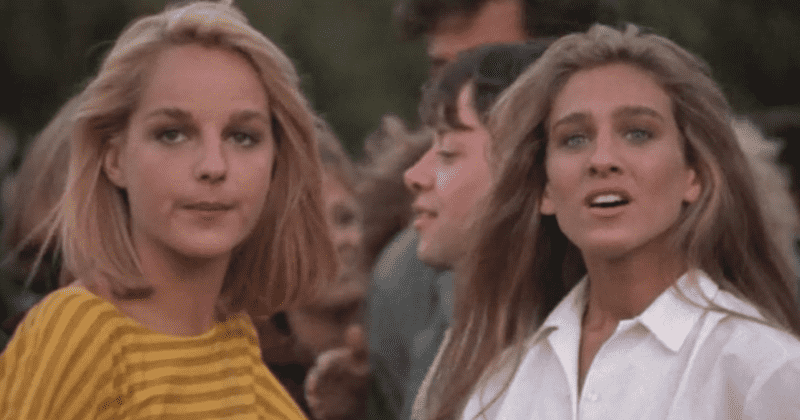 Not many of you may know but the 1985 film Girls Just Want to Have Fun set the template for all future movies in the dance genre. Think about it, a girl who pines to dance, teams up with a hot bad boy dancer, and proves to rivals and disappointed family members that talent and passion can overcome anything. Sounds familiar right? Think about dance films, like Dirty Dancing to Step Up, Stomp the Yard to You Got Served. According to Vulture, Girls Just Want to Have Fun is one film that doesn't get enough credit for being the "linchpin of dance movies." The story revolves around a military brat, played by Sarah Jessica Parker who, along with the help of her sassy best friend (Helen Hunt) and love interest/dance partner (Lee Montgomery), strives to be on Dance TV, the best dance show in the country. Janey's father doesn't approve but she is determined to work hard to pursue her passion for dance. The media outlet picks out many themes and tropes in the film that seemed to have influenced future dance films. There's everything from a sheltered, dance-besotted protagonist, to the sassy, supportive BFF to the bad boy love interest and dance partner. And of course, tons of dance montages to make a great film.

You can catch the 80s film on Amazon Prime Video where many fans have left positive reviews for the film. SciFiChikie wrote: This was a childhood favorite of mine I still know almost all the lines. I put it on to watch, while my daughter (5 years old) was on her iPad. She has now demanded I put on ‘Girls wanna dance!’ 4 times in the last 3 days. I absolutely love being able to share this 80’s classic with her. as_an_oddity praised the 80s vibe of the film, stating: Do you sometimes just want to watch some total cheese you can laugh at? Do you love the hair, make-up and workout outfits of the 80's? Then this movie is for you! Gather your friends, your microbrews and your ironic facial hair, sit back and enjoy! There really isn't a single scene that disappoints. If you are looking for a substantial coming of age movie with a compelling story line and enduring themes, keep on trucking, but If you have a sense of hilarious irony and some time on your hands, this movie is pure 80's gold! LMJ added: I'm a big fan of '80's movies and this is one of them. It's a fun, light hearted dance movie about a young girl (Sarah Jessica Parker) who goes to a convent school - with a strict military father - who applies to a competition to appear on 'Dance TV' and is partnered with the cool high school boy. There's dancing, romance, laughs and some mayhem from a rival dancer. Helen Hunt is her usual brilliant and feisty self.

“Girls Just Want to Have Fun” has everything:

There's clearly a bunch of reasons to rewatch the film. And if you still haven't watched it give it a go! Revisit the 80s in its full, sparkly glory. There are some crazy fashion statements in there. There's also a teenage Sarah Jessica Parker as well as a rebellious Helen Hunt where in one scene she's even wearing dinosaurs on her head. There's also a young, barely a teen Shannen Doherty! And as PEOPLE put it, it's a great film about female friendship and has one of the most triumphant dance finales in any ’80s movie ever. One interesting, but subtle point picked up was that "in virtually any other movie in which a young man has dreams of dancing, his blue-collar dad would probably be slow to accept his son’s desire. In this movie, that doesn’t happen. Jeff’s dad is on board. It’s Janey’s dad who is resistant." Also as a protagonist, Janey is pretty strong: she knows what she wants and she’s ready to work hard to get it...  So there you have it: there's fun, fashion, friends and dance! This film definitely deserves to be watched again, don't you think so?