The Black woman noted down the white woman's license plate and reported her to the police but she was let go. 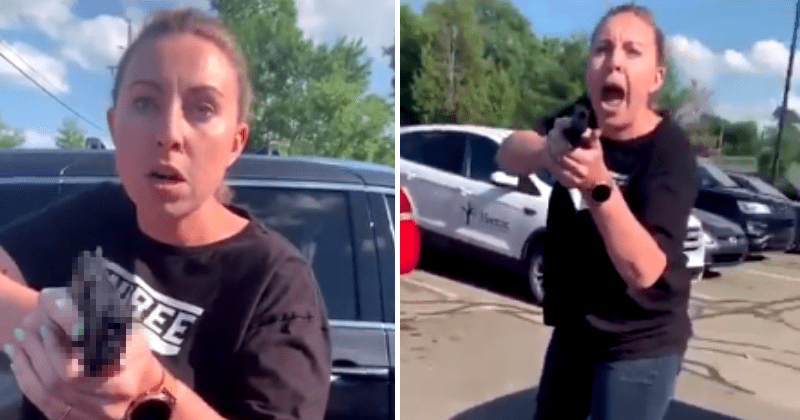 Trigger warning: The story has videos and details of race-motivated violence that people may find disturbing

Update!!!!! They were let go !!! The police just took the guns away !!! Ridiculous!!!! They said they couldn’t arrest her because my niece mother hit there car (with her hand ) to stop them from hitting my niece!!! Justice needs to be served! This is white privilege 🤦🏽‍♀️

This comes just after a white couple was seen brandishing firearms at Black Lives Matters protesters outside their home. The video from the incident in Missouri city went viral on the internet. Mark McCloskey and his partner, Patricia McCloskey, could be seen threatening protesters who were passing by, by pointing the firearms at them threateningly. Mark McCloskey was holding a semi-automatic rifle while Patricia McCloskey was pointing a handgun at the crowd.

A couple pointed guns at protesters in St. Louis as a group marched toward the mayor's home to demand her resignation. https://t.co/5EqDd43QCd pic.twitter.com/KWNaif77ch

A St. Louis prosecutor announced that an investigation was being launched into the matter. "I am alarmed at the events that occurred over the weekend, where peaceful protesters were met by guns and a violent assault," said Circuit Attorney Kimberly Gardner.  "We must protect the right to peacefully protest, and any attempt to chill it through intimidation or threat of deadly force will not be tolerated," added Kimberly. President Donald Trump had also shared the video on his Twitter timeline. The McCloskeys' attorney, Albert Watkins, claimed there was no ground to charge his clients. "Any suggestion that my clients acted unlawfully is one which would demonstrate unequivocally the wholesale absence of appreciation for longstanding law in the state of Missouri," he said, according to USA Today. He claimed his clients' actions were "born of abject fear of imminent harm."

"They are appalled that they have been portrayed in a fashion which they believe is going to be used by some to support the position that its time to grab the Confederate flag and grab a gun and protect ourselves against the BLM movement," said Watkins. "My clients know that they looked like lunatics."

The couple also claimed that their gate was destroyed and said they feared for their lives. "It was like the storming of the Bastille, the gate came down and a large crowd of angry, aggressive people poured through," said Mark McCloskey, reported CBS News. "I was terrified that we'd be murdered within seconds. Our house would be burned down, our pets would be killed." He referred to the peaceful march as a mob, having been caught on video brandishing weapons at them. "A mob of at least 100 smashed through the historic wrought iron gates of Portland Place, destroying them, rushed towards my home where my family was having dinner outside and put us in fear for our lives," said Mark McCloskey.