Richard Demsick posted a video of him carrying the TV to prove point that Ahmaud Arbery's murder was connected to the color of his skin. 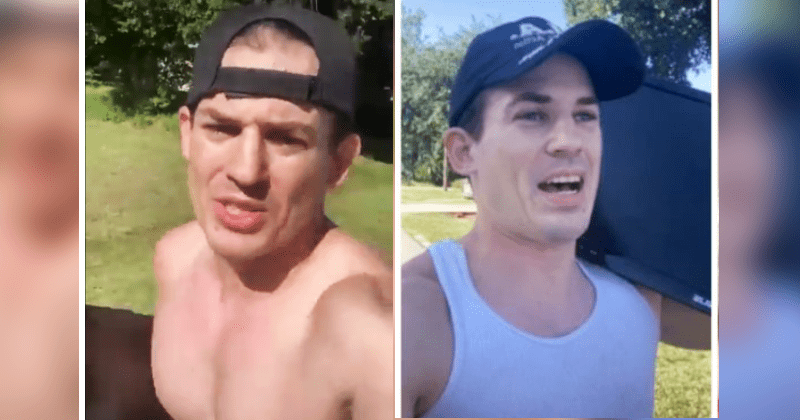 Ahmaud Arbery was shot dead in broad daylight by two white men, who defended themselves claiming they thought he was a burglary suspect. To highlight racism played an integral part in the murder of Arbery, Richard Demsick, a white man ran 2.23 miles while holding a flat-screen TV to show “that being a suspicious character isn't enough that someone should be shot down.” As expected, the white man was neither shot down nor confronted, but instead received waves from white people along the way. Many people had run 2.23 miles, symbolic of Arbery's death day, February 23, on Friday to honor his memory, reported The Hill.

##irunwithmaud part two! Really thought I figured it out guys but made it home safe after my 2.23 mile run 🤷🏻‍♂️ ##runwithmaud ##runwithahmaud ##fyp

The video showed a shirtless Richard Demsick running with a television in his hand through a neighborhood in Florida. “All right, I’ve figured it out,” Demsick can be heard saying in the clip. “I got my hat on backwards, I’m shirtless, like I’m on some episode of Cops, I’m running with a TV., someone’s going to stop me now for sure, ‘cause, if not, what was the problem with Ahmaud?” However, no one stops Demsick, let alone shoot him, and he reaches back safe. I really thought I figured it out guys but made it home safe after my 2.23-mile run. The video posted on TikTok garnered more than a million views as it shed light on an obvious problem. Demsick is a 34-year-old former pastor living in Vero Beach, Florida.

This man jogged 2 miles through his neighborhood carrying a TV in his hands to prove that “looking like a suspect” who committed a robbery isn’t a good enough excuse for the murder of Ahmaud Arbery.

Neighbors waived hello to him as he jogged...pic.twitter.com/lxYfGpd8pD

Arbery was fatally shot by Gregory McMichael, 64, and his son, Travis McMichael, 34, in February while he was out for a jog. Gregory McMichael was also a former police officer. The case made no progress until video footage emerged of the father-son duo shooting the 25-year-old. Authorities were left with no choice but to arrest the two white men after outrage from the public and lawmakers. The two white men were charged with murder and aggravated assault. The Justice Department is now considering if it should hate crime charges to the pair. The duo had claimed that they thought he was a burglary suspect.

Demsick was shocked by the incident. “I just started crying when I just saw this poor young man running — as I have thousands of times in my life — get shot down,” said Demsick. He wanted to do something to register his outrage at the incident and wanted to highlight why Arbery was shot only because he was black. “Being a white person, that's just not going to happen to me,” said Demsick. He said the response to his video has been overwhelming. “People have been incredibly kind, undeservedly kind," said Demsick, before adding that there were people out there fighting to rectify racial bias at institutional levels. "There are people who are daily working trying to correct the injustice. I just made a video," said Demsick.

We’re literally hunted EVERYDAY/EVERYTIME we step foot outside the comfort of our homes! Can’t even go for a damn jog man! Like WTF man are you kidding me?!?!?!?!?!? No man fr ARE YOU KIDDING ME!!!!! I’m sorry Ahmaud(Rest In Paradise) and my prayers and blessings sent to the..... pic.twitter.com/r1PNxs8Vgn

He added that he wanted to create more content to highlight the racial double standards in America. He had also made a follow-up video on Mother's Day where he asked his mom if she'd be worried for him if he went running with a television on the streets of Florida. "No, of course not," she said. "Huh, I wonder why that is," he responded.

The Democratic mayor of Atlanta, Keisha Bottoms called the death of Ahmaud Arbery a lynching and a hate crime. “Had we not seen that video I don’t think they would have been charged. It’s 2020 and this was a lynching of an African American man,” said the mayor, reported The Guardian. She also slammed Trump for his backing white supremacists and promoting hateful rhetoric.  “With the rhetoric we hearing coming out of the White House in so many ways, I think that many who are prone to being racist are given permission to do it in an overt way we otherwise would not see in 2020,” said Keisha Bottoms. “We don’t have that leadership at the top right now. It’s disheartening.”

If you’ve ever wondered what white privilege looks like: props to Richard Demsick for providing the world with Exhibit A #JusticeForAhmaud pic.twitter.com/xCqJ6WFrKL

Ahmaud Arbery was fatally shot in broad daylight and it's a miscarriage of justice that it took so long to make arrests.

I'm demanding the Department of Justice launch an independent investigation into this case.