Gayla Thompson was in labor for two whole days when she gave birth to her son while parked on the side of the interstate. 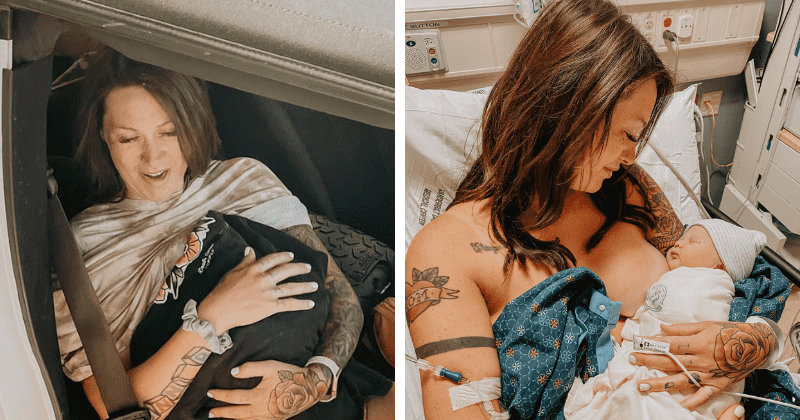 Who doesn't love a great birth story?  Nashville, Tennessee mom Gayla Thompson gave birth to her second child recently and it was quite an experience unlike her first delivery. Thompson and husband Ryan, who is a UPS Driver who literally delivers packages, didn't even make it to the hospital in time because the arrival of their second baby took place unexpectedly. Gayla didn't make it in time to the hospital and ended up giving birth to her baby boy right in the front seat of their Jeep Wrangler — while parked on the side of the interstate!

Three days before she gave birth on June 16, the photographer wrapped up a shoot and wasn't feeling too great at the time. She was nine months pregnant but wasn't going to give birth for another week so she decided to let it ride out. She was experiencing contractions but she said that she " figured it was just Braxton Hicks contractions [false labor pains]," Thompson told CafeMom, "due to my body hurting from photographing that long day in the heat." "The pain made me want to get checked out that night," she continued, "but because children under 12 aren’t allowed in the hospital, we didn’t want to find a babysitter late at night and waste precious sleep time just to be wrong and come back home." So she decided to stay put all night. When she woke up  the contractions started picking right back up where they left off.

Soon enough the couple decided to get to the hospital in their  Jeep Wrangler and dropped off their son Connor at day care first. Despite her pain getting more intense by the minute her husband was still not convinced the baby was ready to come."My husband 100 percent didn’t believe I was in real labor at all!" Thompson said with a laugh. "The contractions happened so suddenly and got so bad so quickly, that he truly believed they weren’t real." But they were. "The moment I realized he was actually coming out was when I couldn’t scream from the pain anymore, and was just dead silent," she shared. "My body told me it was time right then!" In a few seconds Thompson's water broke on the front seat.

She elaborated in a Facebook post, saying: That was the sign that told me baby is on the way, and we won’t make it! Gave Ryan the option to get the hell there and speed up, or call 911. Which he refused to do because he was still convinced it was false labor. He finally called when Carson’s head crowned. Carson was born at 8:56am on the side of interstate I-440! His head was stuck for 2 solid minutes between contractions/pushing. Ryan pulled him out on next push, and held him while I ripped my top off for skin-to-skin. He grabbed some shirts from the back to cover him while we waited for paramedics. It was the quickest and longest 10 minutes to wait for them!! They took me and baby to Vanderbilt, as Ryan followed. I delivered my placenta at hospital (which was WAY more painful than the natural Jeep birth). Lost a ton of blood that prevented me yet again from getting any drugs!! But all is well and baby is totally healthy!! My poor Jeep lol

The mom's birth story of her "road baby"  has since spread like wildfire. "It has been absolutely amazing watching this go viral," Thompson told CafeMom. "It truly is such a feel-good story, it definitely deserves to be shared with the world!" While her baby is doing well, the same can't be said about the Jeep which she candidly shared " smells straight up raw fish that was left out in the heat and not refrigerated." But fortunately they were able to get the car all cleaned up! With Gayla sharing an update that said: Finally clean, but seriously can’t wait to have a passenger seat back!