"We All Do Stupid Things At 17," Don Jr Says About Kenosha Shooter Allegedly Killing Two People

He made these controversial comments in an interview for the "Extra". 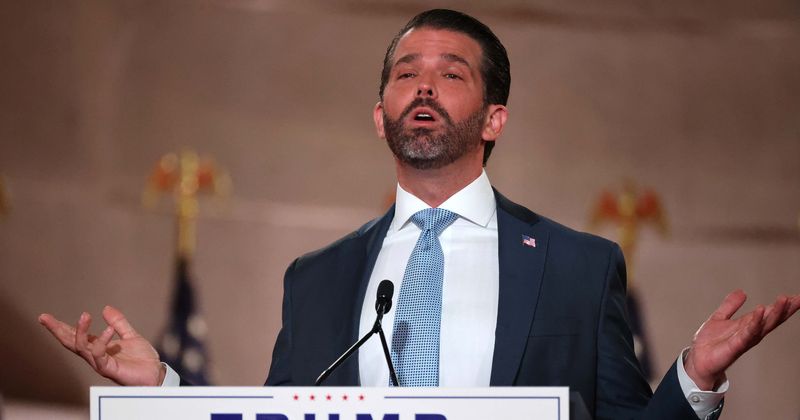 Yet again, Donald Trump Jr has put his foot in his mouth. This time it's when he was asked about Kyle Rittenhouse, the teen who has been charged with homicide in the shooting of two protesters and injuring a third. During an interview with Extra, he described Rittenhouse's actions as "stupid" but far from condemning him, he minimized it by saying "we all do stupid things 17", reports the Milwaukee Journal Sentinel. Former Bachelorette star, Rachel Lindsay asked Don Jr why his father had not yet condemned Rittenhouse to which the son replied that he "was waiting for due process" before coming to a conclusion, even though there is clear video evidence of the shooting. "If I put myself in Kyle Rittenhouse's shoes, maybe I shouldn't have been there. He's a young kid. I don't want 17-year-olds running around the street with AR-15s," Don Jr said.

Some ppl do stupid things at the age of 17, not ppl who were taught morals, scruples, common sense, and right from wrong, his father was raised by racist neglectful parents, he’s been taught well by daddy Trump how to be his daddy’s son, stupid and immoral https://t.co/6db8z1moTY

He added, "Maybe I wouldn't have put myself in that situation, who knows." And then, he said one of the most shocking things of all: "But, we all do stupid things at 17." Visibly perturbed that Don Jr thought murders are something teenagers do at that age, Lindsay called him out and pressed him saying "I think it's a little bit beyond stupid." Don replied, "Really stupid, fine. But we all have to let that process play out and let due process take its course."

"I mean who here didn't get a little rambunctious as a teen and just galavant across state lines with our rifles, murdered a few people and have a cool drink of water with some friendly cops? Amirite?"#DonJr #Kenosha #BlackLivesMatter https://t.co/kTJrLz3EJE

Obviously, the internet was appalled at the insensitivity. However, knowing him and his father, it really is not a surprise.  Twitter handle Molly@serviceandcivi1 reacted sarcastically to the comments as did many other people.

She wrote:  Yeah I remember that time, while in the midst of vigilante LARP'ing, I had my mom drive me across state lines where I borrowed an AR-15 and patrolled the streets of a town and ended up shooting 3 and killing 2. Ah, youth. Another handle OceanGirl@Salacia_sea wrote on the same vein: Yeah I never took a firearm I couldn't legally own across state lines, act like I was the law, and killed two people and shot a 3rd, but ya know that's me. Others like JeezOPete@doodledeedub theorized that Don Jr has not gotten enough attention from his father as a kid and was therefore constantly craving for it. She wrote: Don Jr. will say anything to win love from a narcissistic dad who's incapable of giving it to him. At the time of this interview, Junior was 12 and Trump hadn't spoken to him for 3 months! That damages a child. What an awful father.

Then there were those who wanted to know how Don Jr's teen years were like. Stellaa (Democrats United)@stellaaaa wrote: I am curious what his daddy covered up when he was 17 I don't think as a rule we all do stupid things at 17. Another handle Augie Ray@augieray wrote: When a young person of color commits a crime, we put blame on the person, their community, their faith. When a young white person of color murders two, "We all do stupid things at 17.”

Don Jr hasn't been the only one to comment on Rittenhouse. We had previously reported that the President believed that the 17-year-old was acting in self-defense. “He was trying to get away from them, I guess ... and he fell,” claimed Donald Trump while referring to videos that showed the attack. “And then they very violently attacked him.”

On August 25, Rittenhouse traveled from Antioch to Kenosha. According to his defense team, a local business owner connected with Rittenhouse on the morning of the shooting about cleaning a graffiti and defending his property in case protests against the shooting of Jacob Blake turn violent reports Journal Times

My stupid thing at 17? Smoked pot & got drunk on Boone’s Farm. Not kill someone. Not take my gun into a situation, knowing I was looking for trouble. There is no excuse for Rittenhouse or @DonaldJTrumpJr

They also said the weapon used by the teen was not carried across state lines but given by his friend who is a Wisconsin resident. The defense team is fighting a case for the teen and arguing that he shot the two people in self-defense.