A hilarious video doing the rounds of social media shows a discontented pit bull who has a fun coping mechanism during nail clipping time. 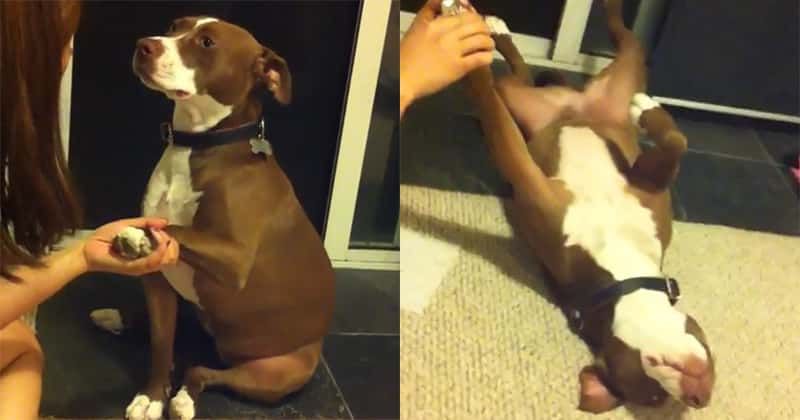 If you've ever tried to clip your dog's nails, you know it's not the easiest of tasks. And not all dogs will sit docile and let you do it, as the "world's most dramatic pit bull" exemplifies. A pit bull is gaining a fan following on social media after Twitter user @Rashona posted footage of the dog dramatically pretending to faint while having its nails clipped. As his mom first lures it with nose rubs and then picks up its paw and approaches with nail clippers, the dog first looks extremely horrified and then plops to the ground on its back.

The Academy Award for best dramatic performance goes to… pic.twitter.com/ErlQc2JcpQ

The clip was shared on Twitter last week and since then has racked up millions of likes and over a million retweets. The video was also shared to Reddit, where users commented on the dog's flair for drama. "My dog “dies” when I go to brush his teeth. He will let me do it, but I literally have to hold his head the whole time," one Redditor wrote. Others also shared anecdotes about their dramatic pets, who seem to really detest being groomed. "My dog spraypoops anyone who tries to cut her nails," another commented, leaving others to wonder just how this dog ever gets its nails clipped at all. "I have a Rhodesian, when I cut her nails (which are more reminiscent of dinosaur talons) she acts as if I am removing her liver through her nose. She howls, jumps, pulls and needs to be held down. After we are finished she licks her feet for the rest of the night while giving us all serious side eye," wrote another. On Twitter, some shared evidence of their uncooperative pets. Such drama! Such struggle!

Our beagle has to be restrained and howls like he’s been shot before we even touch him. 🙄 pic.twitter.com/kSeazmYjC5

Been there. My Sophie was a drama queen of extraordinary vocal abilities. As soon as she saw the clippers she would start.

My Pittie hates it so much (major drama, like we're killing her) that she has to go to the Vet and basically be strapped down and held by two people.
But then she bounces off the table like she was an angel and smiles with an "are we going to the park now?" look on her face. smh

There is no actor/actress who can rival this puppy. pic.twitter.com/eKQCLVACTo

Experts recommend using scissor-style clippers to cut your dogs nails, and handling the pupper's feet frequently to get them used to the sensation. You can also use a nail grinder to smooth out the rough nails. Give your dog a little treat as incentive, and hopefully, the process won't have to be a battle every single time.