The President looked a mess after the debacle that was his Tulsa rally, where only 6,200 people turned up to hear Trump speak. 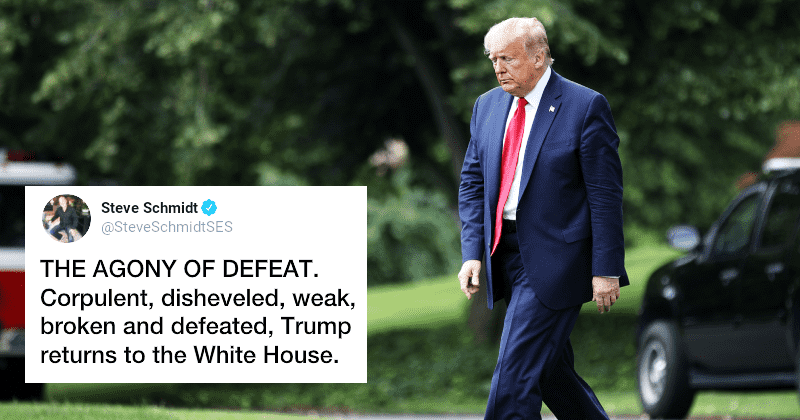 Donald Trump looked all but defeated as he took what social has dubbed the "walk of shame" following his underwhelming rally at Tulsa, Oklahoma. The President looked disheveled, with his tie undone — very unlike of him — as he walked from his helicopter, the Marine One, to the White House after landing from Oklahoma. He wore a tired face as he mustered up the energy to wave to the waiting photographers. It didn't make for a good picture, with five months left for the Presidential elections. Twitter users noted the defeated expression with many even adding somber music the video clip. One Twitter user commented: I have never seen a president walk into the White House with their tie undone clearly heavily medicated and defeated. Another user wrote: This may be the first time I’ve seen him express genuine emotion.

This is the look of defeat.
This is the true #WalkofShame.
This is glorious to see. pic.twitter.com/J8SHhzp3O3

Donald Trump's campaign boasted of more than 1 million registrations for the Tulsa rally and expected at least 100,000 people to turn up. President Trump was left shocked and embarrassed after just 6,200 people turned up at his post lockdown rally, according to the Tulsa fire department, reported CNN. The 19,000 seater venue looked largely empty as Trump addressed the meager crowd. K-pop fans and TikTok users claimed victory for ruining Trump's grand designs for a massive rally at Tulsa.

This song has so many uses pic.twitter.com/PkfG80CaYL

The Trump campaign promoted free registration online, following which K-pop fans and TikTok organized efforts to register for the rally, while having no intention to turn up. One user posted a video on TikTok asking followers to "reserve tickets now and leave him standing alone there on the stage." A source close to the Trump campaign said "Jared and Ivanka are pissed at Brad over-promising on crowd size," reported CNN. However, Jared Kushner's representative dismissed the claims as false.

Disheveled, defeated, humiliated. His pathetic dog and pony show of racism, xenophobia, corruption and lies is getting old; he was undermined, outclassed and embarrassed by teenagers across the nation who coordinated mass purchases of tickets. Bad night for him and his cult!

The President's defeated walk that went viral on Twitter summed up his day. One user wrote: This is the look of a defeated and shamed man. He would not have wanted to be on that flight home. #TrumpIsALaughingStock. Jack Brown, referencing the President's campaign being outdone by TikTok users and K-pop fans, wrote: Hat off, tie untied, disheveled, defeated — and outsmarted by GenZ, Trump returns from his colossal crowd of 6,611 in Tulsa. Mark Knoller, the CBS White House correspondent tweeted: Just after 1 AM, his tie undone, President Trump steps off Marine One back at the White House from his rally in Tulsa. By my count, it was his 500th flight aboard Marine One as president.

Trump campaign spokesperson Tim Murtaugh said, "Protesters interfered with supporters, even blocking access to metal detectors, which prevented people from entering the rally. Radical protesters, coupled with a relentless onslaught from the media, attempted to frighten off the president's supporters." Trump was furious with the size of the crowd, reported The Guardian. Trump was said to be angry with Parscale for the debacle. Parscale blamed "a week’s worth of the fake news media warning people away from the rally because of Coronavirus and protesters.”

This shot needed some scoring. I couldn't help myself. pic.twitter.com/dApSbLtuBP

Last week, a Gallup poll, revealed that a majority of Americans disapproved of Donald Trump's performance as President. Over 55% of Americans disapproved of his performance as President while 39%, a majority of them Republicans, approved of his performance. Trump has been besieged by an array of issues, including the Coronavirus pandemic, the Black Lives Matter protests, and the crash of the economy with him playing a role in aggravating each of those crises. Trump downplayed the pandemic and didn't help contain the spread of the virus by pushing for economies to open. He also targeted Black Lives Matter, using the police force and the US military to quell the protests, that were sparked by the killing of George Floyd.

This one is my favorite so far. pic.twitter.com/GfoZGkn7pY