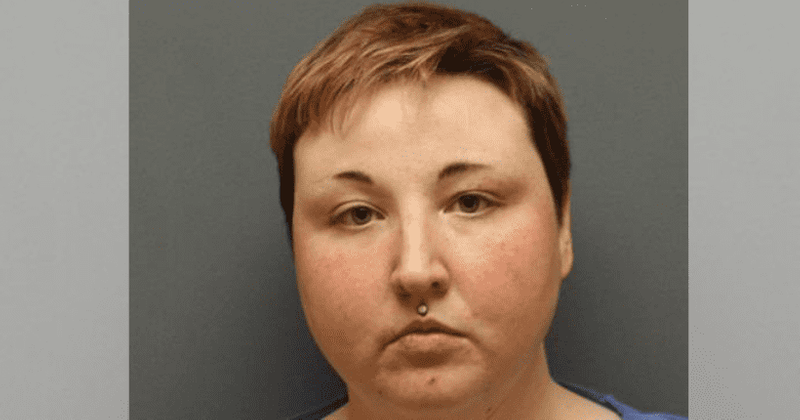 Trigger Warning: The story has details of murder and violence that readers will find disturbing

A 35-year-old mom stabbed her 10-month-old son to death and grievously wounded her 8-year-old daughter at her home in Virginia on Monday. Sarah Whitney Ganoe, from Newport News, messaged her fiancé before the crimes were committed with a threat. "She described the scene that he would see when he came home," said Police Chief Steven Drew, according to a Daily Press. She had texted her saying,"Don’t be sad, but the house will be bloody when you get home." Concerned by this, he made a frantic call to 911. Deputies reached the couple's home and found a "horrific scene."

10 WAVY reports that police said the baby boy named Zell Howard was slashed in the abdomen and had multiple stab wounds. The girl, too, had similar injuries including at least 50 stab wounds. Both children were in the bedroom. While the boy was pronounced dead at the scene, the girl was flown to Children’s Hospital of The King’s Daughters in Norfolk in a critical but stable condition.

Sarah Whitney Ganoe, 35, two young children, a 10-mo boy(deceased) and an 8-yr-old girl, suffered multiple stab wounds.
She is charged with second-degree murder, and malicious wounding of both children. Police have been to Ganoe home "before" #FirstThemhttps://t.co/ZWJTjM29CA pic.twitter.com/6tugOaOZcu

Deputies also found the weapon used for the heinous crime. It was a pocket knife with a 2.5-inch blade. After she had been read her Miranda rights by police, she confessed to the stabbings. Ganoe also told the police that she had bruises on her hand and arm as she put her force behind the stabbings. In addition, a bite mark on her arm led police to believe that it was done by her daughter in an attempt to break away and free herself.

Her neighbor, Clay Connell, noted that Ganoe liked to indulge in witchcraft, and told him so. He said, "She told me she liked to dip into witchcraft a little bit."

Drew said the scene at the house was so horrible that it is sure to stay with the officers for a while. "The officers who went across the threshold and into that apartment, the things they saw, they will remember for the rest of their careers," Drew said, noting that one of them had recently graduated from the academy.

My friend worked with this woman at the Kroger in Your County. I remember my friend telling me that this woman’s behavior at work was strange. This just goes to show you you never know about the people you work with.

After being taken into custody, Ganoe was also taken to a hospital for her "superficial injuries." Later she was shifted to the Newport News City Jail where she is still lodged. Ganoe was charged with second-degree murder, malicious wounding, and two counts each of felony child abuse and is being held without bond. Other neighbors of hers were stunned to hear of the gruesome murder. A neighbor of Ganoe who lives adjacent to the accused's apartment said she didn't hear anything out of the ordinary. It was only after the police arrived that she realized something had taken place. Another neighbor named Buck Wright said Ganoe's fiancé was nice and always said hello to his family. He expressed his shock at the incident.

However, there have been some instances in the past where complaints of "domestic disturbance-type" had been made from the house "a couple of times already this year." Investigators are still trying to ascertain Ganoe's motive for the crimes. Drew said, "What will take place now is trying to understand the 'why' in the history. Those things are ongoing ... Without going into it, let me just say this — for two children, one to be killed and the other to be hurt like that, there's obviously issues there." He commended the work of the officers and personnel at his department, right from the dispatchers to the detectives and everyone in between for their calm and quick response. He said his officers knew "they’d be walking into in a very, very highly stressful situation."

He also added that all the people present at the scene of the crime have been mandated to meet with the police department’s psychologist. "We’re all human," Drew said. "Anything dealing with a child is particularly challenging for us in this profession." He also added, "There’s multiple people who work here in this building who told me that they’re going to go home and hug their kid today, their child. So I think that’s good advice for everyone. ... They’re a gift."