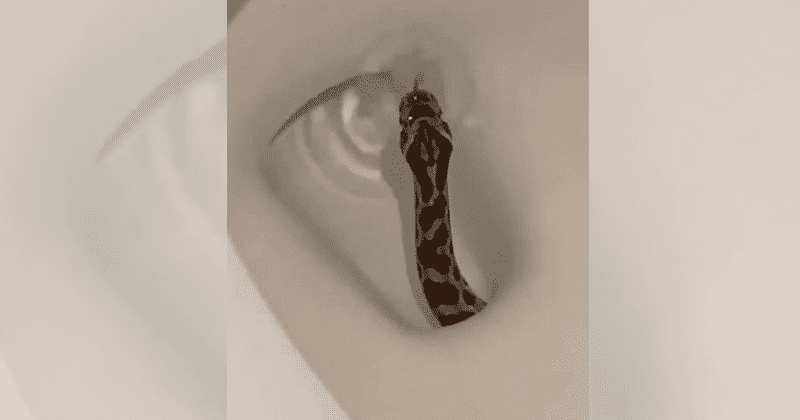 A snake found an unusual spot to get cosy in, and for humans, this should be duly filed under "stuff of nightmares." A man in Texas had his worst fears confirmed when he spotted a snake slithering around inside his toilet. Luckily, for him he wasn't sitting on the throne.  He had a hunch something slimy was there and proceeded to take a video of it. The 30-second video will send shivers down your spine. It shows a snake with a white and brown pattern swimming inside as it flicks its tongue around. The man uses a golf club to try and probably fish it out but we don't get to see whether he is successful or not. The video was posted by a CBS meteorologist in New Orleans named Payton Malone who said it was taken by a friend.

I always thought this was an irrational fear of mine...apparently not. Friend out in west Texas found this. 😳😳😳 pic.twitter.com/jd23gbLkGF

He captioned the clip: I always thought this was an irrational fear of mine...apparently not. Friend out in west Texas found this. The video quickly became viral and has been viewed 2.3 million times. Most people naturally reacted with horror to the video. Nick Shepkowski commented hilariously: Nope. Never using a toilet again.Others like Su recounted stories of the being in the same situation. She wrote: 1 of my dad's co-workers felt something bump his testicles when he was on the toilet. He looked down & saw a copperhead snake in the bowl. Jumped up, ran out of the room, grabbed his firearm (he was a LEO) & blew the hell out of his toilet & shower. Snake got away.

This is particularly frightening for us old guys whose nuts dangle down like bait.

Another user called AnthonyMac0011 recounted: When I was a little kid in north Texas a Cottonmouth came up through our neighbors drain in the bathtub during the wife’s shower. Some people tried to guess the species of snake in the video. One wrote that it was a rat-snake: Harmless great plains ratsnake, they rarely bite (though I’ve been bitten), a friend of those hating rodent-borne illnesses. I generally pick them up without incident. The Mickey Mouse blotch pattern is a giveaway as well as the arrow-shaped markings on the head. rickerchem stated it looked like a "ball python" and called it: one of the most common pet snakes. It probably wouldn’t last all that long on it’s own and likely escaped from somewhere close by.

He added: The color pattern is a little different, but the shape of the head and body is the same as a ball and it’s pretty unique to that breed. Color pattern varies a lot in their breed too.  Some like Margaret Kerlin tried to explain how snakes get inside houses and wrote: I live in Houston and everyone always makes sure the toilet lid is always down when not in use. If there’s a break in the sewer system, in your own line or the cities lines, they’ll come in that way. People are always wondering how snakes get in their homes, this is how. Snakes in toilets are a common sight. In California, a couple found a six-foot-long snake in a toilet. "I lost all trust in restrooms. My husband before he leaves for work always uses the restroom. When he walked into the restroom and lifted the lid he saw a snake," said Irma  Zambrano.

That happened to me. Scared the shit out of me. No pun intended. Not before he bit me though.

In January a Thai woman was bitten by a snake while she was on her toilet. The woman's daughter recounted the experience in a Facebook post, and stated her mom grabbed the snake by its head to try and rip it of off her.