Ceramic Christmas trees were popular in the late 1960s and early '70s. 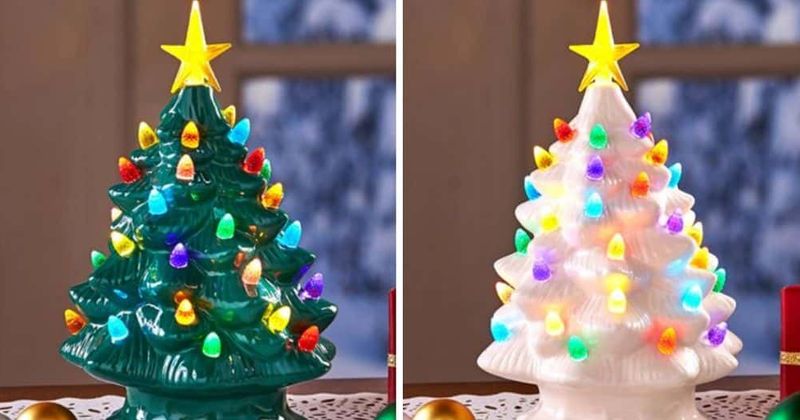 Ceramic Christmas trees were all the rage back in the late ‘60s and early ‘70s and now they're back for their nostalgic value. The classics came in green or white, had colorful twinkle lights, and occasionally rotated and played music. According to Diply, they're back on store shelves, as well as websites, and a lot of them come in a variety of designs to cater to the new generation. Yes, there is the classic, festive green tree but there's also a range of others! There's one in bright, bubblegum pink for those who would love a funky twist. There's a rose gold version of the tree for those who appreciate more modern aesthetics. There's also a plain, pristine, snowy white version; for those who like something different but not too drastic. Oh, there's a Halloween tree: a black ceramic tree with LED lights topped with a glowing jack-o'lantern topper. You could save this one for next year's Halloween maybe? Or perhaps if you're looking to celebrate a gothic version of Christmas?

Last year, many shops around Knoxville were sold out when it came to the vintage tree decor item. Owner of Vintage Treasures, Deena Schrayer told WVLT News that some of the trees were handmade in ceramics classes of the 1970s while others come from a store. Whatever their origin story, there's a sense of nostalgic charm to these items. Schrayer said the trees (especially the handmade ones) are becoming so rare, she recommends keeping it. Many vintage shops will buy them from anyone who is willing to sell them. Some ceramic trees are put up on eBay for an incredible price of $900, but Schrayer said she can't recommend buying one at that price. "Look further," she said. "Don't cheat yourself. An average one at a store like this usually goes for about $75." The knick-knacks can sell for between $75 and $875 on eBay. We found a few under $30 on Walmart.

Very popular on Ebay! If you want to sell one, thats where you sell it

According to TODAY, many people don't seem to mind spending hundreds of dollars on sites like eBay for vintage ceramic Christmas trees. “Everyone who took a ceramics class and celebrated Christmas made one of these trees,” vintage lifestyle expert Bob Richter told TODAY Home. “People put them on top of the television, back when the TV was a piece of furniture.” If you don't have many sentiments towards the decor item and it's collecting dust in your attic you could sell it closer to the holiday season. “The truth of the matter is, they’re not incredibly valuable at other times of the year," he said.

Oh my gosh Martha Ellen it's beautiful. My mother used to go to Ceramics and she made one exactly like that one. I wish I still had it. I would display it and think of her. Thank you for sharing. 🎄💛

Richter, who is the author of A Very Vintage Christmas,” believes that the ceramic trees have gained popularity in the recent past because the younger generation is feeling nostalgic for the ones they had at home as kids. “At the holidays, everybody wants one because it reminds them of the past. And it’s a recent thing within the past couple of years,” he said. “Everybody’s like, ‘Oh, my mom had this, my aunt had this, so I want one.’ … Basically, you’re buying nostalgia. You’re buying the memory.”  For that reason, it might be worth holding onto the little trees for sentimental reasons. “The truth of the matter is, I think it’s great to turn them into cash, and it’s also great to bring them down and plug them in and use them, and tell a story of your grandmother or your aunt or your mother or whoever it was who had them in the first place because I think that’s the true value,” he said. “It has emotional value, and that has gossamer wings.”

Ha! My mom still puts hers out.