Apparently, Tiny Bugs Crawl Out Of Strawberries When Put Into Salt Water. People Are Sharing Videos

People were shocked by the worms and dirt that came from strawberries after it was kept in salt water. 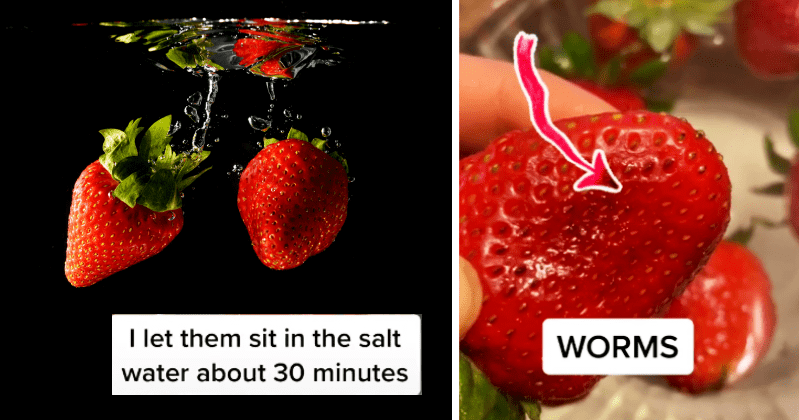 What's summer without fresh fruits? Well, if you're a sucker for strawberries, there's a good chance you're cleaning them wrong and inadvertently consumed more bugs and worms than you'd wished. We've all gotten used to washing strawberry by just rinsing them under running water, but according to new videos, that might not be good enough. Many people are posting videos showing the right way to wash strawberries. So the idea is that you soak them in water mixed with salt to get rid of dirt, bugs, and worms that might be stuck inside the strawberry. They say you must let the salt dissolve before putting the strawberries in, with a few even suggesting adding a little vinegar. Videos that urged people to add vinegar said that it would help minimize the chemicals consumed as the majority of the strawberries bought are not organic but grown with the aid of pesticides.

TikTok users are also divided between using cold water and warm water for cleaning the strawberries. Krista Torres posted a video trying the life hack and starts off saying she was trying the new method because "there are little bugs inside these guys." After soaking them and washing them, you can see small bugs crawling out of the strawberries. "Oh it's so gross. I'm so disgusted right now," said Krista Torres.

You can also see dirt particles remaining in the saltwater mix once the strawberries are taken out. The visual has ruined the fruit for many with some even vowing to not eat them again but then again, it's worth the effort because strawberries are pretty awesome, and let's face it, we've been eating them (with the bugs) for ages and we're all okay. Krista Torres video also showed her from the next morning thinking about bugs crawling out of the strawberries. "So I just woke up and the first thing I thought about was those fricking strawberries. It's not a dream, it's real!" she said in the TikTok video.

Thatnatchats, a TikToker who does microscope videos went viral for her video on washing strawberries because the bugs were more magnified and evident. She spoke to Boredpanda and revealed that she had many requests to try the process. “I believed they wanted to see the seeds up close so I was very surprised to find bugs when looking at strawberries under a stereomicroscope,” said Thatnatchats. She is used to an average of 40K views on a video but the video on strawberries has already garnered more than 2.5 million views. “I was astonished that I had so many people seeing what I have seen. My fans jumped from 40k to 300k," she said. However, she added to take the video with a pinch of salt, and not turn abandon eating strawberries altogether. “These strawberries we eat grow out of the dirt and we shouldn’t avoid them. After all, I love strawberries!" she said.

Thanks to tiktok, all I can think of when I see this is bugs in my strawberries https://t.co/giUgB19aAV

There were a lot of interesting comments about the new strawberry rinsing process. One Facebook user who tried it claimed she found a minuscule spider crawling out of her strawberries. One user, Jess Tuley, responded to a Facebook post about the process, writing: Oh wtf. Why Are we just now being told this?! Collene Moote reasoned, "It's just extra protein. Lol what do you think they did back before all this?"

RJay Harris lost the plot completely, commenting: So you mean to tell me all these years I been eating strawberries that got bugs in them? 🥴🥴🥴 brb, I’m about to go drink bleach. One user hinted it was a Hispanic trick that's been in use over the years. Amanda Lopez wrote: Yeah girl, do it with ALL of your fruit and vegetables. That's an old Hispanic trick. Well that's what my momma taught me and her mamma and so on lol.