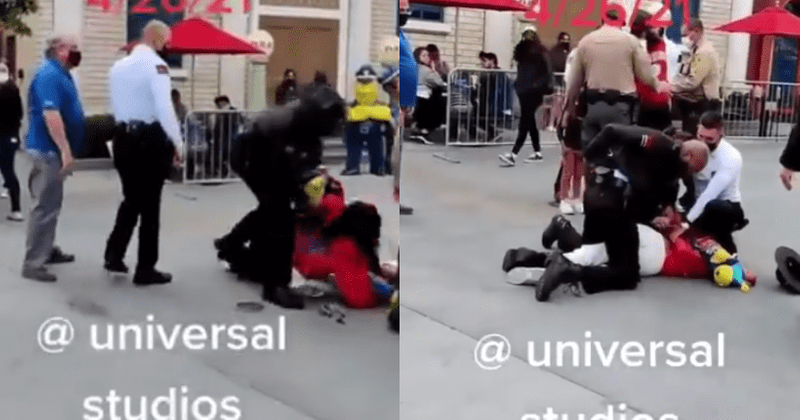 Trigger Warning: The story has graphic video and details of a violent arrest that some readers will find disturbing

A viral video of a mother getting slammed to the ground by security officials at a Universal Studio themed park in Hollywood has caused outrage. She was still holding her child at the time who also goes to the ground with her. Her partner is seen being restrained by other security personnel on the side. While it's not exactly known what started the incident, park authorities came under severe scrutiny at the handling of the entire situation by people. Many online called for action against the people involved and called out the excessive force used. Many compared the actions to growing cases of police brutality that are being reported every other day. In the video, security officers are seen walking behind the family. Another person, a man in a blue t-shirt, is also walking with them. The man in the blue shirt appears to jerk back and then the woman is slammed to the ground by the officials.

The child also falls on the ground but is picked up by another security official and taken to the side. Some toys held by the woman are on the ground. She is lifted and then made to lie on her face and other officers are seen on top of her attempting to cuff her. Her male partner is seeing being restrained on the side by other officers who surround him. The man looks angry. The security officer who picked up the child is seen speaking to him. Meanwhile, the child is seen clearly distressed and crying. But an onlooker with a backpack reached down to him trying to provide some comfort. Another woman on the side is seen arguing with the man in the blue t-shirt as if trying to tell him she wanted to be with the child. Eventually, three people, all onlookers, are seen surrounding the child and trying to provide some relief.

FFS what is going on with all this brutality by cops against citizens? Does every interaction have to be a beat down or death? What a f’ed up country we live in.

Then the female who is faced back towards the group kicks the guy in the blue shirt who holds onto her foot, which is why she proceeds to fall backwards to the ground. I also hear the male say what sounds like, "....that you don't have ni***" as well as "I didn't steal nothing".

The security officials in the video came under a torrent of anger from the public. The person who posted the video wrote that the woman had been sexually harassed by the man in the blue T-shirt: For anyone who has questions: the man wearing the blue T-shirt allegedly touched the woman in a sexual manner. She kicked the man in the shin with her child behind her, and as she turned around and held her child the security officer threw both of them on the concrete. For some, the incident was a clear case of racism. Another person wrote: This is white power brutality. If the guy with the blueshirt touches a woman in the wrong places of her body, she suppose to happily smile at him back? No way you pig.She got harassed and slammed at the floor cuz a white pig jerk! Thx to the video they are going infamous guilty!

@UniStudios I am a black woman, with a black husband the proud mother of black kids. This clip has me crying my eyes out into my breakfast. The trauma inflicted on that family can never be undone. Shame on u for allowing this.
I’m telling everyone I know it’s not safe there. 😢

Others wrote about the need to fire the security personnel involved. One Twitter user stated: This is appalling! That security guard should be fired! The woman should sue the security guard, the company and Universal Studios. Really, has he not watched any of the news? Been living under a rock? Another wrote: Wow, everyday, it’s another case of police brutality This is just unbelievable! The cop needs to be fired and the park and him sued. That woman and child could have been severely injured. The guy in the blue shirt needs to dealt with also. The Daily Dot reached out to Universal Studios for their comments. A spokesperson replied, “a female guest was arrested by Los Angeles Sheriff Department deputies (assigned to the park) and charged with battery."

@UniStudios I am a black woman, with a black husband the proud mother of black kids. This clip has me crying my eyes out into my breakfast. The trauma inflicted on that family can never be undone. Shame on u for allowing this.
I’m telling everyone I know it’s not safe there. 😢

Fat wight guy in blue shirt groped her, her kid was behind her back when the man groped her front & she kicked him in the shin. As she turns around & puts her arms around her kid, security throws them both to the ground over the kick.

The person added, "Based on our review of the entire incident, we are confident that we acted appropriately and that our security personnel did not cause the guest to fall. As this is an ongoing investigation, we cannot comment further.” They said deputies received a call of "patrons refusing to leave, as ordered by park security, due to park violations." and added, "When deputies arrived, they saw theme park security personnel attempting to escort two adults and a child to the exit after they were asked to leave. The male and female adults were engaged in a verbal altercation with park security. Deputies were actively trying to de-escalate the situation with the male adult when the female adult assaulted a park security staff member." The woman's partner was initially "detained pending the de-escalation of the incident and both were escorted off property and released.”