Woman Kicks Swan, While A Man Pushes Another Who Tried To Intervene In Shocking Video 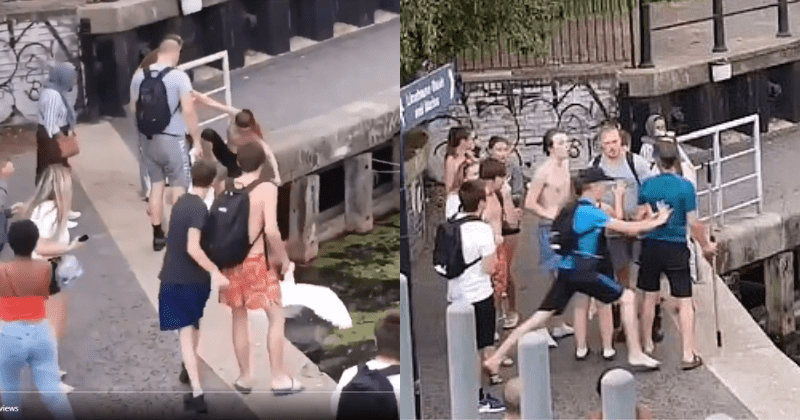 A video of a girl in Britain kicking a swan while a youth pushing another man who tried to intervene in the water has caused a lot of anger online. This comes on the back of a number of incidents of assaults on the winged creatures in various parks across the country.

In this particular incident, there were witnesses who said the girl was in fact trying to break a fight between two male swans, with one apparently trying to drown the other. Other reports stated that the swans were mating before the woman kicked one of them.  According to the police, the girl and the man were part of a large group of people who were seen at the edge of the waters in Limehouse in east London on Friday . They have asked for people for more information about their whereabouts, reports Daily Mail.

I don’t even know what to say pic.twitter.com/bhTfhg1iYP

In the video taken from a high vantage point, the girl can be seen kicking the swan. Just then, another person comes in to remonstrate.  He is soon pushed into the waters by a young man. The young man was wearing a black cap and a blue t-shirt. He was seen going off on a scooter near the end of the video while saying "How's that! How's that."

Witnesses also said there were many others who tried to separate the birds before the women kicked intervened. One witness said, "The video only lasts 30 seconds. What happened prior to that was that for some reason, a male swan got into a fight with another swan couple nearby.  No one was paying attention at that time so no one knows what was caused the conflict. Swans are extremely emotional animals and very territorial. So this male swan went after the other couple swan. And he tried to murder the other male swan by using his mouth and neck to wrestle the other swan’s neck into the water trying to drown him."

Hope the local police and @RSPCA_official can catch the stupid woman who kicks the swan and the guy in blue who thinks it clever to push someone into the canal. #dregs

Another witness said, "I watched the entire episode and the swans were not mating, they were fighting to the death. One was father of nine cygnets nearby and one was from a pair who were being territorial. They had been sparring for some time before crowds gathered and had sparred several times in previous days without a fight actually breaking out. The girl was trying to separate the swans to avoid one of them being killed."

Are they not trying to stop the swans from fighting?? Or were they actually doing it? I don’t know because I’ve never seen swans do it... 😬😬😬😬

The swans were mating...that's how they do it. The idiot woman understanding nothing about nature kicks the swan, the man tells her and he gets shoved into the water. Absolute idiots.

Another added, "I was there. I don't know any of the people involved, but I saw the whole thing. One swan was very definitely attacking the other. He (presumably) was biting the other's neck and attempting to submerge its head.  This went on for an extended period of time, with onlookers attempting to break them up by making noise and after some time, throwing things. There was quite a sizable crowd on the bridge. Obviously this is irrelevant to the pushing into the water of the man who intervened. But the people involved were not just baiting the swans - it was an attempt to break up an attack."

The Metropolitan Police are on the lookout for the two people involved in the incident. We had recently reported about a mother swan at a Manchester park who died of a "broken heart" after vandals destroyed most of her eggs before they hatched and her mate ran away.

In another similar incident, a jogger kicked a young cygnet in Richmond Park in south-west London. The cygnet succumbed to injuries it suffered during the attack and died.