It was on the persistence of his daughters that the man invesigated the noise and found the baby wrapped in plastic. 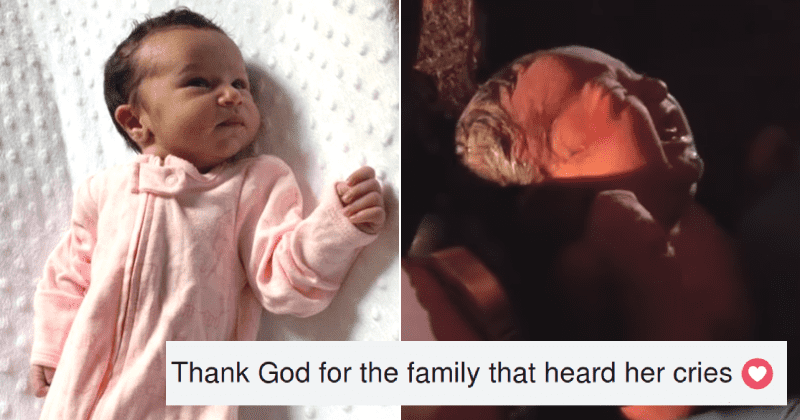 Police have released video of the moment they found “Baby India”, wrapped in plastic, in the woods, in Georgia, according to People. The footage taken on June 6 shows a man kneeling next to a plastic cover, in the grass. In the video that was released by the Forsyth County Sheriff’s Office, you can hear the man tell emergency responders that he heard a cry from his home, “My kids said, ‘That’s a baby,’ and I said ‘That’s an animal.”

Alan Ragetz, the man who found the baby, explains that he had gone to check on the plastic packed before calling the authorities. The homeowner also said he wouldn't have stepped out to investigate the noise if it hadn't been for the persistence of his daughters, according to AJC. “We went down, pulled it up, there was a poor little baby wrapped in a plastic bag,” said Alan. “She was alive, she was crying, so we figured that was a good sign.” Alan Ragetz believes the baby was only 20-30 minutes old.

#FCSO is continuing to investigate & follow leads regarding #BabyIndia We're happy to report she is thriving & is in the care of GADFACS. By releasing the body cam footage from the discovery of Baby India we hope to receive credible info & find closure. https://t.co/ICI42mjxSv

In the video, the cries of the infant can be heard as police don their protective gloves before unwrapping the plastic bag. The crying baby is found covered in blood with her umbilical cord still attached. The officers can be seen assessing the baby girl for bruises or general discomfort. One of the officers can be heard saying, “Look at you sweetheart. I’m so sorry.” The baby then firmly grasps one of the officer’s fingers and makes direct eye contact in an intense moment.

The baby is then cleaned before being wrapped up in multiple layers of blankets. The police confirmed that the baby girl was moved to a nearby hospital, where after initial assessment she was found to be in good health. “We are happy to report that Baby India is thriving and is in the care of the Georgia Department of Family and Children Services,” said the Forsyth County Sheriff’s Office. Police confirmed the baby will remain in the care of the Department of Family and Children Services.

I wish we'd reserve judgement until we know the circumstances of this mother. Is she a child herself who has been raped... or incest? If so, has the infant been forcibly taken from the birth mother & has she been threatened? Is she a child or adult who is being sex trafficked?

“It is, without doubt, a divine intervention that this child was found,” said Forsyth County Sheriff Ron Freeman, during a press conference as per reports by AJC. Ron Freeman said the caller, who lived near the place they found baby, had just returned home from a vacation when they heard the cry of the baby. “Thank God they went out and investigated that, and immediately called 911,” said Freeman.

The County Sheriff’s Office has been flooded offers of foster and donations. The Sheriff’s Office said in a Facebook post: We have been flooded with love for Baby India, including offers of foster or adoption and donations. We are so very thankful for the outpouring of love and support, and would not expect anything less from our amazing community

Police have no information on the child’s parents. The baby was named India by the officers. Police said they had now released the video in the hope that it will lead to someone coming forward with “credible information” on the identity of Baby India. Police are hoping it will help all those involved find some closure in the case. Forsyth County Sheriff’s Office also released pictures of the baby.

Safe Haven Law in Georgia permits any mother to leave a baby up to 7 days old with an employee of any medical facility in the state. In the case of baby India, it remains to be seen if the mother will face any charges and what the charges would be.