Gennady Shulga, a Russian journalist, was arrested over his alleged role in the protests to release opposition politican Navalny. 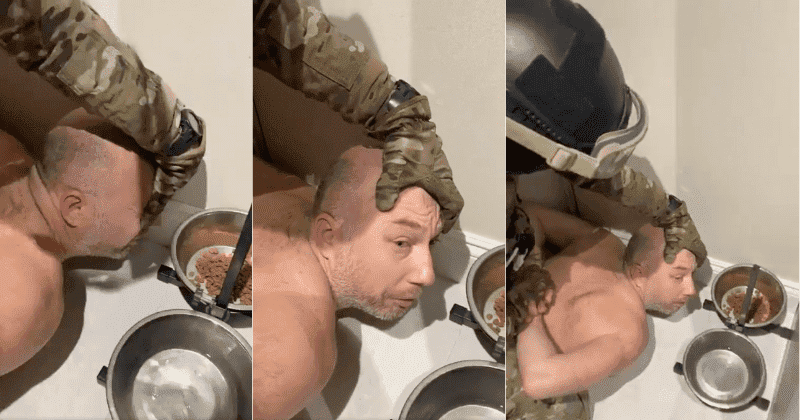 A horrific video of a Russian journalist being harassed and brutally pinned down at his own home has sparked outrage. The video raises concerns about the freedom of the press in Russia and, in general, the attitude of the government against journalists. The 10-second video circulating online shows cops pinning down a bare-chested Gennady Shulga, a Russian journalist, onto the floor. There appear to be more than two uniformed people and one of them can be seen holding Shulga's hand behind his back while the other can be seen seizing his forehead with the other. They can be heard questioning the journalist's alleged role in last month's protests against the arrest of Alexei Navalny, an opposition politician. His face can be seen pushed towards the dog's food bowl on the floor.

Highly disturbing video of police in Vladivostok interrogating and humiliating local journalist Gennady Shulga. Cops raided his home and “questioned” him about the opposition’s Jan. 23 protests. Especially noteworthy: the police themselves leaked this footage. pic.twitter.com/aEdjfPXnqa

The video shows the cop asking Shulga to identify himself to the camera, barking at him to give his first name, middle name, and surname for the camera. "Shulga, Gennady Borissovitch," the journalist replies, reported France 24 Observers. "Do you know why we've arrested you?" the man asks Shulga, to which he responds: "Well, I can more or less guess..." There have been widespread protests in Russia in the wake of the arrest of Kremlin critic Navalny. The opposition politician also alleged that he was poisoned by Putin's people.

There was a huge rally organized in Russia against Putin on January 23, calling for the release of Navalny. At least four political activists, including Gennady Shulga, were arrested on February 6, according to Russian opposition media Novaya Gazeta. Shulga, who reportedly runs the media NewsBox24, is known for his pro-communist stance and coverage of various protests. He has also been listed as a witness in a criminal case the police are pursuing against protesters who blocked traffic. It has been reported that police broke into his home to investigate the case. "I came home from work, from the night, went to bed at about 7 in the morning. And at 7.15, somewhere the wife comes running: 'Gena, they knock there!' I knew immediately where this would lead," recalled Shulga.

"I wanted to quickly close something in my computer, which is loaded by default. While my wife was dragging on, literally five minutes passed. You can't really get into trouble with them, they immediately started the saw. The wife got scared and opened it. They run in with machine guns, in masks... 'Lie down, b****! Lie down!' I was in the toilet, they dragged me out and let them carry me on the floor, ask questions. The operative was shooting on an 11th iPhone I noticed," he said. "They said that for internal use. Handcuffed. I showed them my passport - and they started the search."

Shulga said the uniformed men took away his equipment including a working laptop and telephones for investigation. He also said they were at his house for around four hours suggesting there was a lot more that was done beyond the 10-second video clip that sparked outrage. The day after the cops raided his home, he posted a video on the NewsBox24 YouTube account, explaining he was taken for questioning in the anti-extremism department of the local department of internal affairs. He was let go around 1 pm. "I was held on the floor [in my house] and interrogated as if I were a drug trafficker, a rapist, or a terrorist. […] I knew that they were going to publish the video because they mentioned it […] even though I didn't make a confession of any sort in the video," he said in the video.

"I think it's strange that they published it because in wanting to humiliate me, they've basically humiliated themselves," Shulga added. "When people saw my face next to my dog's food bowl, there was widespread outrage. People saw that the police — [by] doing that and filming that — was just trying to humiliate me. I'm just glad that my daughter wasn't at home at the time."