The dog is thrown from one side to the other and is seen yelping towards the end of the video. 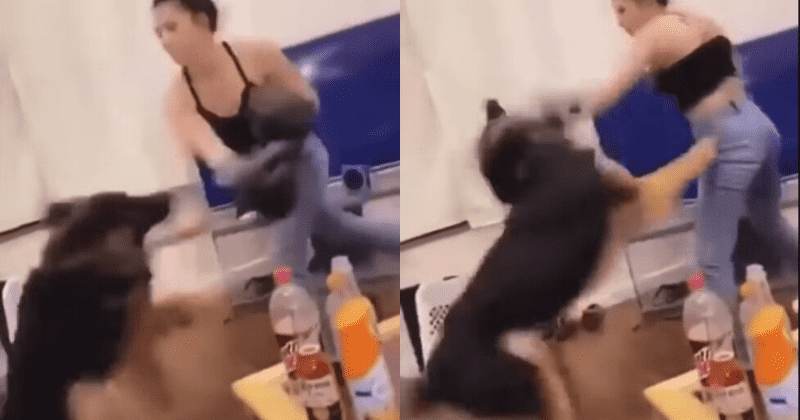 An Idaho woman is in the dock after she was seen punching her dog several times while wearing a pair of boxing gloves in a video. Animal lovers have called for the woman to be punished and an investigation by an animal rights group is also ongoing. In the clip, the woman who is from Treasure Valley is seen in her workout clothes as she moves in a menacing manner closer to her dog as though in a boxing ring. A dog can't obviously fight back and her dog that looks like a German Shepherd is seen looking helpless and confused as its owner throws one punch after another. The punches are clearly hard and not something that's playful to mess around with the dog.

The dog is thrown from one side to the other and is seen yelping towards the end of the video. The person taking the video is also no less sadistic as we hear sniggers and laughs coming from the background. The video is shot in what looks like a living room of the woman. The man behind the video is heard saying, "We're boxing animals. Where's Sarah McLachlan?" in reference to the Canadian singer known for animal cruelty prevention advertisements. Just then the woman punches the dog's head four times. The dog growls and tries to bite off one of the gloves and lunges at her. At one point in the video, the woman realized that she hit the dog hard and says, "I hit him so hard I felt that through..." The clip was apparently first posted on Snapchat after which it becomes viral.

Idaho Woman Investigated for Animal Abuse After Boxing Dog https://t.co/Qti60lztnk via @heavysan
How utterly stupid! Who in their right mind punches a dog 10 times in the head with boxing gloves?! Besides potentially hurting or even killing the dog, this is how you make it

According to a report in TooFab, the woman defended her actions when asked about the incident by a follower who saw the video. The person shared a screenshot of the interaction where she apparently said, "That's my dog. He plays hard. A girl gunna hit him a little bit and you guys wanna press some girl hitting him with gloves. Never got hurt and was playing the entire time. I'd never let my dog get hurt. I do what I do with my dog. He thinks it's a game was he hurt at all in the video or at all? He's literally laying with me in bed." The woman has put her Instagram in private mode since the incident went public according to the report. The Idaho Humane Society is probing the incident and also put up a post on their Facebook page.

They said the video 'has been shared through many social media networks and our Animal Care and Control office is receiving an overwhelming number of phone calls and emails.' They also stated they have started an 'official investigation' on the matter and also already identified the person on the morning of May 4. The post added, "...we sent a Humane Officer to discuss the situation. The investigation is currently pending review at the local prosecutor’s office for a charging decision. The statute the prosecutor may decide to cite with is 25-3518. BEATING AND HARASSING ANIMALS." The society also emphasized that all acts of cruelty and harassment of any kind if animal 'shall be guilty of a misdemeanor and shall, upon conviction, be punished in accordance with section 25-3520A, Idaho Code."

aggressive! Someone like this shouldn’t own a dog! It’s cruel! If you punched someone else like that it would be assault & battery! This is sickening.

It also appealed to people to "Please stop contacting us as this delays other urgent cases from receiving immediate attention. Thank you for your understanding and cooperation in this matter."