The video was taken by a tourist who was taking a ride on the mother of the elephant calf in Nong Nooch Tropical Gardens in Thailand. 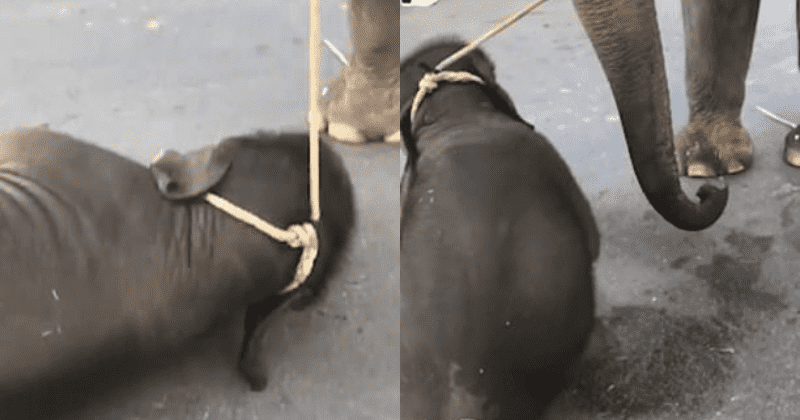 Update: This story was originally published on May 27, 2019. It has since been updated.

Animals sometimes don't deserve humans who cruelly exploit them for their own selfish means. There have been horrific stories of abuse and neglect meted out to these animals. Recently, a video of an elephant calf tied to its mother and collapsed in Thailand has gone viral reports the Daily Mail. The video, shot by a Philipino tourist, who works as a teacher at Myanmar was taking a ride on the calf's mother along with other tourists at the Nong Nooch Tropical Gardens in Pattaya located in Eastern Thailand in May 2019. The elephant calf who is around a year old collapsed due to "exhaustion" while tied to its mother as she gave rides to tourists. In the video,  the calf has a rope tied around its neck, as it lay on the ground as temperatures approached a searing 40 degrees Celsius. Concerned onlookers commented that the calf looked tired.

After a while, the calf gets up and scampers away to keep up with the adult. The unnamed tourist who refused to be identified said that the calf was clearly on its last reserves of strength. It is not known how long these elephants were out in the sun while taking tourists on a ride at the Nong Nooch Tropical Gardens.

The tourist who was with friends on a vacation said, "There are many more baby elephants tied with their mother walking around with tourists at their backs enjoying under the heat of the sun while these elephants are suffering. This one baby elephant was so exhausted, and you can see the mother comforting and encouraging her to stand. I'm just concerned for the elephants and want to ensure their welfare is properly taken care of." When confronted about the incident, a spokesman for the Nong Nooch Tropical Gardens refused to believe that the elephant was tired or being mistreated.

The spokesperson said, "All of the elephants are healthy and treated very well. If there is a problem they are treated by vets. All of the babies here are healthy." The incident comes in the wake of another baby elephant dying in Phuket in southern Thailand a month ago. The elephant who was nicknamed Dumbo had a skeletal frame and had broken its back legs while trying to lift itself up.  Only three years old, the elephant suffered from an infection and had become very weak. While Dumbo was taken to a veterinary clinic in Krabi, he was not able to survive much longer and died on April 20.