Both the individuals are noticed having their phones held in their hands as the girl tries to protect him from the cops. 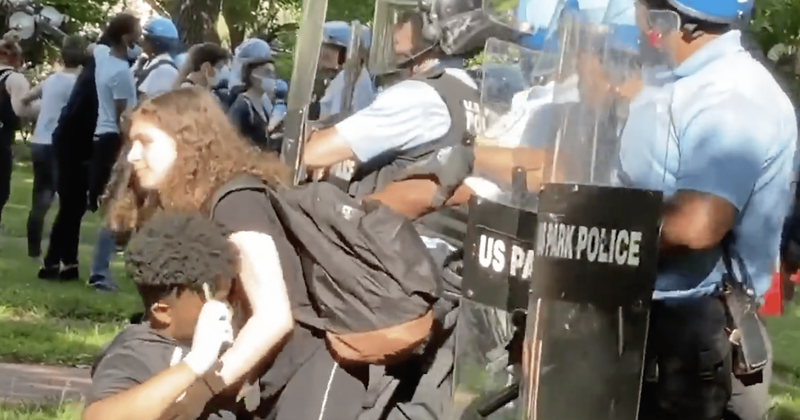 As peaceful protests turned violent following the death of George Floyd, humanity doesn't seem to fail. A powerful video was shared by NBC reporter Shomari Stone which showed an incident that occurred at a protest in Lafayette Park near the White House on Sunday. The clip shows a young white girl hopping over a barricade to stand between a young black man and the police as the law enforcement in riot gear approach. As the protest was happening, several individuals jumped the gated barrier at Lafayette Park as US Park Police rushed to push them back. According to sources, the White House is behind the US Park Police I & the Secret Service. We see several witnesses take videos on their phones so we may receive even more info about the incident shortly. The park had police officers in riot gear slowly make their way towards the crowds gathered and attempt to move them away. They were prepared to push them back in the event of a riot.

I will never forget this moment.
A young black man jumped the gated barrier in Lafayette Park near the White House.
Then a white girl jumped the barrier and put herself between the young man & US Park Police to protect him. #historicmoment May 31, 2020 #GeorgeFloydProtest @msnbc https://t.co/4xrGNqo9Mk

The protestors began to form a wall just behind the designated area which the officers demanded that they retreat to. A barricade was soon made and the young black man jumped over it and kneels down a few feet ahead. He was unarmed and wasn't appearing to lay any threat. As the police officers continued to move forward to order the man to move back, a young white girl steps in front of him and also raises her hands up.

Keep Standing Up for your Rights and Beliefs Monte. You have Millions of People Standing with You. Young Leaders are Key to This Country’s Progess.

Both the individuals are noticed having their phones held in their hands as the girl then also kneels to the ground in front of the man. US Park Police in riot gear with shields moved forward and started to push the people away from their man-wall. Some protestors in the background are seen arguing with the advancing police officers. The young girl stands up and also does the same as the police officers start telling the man still on his knees to get up.

The parents of that young man and young woman should be proud.

The two of them continue to stand their ground as the girl turns towards the man with her hands held up. Refusing to budge, the two of them stand before the officers. After the video went viral on Twitter and Reddit, a person named Monte tweeted claims that he was the young black man in the footage. He said that police threatened to hurt him if he didn't return to the other side of the barricade. Replying to a comment saying: "The Voice of Reason was the officer who quickly defused the situation and spoke to the kid, while patting him on his arm. That’s how a Professional Officer does his job." the user said: "Wrong I’m the young boy and here’s more of them threatening me to get back “or else I’m going to get hurt”"

There is much to infer from this incident and the display of solidarity is beautiful and speaks for itself. Unfortunately, it also brings to light an uglier side of privilege in American society and this is part of the bigger picture and the reason behind the protests. Even on Reddit, the post with the video stirred ways as several users wrote many powerful comments. One user summed up the sentiment of the protestors saying: "What's worse? That she instinctively knew she had to step in to protect him, or that we all instinctively know it too?" Another added: "A powerful image. Our kids are the only hope we have to save this country's soul." Yet another person wrote: "This is the kind of privilege I can get behind. Respect to her for knowing it exists and she has it and double respect for putting it to use in this situation. Powerful."