While they are not fatal, it does cause discomfort and distress for your dog 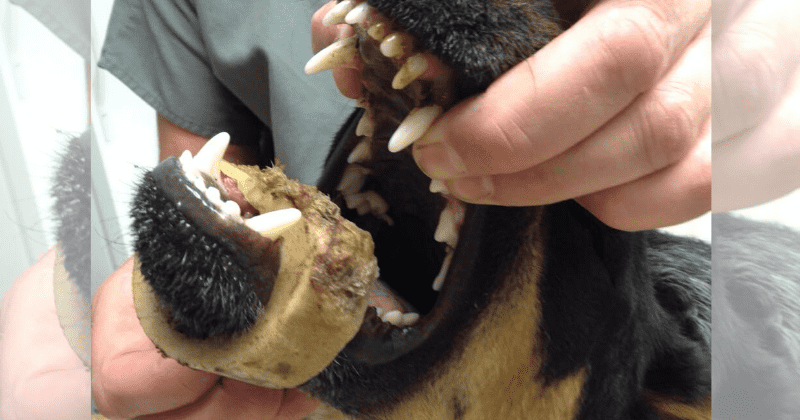 As a pet parent, you are bound to shower your pooch with love and treats and sometimes these include marrow bones. As tasty as they are for your dog, these can put your furry pal in to some trouble and discomfort. Off late, veterinarians have been getting quite a few cases of it getting stuck to the jaws of dogs which are difficult to remove at home, as they get locked into their lower jaw.

The Wasson Memorial Veterinary Clinic in California highlighted the dangers of these marrow bones. It shared a picture of a  dog with the marrow bone tightly wound around its lower jaw. The clinic captioned the picture: Watch out for marrow bones. Here's another unlucky dog. While they may not be painful, they cause a lot of discomfort for the dog. Similarly, a dog in North York, Canada, had the bone stuck to his jaw. The 10-month-old dog named Ginger was on his way to an emergency veterinary hospital when the owner decided to drop by the fire station and ask for help.

The firefighters, in turn, took the dog to another animal hospital where they removed the bone used a handheld tool called the Dremel which is often used on metal, glass, wood, and even bones. These marrow bones get stuck on the canines fangs causing their lips to swell, and thus locking the bone around their lower jaw. Usually, anaesthesia is administered, and vets then shake the bone off till it loosens, and if that doesn't work, the bones have to be cut from the sides.  In another case, a three-year-old Lab/shepherd-mix named Dottie also got into the same trouble in Manhattan. His owner David B. Hernandez got really worried when he saw that a three-inch beef marrow bone ring was stuck around her lower jaw and was locked behind her canine teeth.  “I rushed over to Dottie but she started to panic, thrashing around like a fish out of water,” recalled Hernandez, who is himself a canine behavior specialist.

He tried to remove the bone himself but he was scared he would harm her and cause her pain by breaking one of her teeth. Eventually, he realized he needed a vet to do the job. He took Dottie to the ASPCA Animal Hospital (AAH) to get her treated. Dr. Maren Krafchik, a veterinarian at the hospital said, "Dogs love bones, and they’ll swallow them, too." She added that Dottie was lucky as the bone didn’t break any of her teeth, or splinter and get stuck in her oesophagus. The doctors finally used a Gigli wire, used for bone cutting, to free Dottie after anaesthetizing her. The procedure took less than a minute but the ordeal was traumatic for both owner and dog.

Dog tip of the week:
THE DANGERS OF MARROW BONES
please take note and do not give your dogs marrow bones. The bone gets stuck on the dog’s canines and then when the lips swell it locks the bone around the jaw. Vets usually put the dog under anesthesia and SAW it off. pic.twitter.com/3e6xDUxDf8

"It was an exciting moment for staff. There was a lot of cheering when the bone came apart. Dottie was popular that day," said Krafchik. Hernandez added, "After she woke up, I could tell she was feeling 100 percent better because she was back to her old ways." Barring slight bruising and a lip swell,  Dottie was in good health overall.