She said the anthem being played when she was given the medal seemed like it was done "on purpose." 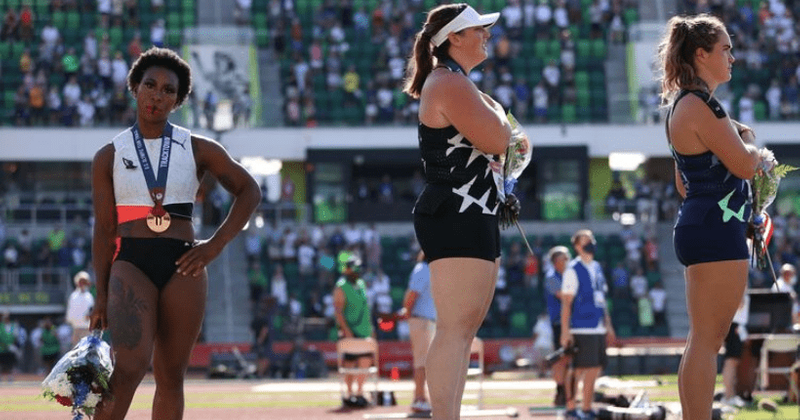 US athlete Gwen Berry courted controversy once again, by turning away when the national anthem was being played during the Pan-Am Games. The hammer thrower had just received a bronze medal and was at the podium when the "Star-Spangled Banner'' began playing. Berry put her hand on her hips and turned towards the spectators as the other two athletes - DeAnna Price who won the first prize and Brooke Andersen who won second place - faced the flag as they put their hands on their hearts. "I feel like it was a setup, and they did it on purpose. I was pissed, to be honest," she said according to an ESPN report. In the end, she draped her T-shirt with the words "Activist Athlete" on her head.

Stop playing with me pic.twitter.com/WLN3clqOCM

Susan Hazzard, the USA Track and Field spokeswoman however said the anthem played at the scheduled time as had been the case in previous days of the sporting event. She said "the national anthem was scheduled to play at 5:20 p.m. today. We didn't wait until the athletes were on the podium for the hammer throw awards. The national anthem is played every day according to a previously published schedule.'' But during the medal ceremony on Saturday, the music started at 5:25. But Berry was not satisfied with this explanation and said it was not really a matter of coincidence.

Gwen has the right to express herself as she chooses. She competed in this meet as a private citizen. When she goes to the Olympics she will represent the USA. I think it's a fair conversation to have on how someone should be expected to act when she represents the USA

"They said they were going to play it before we walked out, then they played it when we were out there. But I don't really want to talk about the anthem because that's not important. The anthem doesn't speak for me. It never has,'' she said. Berry is not new to controversies. She raised her fist on the podium after winning at the same event two years ago. She is heading to Tokyo for her second Olympics, where she has promised to once again raise the cause of social injustice back at home. "My purpose and my mission is bigger than sports. I'm here to represent those ... who died due to systemic racism. That's the important part. That's why I'm going. That's why I'm here today," she said. The U.S. Olympic and Paralympic Committee might have decided not to punish protesting athletes at the trials or in the games in Tokyo.

Hating America is the new grift.

But The International Olympic Committee is set to enforce a rule banning demonstrations inside the lines. About the preparation for the Olympics, Berry said she needed to get "my body right, my mind right and my spirit right'' for the Olympics. She added she did not need the podium in Tokyo to have the biggest impact. She said, "I don't need to do anything sport-wise. What I need to do is speak for my community, to represent my community, and help my community. Because that's more important than sports." There were many high-profile reactions to Berry's gesture on social media. Republican politician Ted Cruz took to Twitter and wrote: Why does the Left hate America? Sure, we have our faults, but no nation in the history of the world has liberated more people from captivity, has lifted more out of poverty, has bled more for freedom, or has blessed more w/ abundance. God bless America.

Takes the benefits of representing her country, but acts like a spoiled brat.

The public also had a lot to say. Matt Hodler wrote: People complaining about Gwen Berry representing the USA need to hit the gym & start practicing their hammer throws because she earned her spot in Tokyo. I’m glad the team has at least one athlete activist - & I wish more white athletes would act in solidarity, a la Peter Norman.