Kris Busching, his dogs, and a friend got lost during the hike. Busching tumbled down a canyon while trying to retrieve water and died. 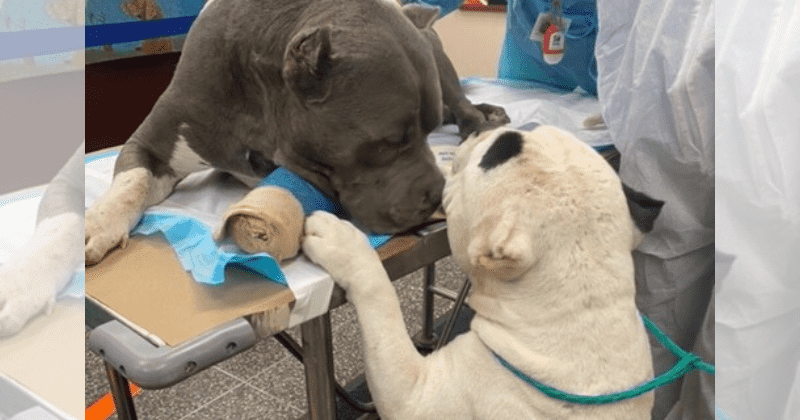 With their owner dead after a tragic hiking accident, his two dogs are providing comfort to each other in this time of pain. Pictures of Tonka and Little P touching each other's noses tells the heart-wrenching story of their owner, Kris Busching, 33, from Colorado who died a few days ago. Busching, his two dogs, and friend, Mark, got lost during a hike. They were unable to find their way back home for two days. Hungry and thirsty, Busching attempted to descend into a canyon in order to retrieve some freshwater. Unfortunately, he tumbled to the bottom of the canyon and died on impact. He tried to save the dogs who were also with him and was successful in doing so. His dogs survived the fall sustaining injuries. Faithfully, they waited beside their master till help arrived after another day and they were rescued along with Mark.

A GoFundMe started for the dogs gives more details of events post the accident From the top of the canyon Mark, who could not get to them, lit signal fires and hollered for help. He was found the next day by search and rescue helicopters. When search and rescue got to Kris his dogs were next to him, having not left his body since the fall. Mark refused to leave Colorado without TONKA and LITTLE P. When all three were stable and able to travel he picked them up from the local shelter where police had taken them and is currently making the drive back to Long Island to bring them to Kris’s family before he returns to Florida. The two dogs are now under the care of a New York-based nonprofit animal shelter called Mr. Bones & Co. The dogs are expected to recover soon from their injures.

2 Dogs Sweetly Comfort Each Other After Owner Died in Tragic Accident While Hiking with Them https://t.co/vLR5qhFi4A

The shelter is now trying to find a home for them both and wants to make sure they are not separated. Busching's family was devastated to hear the news of his death. Mark took the dogs to Busching's family in Long Island, New York, but they are unable to care for them due to the funeral expenses, the increasing cost of medical care for the dogs, and the grief that they are dealing with. Thankfully, Mr. Bones & Co stepped in and offered to take the dogs in also take care of their medical treatment. While at the veterinarian, the two were seen comforting each other. A video uploaded by the organization shows the younger dog, Little P climbing onto the bed with his two hind legs to greet his doggo companion. The two then touch each other's noses. The video is captioned:  THEIR BOND IS EPIC. We are searching for a home for two boys who lost their world suddenly when their dad died protecting them on a hiking accident last week.

It continues: The level of loyalty and love that radiated from these two as big brother TONKA was admitted to our emergency animal hospital @amcny so that his leg could be saved needs no further caption. His bond with LITTLE P is forever. The post also sent out a message for adoption and further stated: If you are an active home prepared to give these boys the world their dad intended for them, please complete the application at www.mrbonesandco.org/adopt. We will consider all states within driving distance of New York City. The GoFundMe page also asked for help from the community: We can all easily place ourselves in Kris’s shoes and would give anything to ensure our own dogs were taken care of in the face of tragedy.

It said further: His family, devastated to lose him, is overwhelmed with funeral expenses and unable to afford the extensive emergency surgery needed to save TONKA’s badly broken leg and the x-rays to ensure LITTLE P’s jaw is not broken. They are just as heartbroken to not be able to care for his dogs.