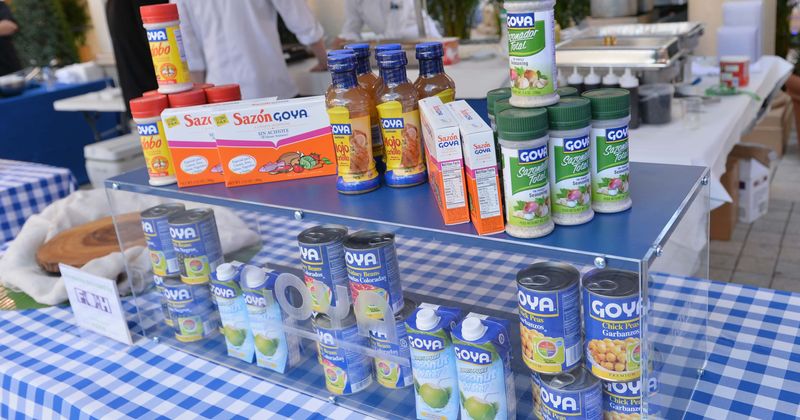 In what turned out to be a controversial visit to the White House, the CEO of Goya Foods, Robert Unanue praised President Donald Trump and said that the country was "blessed" to have him as a President. He made this statement at the White House where President Donald Trump hosted Latin American leaders on Thursday. This was prior to the signing of a Hispanic Prosperity Initiative executive order, reported The Denver Channel. Unanue heads the country's largest Hispanic-owned food company and has been the chief executive of the family-owned operation since 2004.

The CEO of @GoyaFoods is at a White House event saying we're
"blessed to have a leader" like Trump.

“We’re all truly blessed at the same time to have a leader like President Trump, who is a builder,” Unanue said. “And that’s what my grandfather did. He came to this country to build, to grow, and to prosper. And we have an incredible builder and we pray, we pray for our leadership, our president and for our country, that we continue to prosper and to grow.”

His generous words of praise for the president have caused a backlash and became a trending topic on Twitter as social media users were unimpressed with Unanue's heedless support. They are now boycotting the business with the hashtag "GoyaAway."

Trump has vehemently expressed his opinions about the Hispanic community since the beginning of his presidential campaign. Part of his promises as president was to build a wall to stop illegal immigration from Mexico. Referring to Mexican immigrants, Trump in a speech had said, "They are not our friend, believe me. They’re bringing drugs. They’re bringing crime. They’re rapists. And some, I assume, are good people." He went out of his way to alienate the Latinx community as part of his election campaign and has continued to do so after. As a Hispanic himself, Unanue's inconsiderate praise obviously peeved the community.

Goya continues to work for the prosperity & education of our country! #GOYAGIVES two million pounds of food to food banks across the nation who are in desperate need of food for families impacted by COVID19. pic.twitter.com/ZUdxRUnpBl

The food company has pledged to donate 1 million cans of Goya chickpeas as well as 1 million pounds of food to food banks, reported NPR. A statement was released by the company that restated it's support for the president and chose not to acknowledge the negative reaction this had invoked. "Our country faces a time of historic challenge but we will meet that challenge together and continue to work towards greatness, focus on a strong recovery, and hold onto the hope for a healthier future for all," Unanue said in the statement.

Oh look, it’s the sound of me Googling “how to make your own Adobo” https://t.co/YOScAcyAnC

.@GoyaFoods has been a staple of so many Latino households for generations.

Now their CEO, Bob Unanue, is praising a president who villainizes and maliciously attacks Latinos for political gain. Americans should think twice before buying their products. #Goyaway https://t.co/lZDQlK6TcU

Goya Foods is a staple in Latinx houses but the company's allegiance to a racist president is making many from the community reconsider their support. People like Alexandria Ocasio-Cortez, Julián Castro, among others are calling for a boycott of the food company. United We Dream, an immigrant youth-led organization, has also started a petition calling for a boycott. "Today the CEO of Goya Foods praised Trump and aligned the Goya brand with Trump’s white supremacist agenda. He even went as far as stating that we are “blessed to have a leader like Trump. This is unacceptable. We all know that Trump has not stopped attacks on immigrants, Latinx folks, Black people, and all people of color, since day 1. We must show the CEO of Goya Foods Robert Unanue that we won’t stand for this," the petition stated.

We’re all free to do w/our frijoles as we wish, but if you’re gonna #boycottgoya, pls don’t throw products in the trash. Donate the products to a food bank. And if you choose, u can replace your adobo with @badiaspices, Conchita, Iberia, Diana....many alternatives in the market. pic.twitter.com/maSoMnXw5D

It went on to state, "If Goya wants our business, they must respect and fight for our humanity! Goya depends on our business and our communities continuing to purchase their products. Add your name and show your commitment to boycott Goya Foods now!"

Speaking to NBC News Latino Victory Fund CEO Nathalie Rayes said, "It's shameful and appalling that the president of Goya Foods is praising the most anti-Latino president in the history of our country. President Trump has disrespected and attacked the Latino community since Day 1. We call for a boycott of Goya Foods products and anyone who stands with Donald Trump and against our community."