Pink Mocks Low Turnout At Trump Rally, Calls It 'Donkey Show': "I Sold That Place Out In 5 Minutes"

The President was furious was with his campaign manager for hyping up huge crowds and delivering less than 7,000 people. 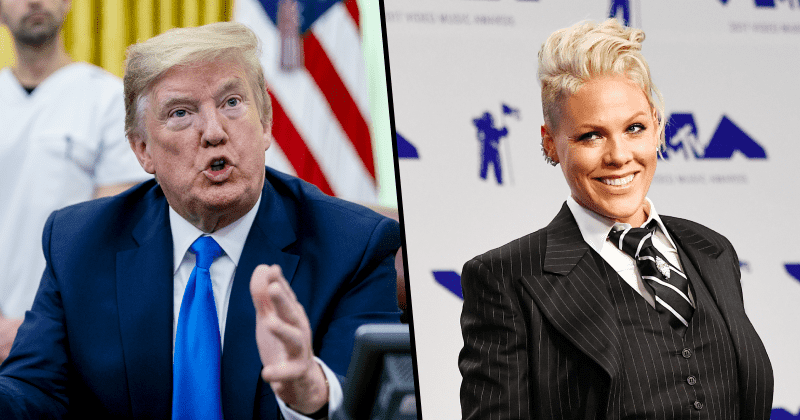 President Donald Trump and his campaign were priming for a crowd of more than 100,000 people at his Tulsa rally and boasted about the possible turnout for weeks on end. To the President's massive disappointment, less than 7,000 people turned up at Trump's post lockdown rally, reported CNN. Singer Pink mocked the President's low turnout at his Tulsa rally at Oklahoma and called it a donkey show. The Trump campaign claimed Black Lives Matter protestors stopped Trump supporters from attending the rally without providing any evidence whatsoever. No clashes were reported between protestors and Trump supporters and it just seemed a poor excuse for the low turnout.

Pink posted multiple videos and images of the relatively empty Tulsa venue, and wrote: I think I sold that same place out in five minutes. #donkeyshow. She joked about people being "dressed as seats." The blue empty seats at what was supposed to be red rally loomed over Trump from all sides as he addressed the meager crowd. Trump's campaign had also organized events outside the venue, to get the President to address the spillover crowd but they had to be canceled owing to the poor turnout.

Dear Donnie,
Well, the reviews are in and you laid an egg in Tulsa! And man, you were sweating bullets up there. The optics were lousy, but the yawns were infectious! Even I was yawning. Try not to kill off your entire base. Another night like this and they'll die of boredom.

Pink has demanding change and calling for Trump to be voted out of office in 2020. She was also vocal in her support of the Black Lives Matter movement. "It is time for change. It is past time for change. We must throw out the old way because it is broken. Division, racism, it never wins, it never works, it never has... other than to cause pain and anguish and terror and loss. Shame, outrage, and anger - that's what every American should be feeling right now," wrote Pink. The singer demanded that America start addressing racism by voting Trump out of office. "We should be disgusted and embarrassed and inspired to change or be a part of the solution. Now is the time for real, meaningful action. I cannot wait to vote in November — for humanity and human decency and justice. I will see you at the polls," said Pink.

Trump ignored the advice of health experts and went ahead with the rally during the pandemic. The President held the rally even as 10 states, including Oklahoma, California and, Florida, reported their highest average of daily new Coronavirus cases. America has the highest Coronavirus casualties with more than 122, 000 deaths. It didn't help that some members of Trump's team at Tulsa tested positive for Coronavirus. According to NBC, Trump was “particularly angry that before he even left DC, aides made public that six members of the team in Tulsa tested positive for Coronavirus”.

Trump's campaign manager Brad Parscale had boasted that more than 1 million people had registered for the rally and claimed at least 100,000 were expected to show up the Tulsa venue, which has a capacity of 19,000. Tulsa Fire Department put down the crowd size at fewer than 6,200 people. It appeared that the Trump campaign was taken for a ride by K-pop fans and TikTok users, who organized coordinated efforts to ramp up the registration, reported The Guardian. It started after the Trump campaign promoted free registration online. A source close to the Trump campaign said "Jared and Ivanka are pissed at Brad over-promising on crowd size," reported CNN. However, Jared Kushner's representative dismissed the claims as false.

The "Antifa" that blocked the entry to Trump's rally. pic.twitter.com/N6jreD768s

Wait, kids on TikTok reserved the empty seats at Trumps rally?
The President was publicly trolled by our children. Have an extra drink tonight parents, you’ve done well.

Trump campaign spokesperson Tim Murtaugh said "Protesters interfered with supporters, even blocking access to metal detectors, which prevented people from entering the rally. Radical protesters, coupled with a relentless onslaught from the media, attempted to frighten off the president's supporters." Trump was furious with the size of the crowd and was said to be "furious" at the "underwhelming" event, reported The Guardian. Trump was said to be angry at Parscale for the debacle. Parscale blamed "a week’s worth of the fake news media warning people away from the rally because of Coronavirus and protesters.” A video of a dejected-looking Trump walking back to the White House from his helicopter after landing from Oklahoma summed up a terrible day for the President on the road.

This shot needed some scoring. I couldn't help myself. pic.twitter.com/dApSbLtuBP