Her boyfriend Michael Boulos also congratulated her on Instagram. "You've come a long way to get to this point and after all the hard work and sleepless nights,  you more than deserve it," he wrote. 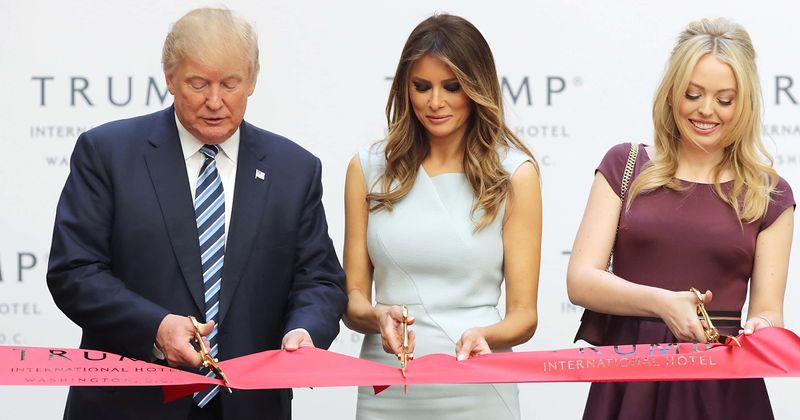 Tiffany Trump, daughter of Donald Trump and his second wife, Marla Maples, is now a Georgetown University graduate. The 26-year-old virtually graduated from law school on Monday amid the ongoing coronavirus pandemic, reports People. Her boyfriend Michael Boulos wrote on his Instagram story: Congratulations Tiffy! You've come a long way to get to this point and after all the hard work and sleepless nights,  you more than deserve it, it's only the beginning now, love you honey and congrats again. Georgetown Law made a video to celebrate its Class of 2020 graduates captioning it: Today you become Georgetown Lawyers. Though we look forward to the day we can gather and celebrate together, we hope this message brings a smile to your face as you mark this momentous occasion in your lives. You make us all so proud.

In September, Tiffany's mom Marla Maples shared two photos with Tiffany in honor of her daughter's first day of school at Georgetown University. One was taken before Tiffany headed off to class, and the other was a throwback to a picture that was snapped back in Sept. 1999, on Tiffany’s first day of kindergarten. Maples, 56, wrote a sweet message to her daughter, praising her for the hard work. She wrote:  I love you my girl and so proud of your commitment to your education and I thank God for the deep wisdom you possess beyond... I just wish I could still drive you to school 😁 like all those beautiful years in Cali, saying prayers together on the way.

Tiffany was raised by her mom after President Trump and Maples split in the ’90s. PEOPLE previously reported that the father and daughter have had a strained relationship in the past. In 2018, a source revealed, “Since the inauguration, Tiffany and her father have sometimes gone for months without speaking and she went a very long time without seeing him. The last time she was at a family function with him, it was awkward for her and she didn’t feel totally welcome. They always had a strained relationship her whole life, and it got exacerbated by the presidency,” the source continued. “It’s gotten much worse now.” Maples told PEOPLE in 2016, “That was my choice, raising [Tiffany] outside of the spotlight. Her daddy is a good provider with education and such, but as far as time, it was just me,” Maples recalled raising Tiffany largely on her own. “Her father wasn’t able to be there with day-to-day skills as a parent. He loves his kids. There’s no doubt. But everything was a bit of a negotiation.” Maples added that she still encouraged Tiffany to have a relationship with her father. “I would bring her into New York a couple of times a year and let her go see her dad in the office and let her go have dinner with him and [Donald’s wife] Melania,” Maples recalled.

A second source shared, “There are some who will tell you that Tiffany is not as much in the mix as his other children because he didn’t have a good relationship at the end with Marla. So Tiffany didn’t get to be as intimately involved with the family dynamic as Ivanka, Eric, and Donnie Jr.,” the source continued. “She doesn’t really talk about her dad a lot. She’s always been somewhat independent of the whole family.”

Back in 2016, Tiffany sat down for an interview with ABC's George Stephanopoulos, along with her half-siblings Donald Jr., Eric, and Ivanka. George told Tiffany that she is "not in the family business yet, you're still studying." Tiffany laughed, saying that yes, she had only just graduated from college. But when George asked her if she was interested in joining, she said "of course, I'm interested. I think — I'm applying to law school though so I like to bring — a different kind [of] skill set to the company." Ivanka told PEOPLE in 2016 that she and her half-sister have a special friendship despite living far apart. “We would see each other on all of the holidays and talk to each other frequently,” Ivanka said at the time. “She’s my little sister! I’ve been close to Tiffany her whole life, and I really love her.”